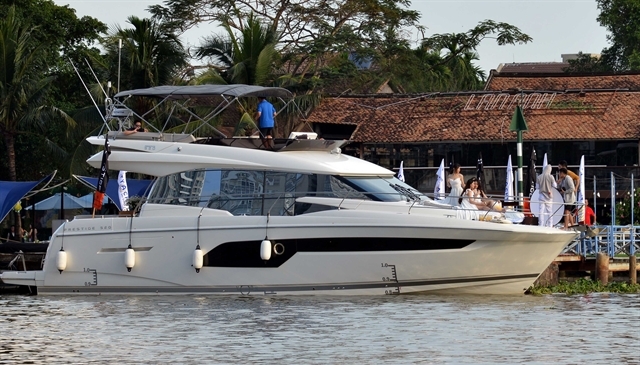 A Prestige 520 yacht is handed over to a buyer from HCM City. The Vietnam yacht market is booming with people lining up to buy boats. VNS photo

Global real estate consultant Knight Frank estimates that Vietnam has 142 people with a net worth of above US$30 million.

It forecasts the number of ultra-high net worth individuals in Vietnam to grow at the fastest rate in the world, increasing by 31 per cent in the next 5 years.

Pham Thi Bau, director of VietYacht Sài Gòn, told Vietnam News that people, especially in HCM City, have been buying yachts for over 10 years now, but often bought old ones since there were no authorised sellers in the country.

But now there are two companies selling them, she said.

Demand is strong, and her company has sold 20 yachts in just the last two years, she revealed.

In the next two months, one more Prestige 520 will be sold and an even more luxurious model would be unveiled in the next four months, she said.

Yacht traders said though the market is new, there has been huge demand, most of it for vessels costing VNĐ800 million-2 billion ($34,500).

Of these, 90 per cent are sold to individuals, they said.

They attributed the demand to the usefulness of yachts.

Bau said they are now used to organise small business meetings and birthday and year-end parties, meaning people would not buy them to lease out.

It is easy to find yacht leasing services online especially since it is becoming popular among young people. — VNS