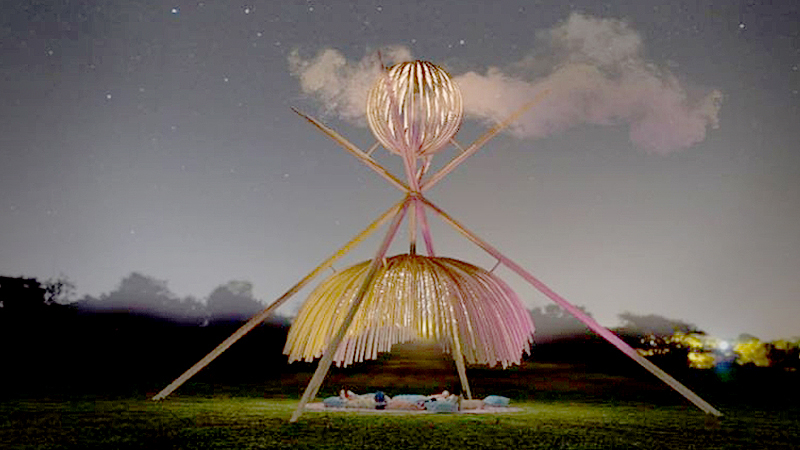 The lights “breathe” according to the pureness of the air. Some will ﬂicker, emulating people choking from pollution and some will pulse slowly, like steady inhalation and exhalation from a healthy atmosphere. The art installation is made out of recycled used and unwanted materials. Haiijaii aims to give a second life to the materials they use.

"In this modern single-usage era, we would like to restart the practice of giving a 'second life' to our once-loved items like bamboo woods, commercial neon signs and beach mats. These materials serve as visual stimulation for inspiring cohabitation in the world; the city, the forest and the beach, nourishing them, nourishing us," Ceekayello said.

Traditional commercial use of neon light peaked in the 1950s, where it became the inspiration for a lot of futuristic sci-ﬁ movies. With its downturn due to the rise of commercial LED neons and lightboxes as well as government regulations, neon became a declining and shrinking scene globally. However, in recent years, there has been an artistic revival to bring back the neon, as seen around the world in artworks, commercial spaces and signage. "We are reconstructing used and unwanted commercial neons, and giving them a new life in terms of visual shape and purpose. In Haiijaii, our art installation, each set with a neon piece would represent a country or region," Ceekayello said.

The Wonderfruit Festival has become one of Asia's biggest events. Known as the Asian “Burning Man”, it aims to be a celebration of art, music, food and ideas to catalyse positive impact on sustainability and lifestyle. In its sixth edition, Wonderfruit is being held from December 12 to 16 in Pattaya.