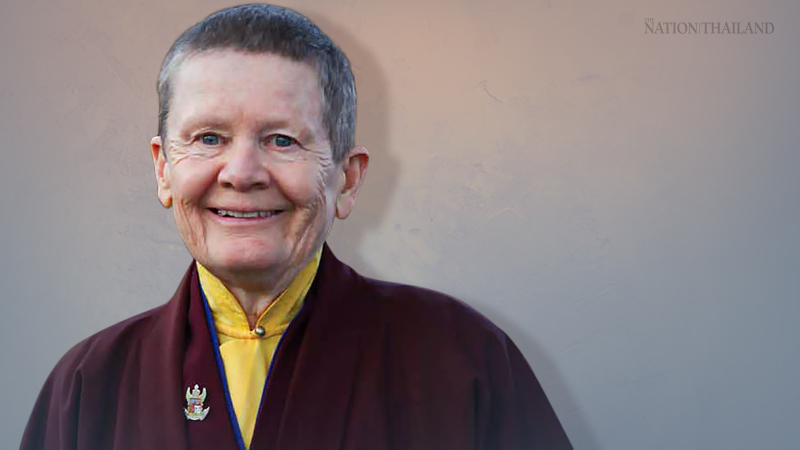 Sexual misconduct charges against its leader continued to roil the Shambhala Buddhist community this week, with famed nun and best-selling author Pema Chodron stepping down as a Shambhala teacher, saying adherents are "yearning for accountability."

The 83-year-old American nun has written multiple best-selling books, including "When Things Fall Apart" in 1996, and is one of the best-known faces of American Buddhism. She announced her retirement as a teacher in the Halifax, Nova Scotia-based global community in a Tuesday letter to the Shambhala board.

Chodron pointed to recent news that Sakyong Mipham Rinpoche, whose father founded the Shambhala movement and who has been the group's longtime spiritual leader, had been approved by the group's board to lead an initiation ceremony in Europe in June, as reported in the Buddhist news magazine Tricycle. "I was dumbfounded," Chodron wrote.

The sakyong, whose birth name is Osel Rangdrol Mukpo, had "stepped away" from teaching and administrative duties in 2018 after allegations of sexual abuse and misconduct were made against Shambhala teachers and leaders, including him, Tricycle reported Friday.

The community's board of directors resigned in 2018. A new, interim board hired an outside law firm to investigate. A report was released in February that found that Mukpo had in two cases probably forced himself on two women, Tricycle reported. The report, by the firm Wickwire Holm, also "painted a picture" that Mukpo in the 1990s and early 2000s frequently had sexual contact with women who were his students.

In a statement to The Washington Post on Friday, the Shambhala board did not comment on the sakyong's upcoming public role. It emphasized that Pema remains a part of the Shambhala community and that the board is in dialogue with her about trying to find a "path forward" together, the board statement said.

A spokesperson for Mukpo said he is on retreat and unavailable.

In two letters he wrote in 2018 addressed to the Shambhala community, the sakyong apologized to anyone he hurt and said he accepts responsibility for the pain he had caused. Citing the stress of taking over leadership of the community at a young age after his father's passing, and of an alcohol addiction, he said he is "like all of you, human and on the path," he wrote in June of 2018.

A few weeks later, in a second letter, he said he was in a "state of complete heartbreak, I write to you, humble, embarrassed, and thoroughly apologetic for disappointing you."

A message to Chodron's spokesperson was not immediately returned Friday.

Chodron appeared on Oprah Winfrey's "Super Soul Sunday" this past fall and has written several best-selling books. In her retirement letter, she acknowledged she had not been teaching in her Nova Scotia-based community for a while but felt that the reemergence of Mukpo, without what Chodron sees as a public accounting, made this seem like the right time.

"The seemingly very clear message that we are returning to business as usual distresses me deeply," Chodron wrote. "How can we return to business as usual when there is no path forward for the vast majority of the community who are devoted to the vision of Shambhala and are yearning for accountability, a fresh start, and some guidance on how to proceed? I find it discouraging that the bravery of those who had the courage to speak out does not seem to be effecting more significant change in the path forward."

Issues of sexual misconduct have been pushed to the forefront by Buddhist Project Sunshine, a group that investigates and hosts discussion about complaints related to alleged sexual misconduct and violence in Shambhala.

In 2018, Chodron publicly apologized for dismissing a woman who accused a different Shambhala director of rape. Chodron, the woman said, told her "I don't believe you," and, "If it's true I suspect that you were into it." The unnamed woman's allegation is in a 2018 Project Sunshine report that did not specify when the alleged conversation happened.

In a 2018 statement, reported on by the Buddhist news site Lion's Roar, Chodron said she apologized: "I was able to tell her that I feel very differently now; I believe what she told me and, going forward, I hope to be a better listener and not again say such insensitive and hurtful remarks to those who come to me for help."