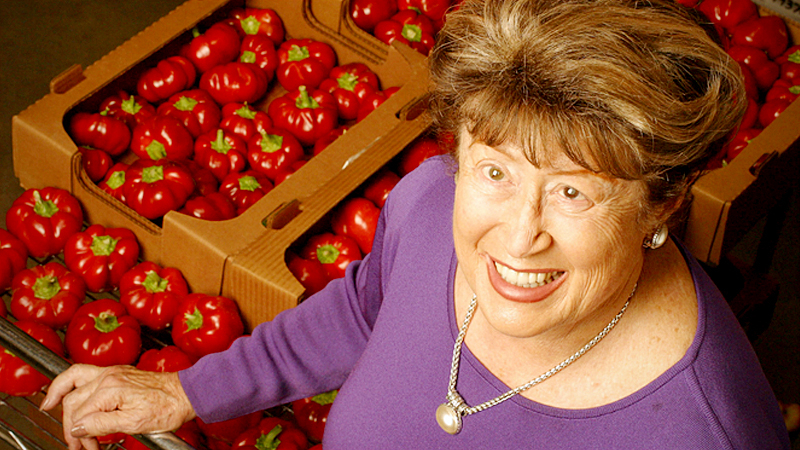 Frieda Caplan, shown here in 2003, displays the toma bella, a pepper and tomato hybrid. MUST CREDIT: Photo by Jonathan Alcorn for The Washington Post

Arriving each morning at 1 a.m., dressed in a skirt and heels and ready for work in the rough-and-tumble of the Los Angeles Wholesale Produce Market, Frieda Caplan stood out - an exotic exception, much like the wares she began selling there in 1962.

Among the many merchants peddling tomatoes, onions and other mainstays of the traditional American dinner table, Caplan was for many years the lone woman. The staples of her stand were not staples at all. Rather, she dealt in rarities - the kiwi when the furry brown fruit was known as a Chinese gooseberry, alfalfa sprouts before they were a favorite of health-food nuts, and avocados before the brunch crowd began eating them on toast.

With her ever-evolving array of offerings, which she sold to specialty shops as well as to chains including Safeway, Whole Foods, Trader Joe's and Costco, Caplan was credited with whetting the American appetite for dozens of once-rare fruits and vegetables that today are commonplace in groceries, kitchens and restaurants.

Caplan - known to admirers as the "Kiwi Queen" for her role in popularizing the fruit in the United States - died Jan. 18 at her home in Los Alamitos, California. She was 96. Her daughter Karen Caplan, the president and chief executive of Frieda's Specialty Produce, which is based in Los Alamitos, confirmed her mother's death but did not cite a specific cause.

Caplan had no experience in produce sales when she entered the trade in the 1950s as a bookkeeper for the wholesale operation run by her husband's aunt and uncle. She had recently given birth to Karen, her first daughter, and was seeking work that would provide the flexibility necessary to nurse the baby. The early-morning hours of the wholesale fruit-and-vegetable trade suited her perfectly.

As Caplan told the story, she was managing the stand while the owners were on vacation when a client placed a request for a quantity of mushrooms in the neighborhood of 500 pounds. Frantically searching for a supplier able to satisfy such a large order, Caplan personally drove to a mushroom farm to procure them.

Her spunk and grit so impressed the wholesale market landlords that they invited her to open her own stand. She did, in 1962, and it grew into the modern-day company with annual sales of $60 million, according to Karen Caplan.

When she was starting out, mushrooms and pineapple were considered exotic.

"We didn't have innovative produce departments," she told the New York Times in 1985. "The mindset of produce merchandisers was potatoes, onions, grapefruit and apples. It was a matter of finding people who were innovative and progressive and getting them together with people who had something to offer."

Chief among them was Caplan, and chief among her early successes was the kiwifruit - according to a profile of Caplan published last year in The Washington Post, "the first commercial fruit ... introduced to the United States since the banana in the 1880s."

When a client first requested the Chinese gooseberry, six months went by before she could locate one, Caplan told the Los Angeles Times. In an attempt to increase sales, she marketed the item as kiwifruit - a name suggested by a colleague in the supply chain because the fruit, which was grown in New Zealand, looked like the local kiwi bird.

The fruit took time to catch on - 18 years, by Caplan's count - but today it is scarcely harder to find than a peach or pear. The New York Times once dubbed the kiwi "the Horatio Alger of exotic fruit."

"I couldn't compete with all the boys on the big items," Caplan told the Pasadena Star-News (California) in 2003, "so I built the business selling things that were different."

She further distinguished herself from other vendors by packaging and labeling her more unusual offerings, a godsend to head-scratching grocery store clerks as well as to consumers who might not know how to serve jicama, or how to slice into a kiwano. (Late-night television host David Letterman, who once featured Caplan on his show, jokingly pronounced the latter fruit, also know as the horned melon, as "d--- near inedible.") Customers were invited to send away to Frieda's for recipes; everyone, she said, received a reply.

Caplan stopped selling items when they became standard fare; by then, she reasoned, her work was done. She once received an industry award honoring the Produce Man of the Year. She declined to accept it until it was renamed the Produce Marketer of the Year.

Frieda Rapoport, a daughter of Jewish immigrants from Russia, was born in Los Angeles on Aug. 10, 1923. Her father was a pattern-cutter for a clothing factory, and her mother was a homemaker. She once recalled to USA Today that when she brought home $2 in earnings from her after-school job at a five-and-dime store, her mother exclaimed, "How wonderful. You'll never be dependent on a man again."

She studied political science at the University of California at Los Angeles, where she was active in student government and graduated in 1945. In 1951, she married Alfred Caplan, a labor relations consultant. He died in 1998.

As she was growing her business, Caplan once told the Orange County Register, she slept four hours a night. "The opportunity to introduce people to new fruits and vegetables was very exciting," she said. One fruit she could not enjoy was the kiwi; she was allergic to it.

She was featured in the 2015 documentary "Fear No Fruit" by filmmaker Mark Brian Smith and said that she "never had a problem with the men on the market, at all."

"Once they got over the fact that I was a woman and they learned they could make money with the items I was selling," she said, "I had no problems."

For all her success stemming from her entrepreneurial spirit, Caplan sought to give credit where she thought credit due, and that was to the fruits and vegetables she sold.

"There have always been exotic food items," she told the Los Angeles Times in 1972. "We just showcased them, dressed them up and sold them."