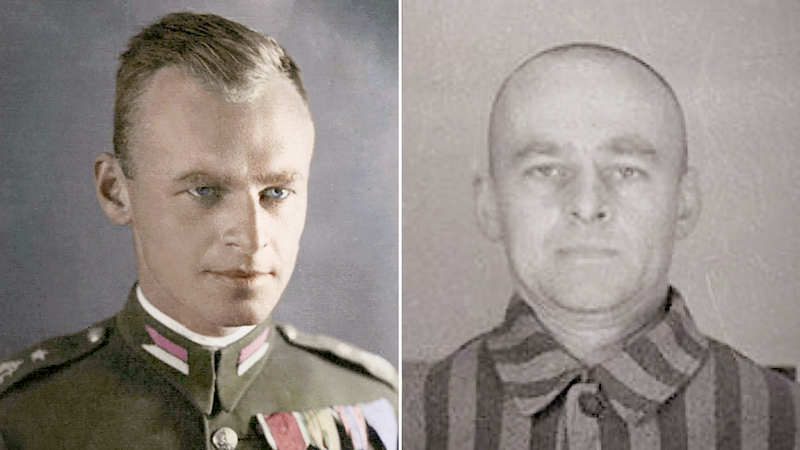 Left: A colorized portrait of Witold Pilecki sometime before World War II. Right: Pilecki as prisoner No. 4859 in Auschwitz in 1941. MUST CREDIT: Auschwitz-Birkenau Museum and Memorial

It wasn't until the 1990s that Zofia and Andrzej Pilecki found out their father was a hero. As teens in postwar Poland, they had been told he was a traitor and an enemy of the state, and they listened to news reports about his 1948 trial and execution on the school radio.

In fact, Witold Pilecki was a Polish resistance fighter who voluntarily went to Auschwitz to start a resistance, and he sent secret messages to the Allies, becoming the first to sound the alarm about the true nature of Nazi Germany's largest concentration and extermination camp.

Auschwitz was liberated 75 years ago on Monday. In a new book, "The Volunteer: One Man, an Underground Army, and the Secret Mission to Destroy Auschwitz," former war correspondent Jack Fairweather unearths the story of Pilecki's heroism.

Pilecki (pronounced peh-LET-skee) was born into an aristocratic Polish farming family in 1901. As a young man, he fought against the Soviets in the Polish-Soviet War, earning citations for gallantry. Upon inheriting the family land, he took up the life of a country gentleman, married and had two children.

When the Nazis invaded Poland in 1939 at the start of World War II, Pilecki was called back to military service. But Poland fell in less than a month, split by the Nazis and the Soviets. Pilecki went into hiding and joined the burgeoning Polish resistance.

"The French resistance is so famous, but in actual fact, over half of all the intelligence from continental Europe to reach London came from the Polish underground," Fairweather said in an interview with The Washington Post. "It was the biggest operation in Europe, and they provided the highest-quality intelligence - much prized by the Allies - about German capacity and war production."

As the Nazi occupation's grip tightened on Polish Jews, some Poles turned against Jews, too, while many others secretly helped their Jewish neighbors. The leader of Pilecki's resistance cell pushed to make the group Catholic-only. Pilecki was a Catholic, but he argued against the change and pushed successfully to unite the group with a mainstream resistance cell that believed in equal rights for Jews.

"When (the Nazis) are doing their best to try and atomize society and break down the bonds between Poles, Pilecki doesn't turn inwards, he doesn't retreat into his ethnicity or his class," Fairweather said. "He actually does the complete opposite, and begins to reach out to those around him."

Then Pilecki got his first big mission: get arrested and sent to Auschwitz. At the time, the site run by Germany in occupied Poland was known to be a Nazi work camp for Polish prisoners of war. Pilecki was to gather information about conditions inside and organize a resistance cell, perhaps even an uprising.

The dangerous mission was voluntary; he could have refused. On Sept. 18, 1940, he placed himself in the middle of a Gestapo sweep and was sent to Auschwitz.

Nothing could have prepared him for the brutality he found. As he leaped out of a train car with hundreds of other men, he was beaten with clubs. Ten men were randomly pulled from the group and shot. Another man was asked his profession; when he said he was a doctor, he was beaten to death. Anyone who was educated or Jewish was beaten. Those remaining were robbed of their valuables, stripped, shaved, assigned a number and prison stripes, and then marched out to stand in the first of many roll calls.

"Let none of you imagine that he will ever leave this place alive," an SS guard announced. "The rations have been calculated so that you will only survive six weeks."

The mass gassings that came to define the Holocaust had yet to begin, but the crematorium was up and running. The only way out of Auschwitz, another guard said, was through the chimney.

Thus began 2½ years of misery. As Pilecki and other prisoners starved, lice and bedbugs feasted on them. Typhus outbreaks regularly ranged through the camp. Work assignments were exhausting. Guards delighted in punishing them. Prisoners, in desperation, stole from and betrayed one another for scraps. Many killed themselves by leaping into the electrified fence.

But slowly, Pilecki organized his underground. At first it was just a few men he knew from before. In the end, there were nearly a thousand. They formed a network to steal and distribute food and extra clothing, sabotage Nazi plans, hide injured and sick prisoners, and improve morale with a sense of brotherhood and regular news from the outside world.

"With almost a thousand men by 1942, and - barring for one incident with a Gestapo spy - not one of Pilecki's men betrayed each other, in extraordinary circumstances of starvation and violence," Fairweather said. "He built something really powerful in that camp."

Starting in October 1940, the underground worked together to smuggle messages to the resistance outside. The first was sent via prisoner Aleksander Wielopolski. In Auschwitz's early days, a few prisoners were able to secure their release if their families paid big enough bribes. Wielopolski was one of those few. Rather than risk smuggling out a paper report, Pilecki had him memorize it.

Once free, Wielopolski passed the message on to Pilecki's friends in the resistance. Pilecki never knew whether his reports reached the Allies, but Fairweather and his researchers were able to track down how they were smuggled across Europe to the highest levels in London.

His first message was blunt: Bomb Auschwitz. Even if it meant killing everyone inside, himself included, it would be merciful. Conditions were horrifying, and the Nazis had to be stopped, he implored.

The British considered Pilecki's request in early 1941, Fairweather found, but ultimately decided against it. The United States had not yet entered the war, and the British Royal Air Force was down to fewer than 200 planes, all of which lacked radar. It would have stretched the limits of their fuel capacity. And the British had no precedent to take action for humanitarian reasons.

Over the next two years, Pilecki continued to send messages to London via risky escapes by his men and notes passed to Polish farmers neighboring the camp.

Each message was more dire: The Nazis were conducting disgusting medical experiments on patients in the camp hospital. The Nazis killed thousands of Soviet POWs in a mass execution. The Nazis were testing a way to gas prisoners en masse. The camp was expanding. Huge trainloads of Jews were being gassed and cremated. Hundreds of thousands of men, women and children were being murdered.

"Pilecki, by recording every step of the camp's evolution towards the Holocaust, he was in some ways grappling with the very essence of the Nazi's evil before anyone else," Fairweather said.

Pilecki kept asking: Couldn't the Allies at least bomb the train lines leading to the gas chambers? Or create a distraction so the prisoners could try to rise up and escape?

Fairweather said he gained a lot of sympathy for the British from their initial decision not to bomb the camp. But later, when the United States joined the war, bringing a far superior air force, continuing that decision "becomes untenable," he said. The Allies fell back on the original decision without considering that both the necessity and their capabilities had changed.

Not bombing Auschwitz is "one of history's great might-have-beens," Fairweather said.

By spring 1943, it was clear the Allies weren't going to help the prisoners of Auschwitz. Without any outside help, an uprising would never succeed. Increasingly frail and in danger of being found out, Pilecki decided it was time for him to leave.

It took months to plan, but he and two friends pulled off an incredible escape through the camp bakery in the early hours of April 27. From there, he sneaked into Warsaw, where he was briefly reunited with his wife and children.

Pilecki began working for the resistance again, but the symptoms of what we might now call post-traumatic stress disorder dragged him down. He "struggled to connect" with his friends and family, according to Fairweather, and wrote day and night about the horrors he had witnessed. He even returned to Auschwitz after the war, where he found other former prisoners living in their old barracks and giving tours to the curious.

In the summer of 1944, the Soviets were advancing on the German army, pushing them westward and out of Poland. The Polish resistance hoped to kick the Germans out of Warsaw ahead of the Soviets' arrival to re-establish a sovereign state. Pilecki was one of thousands who fought in the Warsaw Uprising, the largest action taken by a European resistance group in World War II. In the end, the Soviets held back their advance so the Nazis could crush the Poles. Then they swooped in and took over.

The Soviets liberated Auschwitz on Jan. 27, 1945. By then, 1.1 million people had been killed there, most of them Jews.

"For a lot of us in the West, we think of May 1945 as the end of the Second World War in Europe, and parades and so on," Fairweather said. "Pilecki's story is a powerful reminder that what happened in Eastern Europe was the Allies gave (Soviet leader Joseph) Stalin a free hand to occupy and subjugate half of continental Europe. And the war didn't end for so many people."

Poland would spend the next four decades as a communist puppet state behind the Iron Curtain. But Pilecki didn't see much of it. He remained loyal to the idea of a free Polish republic and continued sending messages to British intelligence. He was arrested by communist authorities in 1947, tortured repeatedly and executed as an enemy of the state the next year.

According to a Polish newspaper, as he was led to his death, he said, "I've been trying to live my life so that in the hour of my death I would rather feel joy than fear."

Pilecki's reports remained hidden away in Polish archives until the 1990s. Now he has been showered with posthumous awards and hailed as the hero he was. A documentary about him is scheduled for release this year.

He is also a symbol of the way many Poles were forced to bury their war experiences for decades, Fairweather said, comparing it to if the American heroes of D-Day had been treated as traitors and pariahs.

That reckoning continued as leaders from all over the world gathered in Israel on Thursday to commemorate the liberation of Auschwitz. In attendance was Russian President Vladimir Putin, who has recently spread misinformation about the Poles during World War II. He was given a top speaking role at the ceremony, prompting Polish President Andrzej Duda to boycott the event.

Duda is expected to attend a commemoration ceremony at Auschwitz on Monday. Zofia and Andrzej, now 86 and 88, will not be there, Fairweather said - they prefer to honor their father on the day of his execution. For years under communism, Zofia would light a candle alone outside the prison walls where her father was killed. Last year, hundreds of people joined her.