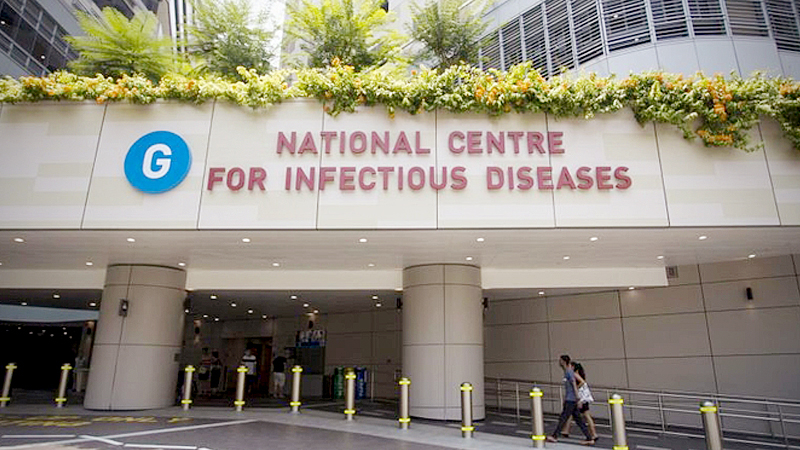 The 56-year-old woman from Wuhan, who arrived in Singapore with her family on Jan 18, is currently warded in an isolation room at the National Centre for Infectious Diseases and her condition is stable.PHOTO: LIANHE ZAOBAO

By The Straits Times /ANN

SINGAPORE - The Ministry of Health (MOH) has confirmed a fifth case of Wuhan coronavirus infection in Singapore.

The patient is a 56-year-old female Chinese national from Wuhan who arrived in Singapore with her family on Jan 18.

The patient was asymptomatic during the flight to Singapore.

She subsequently developed symptoms on Friday and was conveyed by ambulance to Tan Tock Seng Hospital on Sunday. She was classified as a suspect case and immediately isolated at the National Centre for Infectious Diseases (NCID).

Subsequent test results confirmed Wuhan virus infection on Monday, said MOH. She has no known links to the other confirmed imported cases.

Before being admitted to hospital, the patient stayed with her family at their home in Ceylon Road.

Since the onset of symptoms on Friday, she had remained in her home until she was brought to the hospital on Sunday, MOH said.

She is currently warded in an isolation room at the NCID and her condition is stable.

MOH said it has started epidemiological investigations and contact tracing to identify individuals who had close contact with the patient.

In its statement, the MOH also provided updates on other suspected cases.

It said that as of 2pm on Monday, 62 of the patients previously classified as suspected cases have tested negative for the coronavirus and five tested positive.

Test results for the remaining 57 suspected cases are still pending.

The MOH said contact tracing for the confirmed cases is still ongoing, adding that it has identified 115 close contacts from the first four confirmed cases.

Of the 86 contacts who are still in Singapore, 75 have been contacted and are being quarantined or isolated, the ministry said, adding that efforts are ongoing to contact the remaining 11.

“Once identified, MOH will closely monitor all close contacts. As a precautionary measure, they will be quarantined for 14 days from their last exposure to the patient.

“In addition, all other identified contacts who have a low risk of being infected will be under active surveillance, and will be contacted daily to monitor their health status.”

The ministry also advised the public to defer all travel to Hubei Province and all non-essential travel to mainland China.

It also said all travellers should monitor their health closely for two weeks upon return to Singapore and seek medical attention promptly if they feel unwell. They should also inform their doctors of their travel history.

If they have a fever or respiratory symptoms such as cough or shortness of breath, they should wear a mask and call the clinic ahead of the visit, the ministry said.

The MOH also advised the public to avoid contact with live animals, including poultry and birds, and consumption of raw and undercooked meats.

It also said to avoid close contact with people who are unwell or showing symptoms of illness, observe good personal hygiene and practise frequent hand washing with soap.

“MOH will continue to monitor the situation closely. As medical practitioners are on the lookout for cases with pneumonia who have recently been in China, Singapore is likely to see more suspect cases that will need to be investigated for possible links to the Wuhan cluster.”