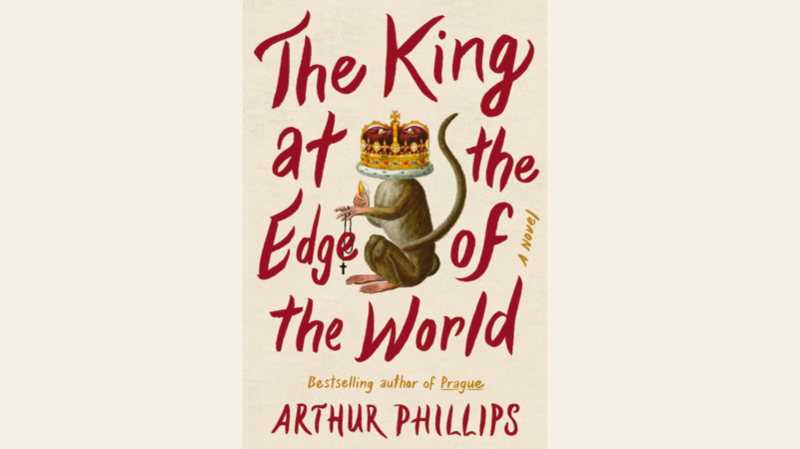 "The King at the Edge of the World" by Arthur Phillips. MUST CREDIT: Random House

"The King at the Edge of the World" By Arthur Phillips Random House. 288 pp. $27 ---- Centuries from now, when our amphibian descendants look back at this contentious era, they may have trouble understanding what exactly we were arguing about.

I first realized this when I was teaching high school and saw my students struggling to fathom the theological disputes of the Reformation. To most of those smart but unchurched adolescents, the distinction between, say, being saved by grace or saved by works seemed obscure - and, in any case, a thin excuse to butcher fellow Christians in the name of divine love.

Nobody has ever satirized our fixation on such immaterial differences better than Jonathan Swift. In the first voyage of "Gulliver's Travels," the tiny people of Lilliput are locked in a ferocious battle with the tiny people of a neighboring island who insist - against all decency! - on breaking their boiled eggs on the big end instead of the little end. We are creatures, Swift suggests, more enamored of certainty than reason.

Arthur Phillips explores this human tendency and much more in his rich historical novel "The King at the Edge of the World." A former "Jeopardy!" champion, Phillips has always been interested in the search for truth - and the strange dynamics of that quest. His first novel, "Prague," begins with a group of young travelers sitting in a Hungarian cafe playing a game: Each person makes four "apparently sincere statements," only one of which is actually true. Whoever fools the greatest number of players wins.

Now, with his signature wry humor, Phillips has recast that idle game in the tense world of early 17th-century European politics. As Queen Elizabeth lies dying, everyone is making "apparently sincere statements," almost none of which are actually true. Whoever fools the greatest number of players wins.

The novel opens around 1600, when England has enjoyed a long period of domestic respite from sectarian turmoil. During her shrewd rule, Elizabeth has managed to keep the country Protestant and repel the attacks of Roman Catholics. But now that she's about to receive her heavenly reward - without leaving an heir - England risks slipping back into spiritual chaos with all its attendant bloodshed. Unfortunately, to speak or even to think of the queen's eventual death is an act of treason, which makes planning for a successor terribly inconvenient. But her counselors have secretly identified the best candidate: the King of Scotland, Elizabeth's cousin, James VI. The fact that James is obsessed with witches and may be sleeping with a pretty young man is troublesome, but not a dealbreaker. What really worries the royal advisers in London is that James may be a covert Catholic - a tool of Rome playing the long game to wrest England back to popish abomination.

All this historical and theological detail is not so much the content of the novel as its premise, which sets the bar for entry fairly high. But Phillips is a terrifically engaging teacher, and he's devised the perfect guide. The protagonist of "The King at the Edge of the World" is Mahmoud Ezzedine, a Muslim physician who knows nothing of Britain or the incomprehensible intricacies of its "false religion." As the novel begins, Ezzedine is sent to accompany the ambassador of the Ottoman sultan on a diplomatic mission to Queen Elizabeth. It's a dismal assignment to a cold and ignorant land, but Ezzedine is a faithful servant and assumes he'll soon return to his loving wife and son.

Those travel plans get rather dramatically revised once the good doctor arrives in court, which is sad for him but wonderful for us. Endlessly detained and passed off from one host to another, Ezzedine is an ingenious foil for exploring the treacherous territory of Elizabethan England. He's essentially a Turkish Gulliver, continually astonished by the strange ways of these backward people who treat him with such condescension even while depending on his medical knowledge.

Phillips laces Ezzedine's sojourn in England with melancholy wit, but the novel's real energy comes from its exploration of two related industries that flourished under Queen Elizabeth: theater and spycraft. While Shakespeare's men and his competitors are playing their many parts upon the stage, a vast network of spies is acting out across Europe. And as the queen's death grows imminent, spooks of every denomination are desperate to determine the true nature of King James' faith.

The Turkish physician would seem a ludicrous candidate for the leading role in this treacherous drama. After all, despite his best efforts to pay attention, the distinctions between Catholics and Protestants strike him as minuscule. But clandestine forces in Her Majesty's service believe Ezzedine could be the perfect spy to lodge in James's dank castle on the edge of the world. All he has to do is diagnose - with scientific certainty! - whether the Scottish king is infected with the "damnably contagious" disease of Roman Catholicism.

It's an absurd assignment, of course, but no different from other plots and counterplots of the era. And, in fact, not so different from the challenges we face in our own hyper-political times, struggling to discern the hearts of candidates who are far from ideal. What values do they really hold dear? Which philanderer truly abhors abortion? Which representative addicted to lobbyists' bribes will really pass campaign finance reforms? Could a senator who has called someone a dangerous kook later become that dangerous kook's most rabid sycophant?

We may have better science than the Renaissance, but we still have no medicine or magic capable of divining our leaders' souls. And yet now, as then, the fate of the realm depends upon such knowledge.

Tags:
The King at the Edge of the World Book world