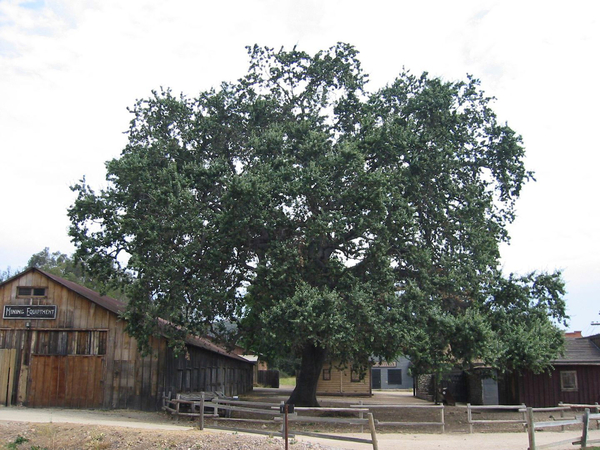 The Witness Tree at Paramount Ranch's Western Town when it was healthy, in an undated photo. MUST CREDIT: National Park Service

Even in death, the Witness Tree looked alive. With twin trunks and a regal crown of tangled branches, the gigantic valley oak stood in the middle of Hollywood's Paramount Ranch for at least a century, perhaps witnessing enough films to rival Roger Ebert.

It witnessed the making of silent movies and TV westerns, fake gunfights and real car crashes. It saw Bob Hope in "Caught in the Draft" and Sandra Bullock in "The Lake House." And it witnessed weddings and parties too, hosting hundreds of guests beneath its leafy outstretched branches.

But early in the morning of Nov. 9, 2018, it witnessed something frightening. The flames of Southern California's Woolsey Fire ravaged through the Santa Monica Mountains, taking out a stand of willow trees before surging onto Paramount Ranch. The entire Western Town's Main Street, recently the set of HBO's "Westworld," burned to the ground.

The tree's bark was charred black. Its bare branches looked spindly and skeletal. Yet despite all the destruction in the 750 acres around it, the Witness Tree was somehow still standing.

The National Park Service, which oversees the historic movie ranch, kept hoping that the tree would come back to life, maybe next year.

They declared the beloved tree dead.

On Saturday, the National Park Service will host a memorial service for the Witness Tree, so people can pay their respects to the majestic valley oak before it is cut down.

It will be, in some ways, just like a funeral: The Park Service will set up easels, displaying pictures of the tree over the course of its life, through movies and weddings and events. Paramount Ranch film historians will tell stories, tracing the valley oak's journey through a diverse amount of pretend film landscapes.

"We wanted to give folks an opportunity to say goodbye," Cholo told The Post.

No one quite knows how old the Witness Tree was when it died. Given its size, 100 inches in diameter at breast height, Cholo said the park's plant specialists believe the tree is likely more than 100 years old.

"It may have even witnessed the settlement of Native Americans, the Chumash, who are the historic native people who inhabited these lands," Cholo said.

It witnessed, at the very least, the settlement of Paramount Pictures in 1927, when the company purchased 2,700 acres of what was then called Rancho Las Virgenes, a former Spanish land grant. In the ensuing years, the ranch would be transformed into a cascade of distinct worlds, ranging from colonial Massachusetts in the "Maid of Salem" to ancient China in "The Adventures of Marco Polo," according to the Park Service.

Cary Grant, Gary Cooper, Marlene Dietrich and later even Elvis Presley and Sylvester Stallone starred in films on the set.

The ranch's western-themed heyday would arrive in the '50s, in the glory days of the TV cowboy. William Hertz, an entrepreneur who moved out west aspiring to be a real cowboy, bought a portion of the land not far from the first Ronald Reagan Ranch, according to the Malibu Times. There, he built a new Western Town out of old Paramount prop storage sheds and studio buildings.

With dusty streets and mountains in the backdrop, the revitalized ranch would become the set for popular westerns including "The Cisco Kid," "Gunsmoke," and much later, the '90s drama "Dr. Quinn, Medicine Woman."

The Park Service ultimately bought the site in 1980, opening it to the public.

Since the fire, the Santa Monica Mountains Fund has been set up to help rebuild the town and return the site to its former glory.

Only a few buildings survived the blaze, including a stately white church built for "Westworld" and a train station from "Dr. Quinn, Medicine Woman." Debris still litters the landscape, and a chain-link fence surrounds the decaying Witness Tree.

"It really did put up a good fight," Cholo said of the tree's efforts to revitalize itself. "It even put out some leaves shortly after the fire. But it just seemed like it couldn't hang on."

Cholo said it will be felled within the month. Once it's chopped down, arborists will count its rings to discover its exact age. Then, in wooden benches and signs and hitching posts, the Witness Tree will live on.