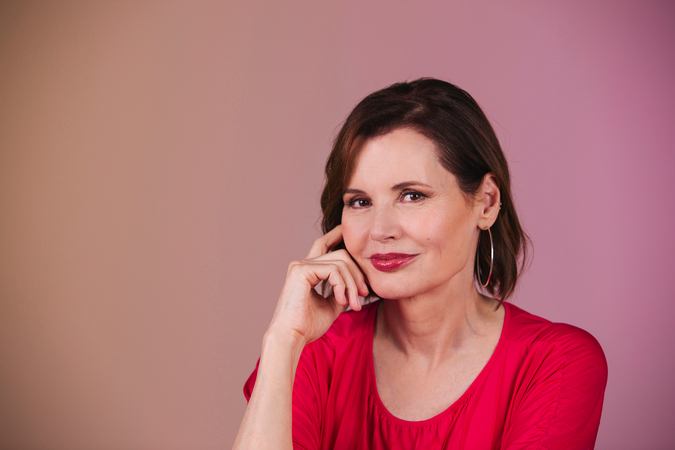 Geena Davis will be recognized Sunday at the Oscars after receiving the Jean Hersholt Humanitarian Award for her work in promoting gender parity on screen. MUST CREDIT: Photo for The Washington Post by Brinson+Banks

LOS ANGELES - Geena Davis arrives for lunch at a beachside hotel looking as understated as humanly possible for one of Hollywood's most recognizable celebrities. Dressed modestly, her hair in a bob and her famously sculpted cheekbones and pillowy lips adorned with minimal makeup, she makes small talk about the brush fires raging just two miles from her Los Angeles home, where she lives with her three teenage children. "I've never gotten so many texts in my life," she says of concerned acquaintan

Davis speaks softly and with careful consideration, her thoughts often giving way to free-associative digressions. It's October, and she looks preternaturally relaxed for someone who, in a few days, is scheduled to deliver a speech at one of the movie industry's most exclusive events. Davis was being honored at the Governors Awards of the Academy of Motion Picture Arts and Sciences, where she would receive the Jean Hersholt Humanitarian Award for her work in promoting gender parity on screen. It promised to be a tough room, as sexism and what to do about it continue to fuel contentious debate in certain precincts. But Davis is unfazed.

"I never get nervous - I have ice water in my veins," she says simply, adding that she hasn't even begun writing her prepared remarks. "I think that may be part of why I was attracted to acting. There's a gun to your head. You have to do it right now. That's been me forever."

On Sunday, Davis and her fellow recipients of honorary Academy Awards will be recognized from the stage during the Oscars telecast and required only to smile and soak up the love. But let the record reflect that, when the Governors Awards ceremony took place on Oct. 27, her speech was a barnburner, with Davis striking an irresistible balance of the humor, hard data and friendly persuasion that has made her such a quietly effective advocate for the past several years. After a few self-deprecating jokes, she shared a dispiriting statistic about how rarely films depict women holding jobs. ("We make it worse than the crappy reality.") She then gently chided her colleagues for continuing to write and produce scripts that lack diversity, not only when it comes to gender, but a wide range of underrepresented groups.

"People characterize us Hollywood types as bleeding-heart liberals," she observed. "Hardly. If we're supposed to be a bunch of gender-fluid intersectional feminists, then by God let's do it up right. Let's live up to our label!"

Davis has earned the right to scold, however lightheartedly. In 2004, when she started watching TV shows with her then-toddler daughter, she was "floored" by the paltry number of girls in preschool-oriented programs. When Davis brought it up to her colleagues, she recalls, "they all said, 'Yeah, but that's not true anymore.' So that made me think this is completely unconscious, and therefore data would make a big difference."

Using her own money, as well as funds she raised, Davis financed the largest research study ever conducted on gender in children's entertainment, with the results confirming her hypothesis that male characters far outnumbered female characters on screen, presenting a skewed version of reality and perpetuating the damaging idea that boys are more valuable and interesting than girls.

Davis could have stopped there, content to sign off on a ghostwritten op-ed or become the face for a nonprofit's well-meaning PSA campaign. Instead, she founded her own nonprofit: the Geena Davis Institute on Gender in Media at Mount St. Mary's University, which collects data on the representation of women and girls in television shows, movies and advertisements and then shares it with content creators. (Davis has focused on children's media on the assumption that "people who do kids' entertainment care about kids. So once they learned what they were doing wrong, they'd want to change it.")

In October, Davis revealed that Disney would be a pilot partner in using the tool GD-IQ: Spellcheck for Bias, software that analyzes scripts for representation across gender, ethnicity, sexual orientation and varying abilities. But even before that announcement, her efforts had begun to show stunning results: Earlier in the fall, her institute announced that gender parity had been achieved in lead and co-lead roles in children's television shows. This past New Year's Eve, Davis received news that the same benchmark had been reached in family films.

"I did handsprings when I heard the TV results, and I did a double backflip when I heard the film results," she says. "This is one of the huge pieces of what the whole institute was established to accomplish."

What Davis set out to accomplish is nothing short of "world domination," according to Geena Davis Institute CEO Madeline Di Nonno, who recalls her using that phrase when they started working together. "She set forth a very specific thesis, with a very specific theory of change, and now she's able to say, 'My theory of change worked.' And on the heels of that, now we can say we've achieved gender parity in family films for the first time in history." (There's good news for adult-oriented movies as well: The USC Annenberg Inclusion Initiative just released a study that found 43 percent of lead or co-lead characters in the top 100 films of 2019 were female, a 13-year high.)

For Davis, the sea change has often been achieved one consciousness at a time. Producer Amy Pascal, who worked with Davis on the 1992 movie "A League of Their Own" and 1999's "Stuart Little," recalls a moment years after the latter film was released, when Davis showed her a still photograph of a scene set at the boat pond in Central Park. "Every man who was an extra is holding a newspaper, an umbrella, a briefcase, a (toy) boat," Davis told Pascal. "And every woman is holding nothing. Nothing."

Pascal says she was "mortified" by the message that sent about female agency. "I was focused on getting these movies made," she says, "never on the specifics of what we are telling people."

A key element in Davis' strategy is never naming and shaming, an ethos she adopted from the very beginning, Davis says. "One, I work in the industry, and I wanted these exact same people to keep hiring me," she explains. But she also says that, especially when it comes to children's media, "there's no reason to use a cudgel to tell them this information. ... The data almost does the work for us."

Davis's style is also of a piece with her personality, which is reserved, but also disarmingly confident. Growing up in Wareham, Massachusetts, as a tall girl (6 feet) and a natural performer, she was taught that "being nice was the most important thing in the universe" and that she had to temper her most spontaneous inclinations if she was to succeed.

Davis remembers watching a friend's ballet class and being invited to participate by the teacher. "Everybody was leap-leap-leaping across the room, so when it was my turn, I leap-leap-leaped across the room. And she looked at me and said, 'You may sit down.' Like somehow I'd shamed myself."

She also recalls the sting of being told by an aunt who was a role model: "You're going to have to work on your laugh because boys aren't going to like that."

The fact that those memories are still so vivid and painful, she says, must hold deeper meaning. "Something must have told me even then that it was incredibly unfair."

Luckily, Davis - who describes herself as a class clown despite her shyness - held on to her sense of humor. Producer and longtime television executive Nina Tassler was Davis' roommate when they were studying acting at Boston University in the 1970s. She recalls being asked to leave a history of theater class when she cracked up at Davis, who had turned to her and stuck out her tongue, revealing a tiny toy truck that she proceeded to push around her face.

Later, in a stage combat exercise, Davis masterminded a bit where she and the 5-foot Tassler played conjoined twins, complete with giant rattles and baby bonnets. Davis' comic timing and penchant for the absurd, Tassler says, "is why she has won the hearts and minds of an entire industry when it comes to making a point. Because it always incorporates irreverence and humor and irony. It's one of the hallmarks of her means of communicating."

Even when Davis made a screen debut that would reduce seasoned veterans to a pulp, she maintained her signature brand of quiet self-belief. The movie was 1982's "Tootsie," and after a couple of takes, the film's director, Sydney Pollack, took Davis aside. "He says, 'Let me ask you something,' " Davis recalls. " 'Why are you not nervous? It doesn't make any sense to me. You're in your underwear doing your first scene in a movie with Dustin Hoffman. Why are you not nervous?' And I said, 'Oh, I don't know. Was I supposed to be?' "

In her mind, she insists, all she was thinking was, "Hot dog, this is what I'm supposed to be doing!"

Davis won an Oscar in 1989 for her role as an eccentric dog trainer in "The Accidental Tourist," which, combined with her distinctive looks, threatened to pigeonhole her in the kind of "quirky" roles she instinctively mistrusted. "I remember getting sent a lot of scripts where the female character was really boring and they thought that by (casting) me it would become interesting and colorful."

It wasn't until the early 1990s, when she co-starred with Susan Sarandon in the road picture "Thelma & Louise," followed by the baseball comedy "A League of Their Own," that Davis began to "think about the parts I said yes to." From that point on, she decided "to look for parts where I feel good about the women in the audience identifying with my character." Not that she only wants to play role models or "strong female characters" (a term she abhors). "I want female characters who are f---ed up and flawed and everything we want to see in characters."

When Davis, who turned 64 last month, told her friends and co-workers that she was forming her own nonprofit, some thought it would torpedo her career. But the many presentations and speaking gigs she does every year have only strengthened her relationships within the industry.

Her most recent role was a recurring character on the Netflix series "Glow," and she's also been hoping to reboot the lamentably short-lived 2005 TV series "Commander in Chief," in which she played the U.S. president. ("I think if my show had stayed on longer, we would have had a female president by now.") Failing that, she'd love to explore what the world of burgeoning platforms has to offer.

"I want a streaming show where I'm a badass," she says conspiratorially.

In the meantime, when she waves to the crowd in the Dolby Theater on Oscar night, Davis will be savoring the fact that she's receiving a humanitarian award for advancing the radical notion that women are fully human.

"What I always say is, this is not controversial," she says. "We're asking that the on-screen population reflect real life. That's all you've got to do. Reflect real life. Don't make it worse."