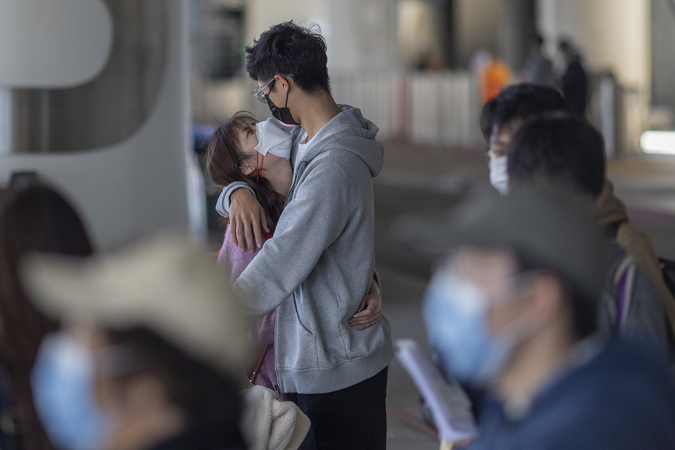 There's nothing like a quarantine or an international travel ban to test a relationship.

Gabrielle Autry, a 26-year-old American from Georgia living with her Chinese boyfriend in Hangzhou, China, suddenly experienced this firsthand. Hangzhou is the capital of Zhejiang province, one of the worst-hit by the coronavirus outbreak that has killed at least 720 people and infected more than 34,000 in China since December. The world around her is on lockdown.

But although Autry had the choice to leave because of her U.S. citizenship, she stayed. Her boyfriend, now effectively trapped along with many other Chinese nationals by travel restrictions, would otherwise have had to stay alone in their shared apartment.

"I'm not leaving, even though I can," she told The Washington Post. "It wouldn't be the right thing to do for our relationship, just to leave him."

Their bond has weathered the first storm. But their reality is far from romantic.

As China and governments around the world impose hastily concocted quarantines, travel bans and evacuations, mixed-nationality couples and families looking to leave China have found themselves divided by citizenship status. Frustration and anxiety is running high as people struggle to navigate emergency measures meant to contain the virus, but which critics say have stoked xenophobia and public panic.

Monte Gisborne, a Canadian citizen whose wife and stepchild are visiting relatives in the Chinese city of Wuhan, the epicenter of the epidemic, had hoped that they would get seats on a plane evacuating Canadians. He said Canada excluded his wife and child because they are Canadian permanent residents, not citizens. "Aren't we a Canadian family?" he asked.

Getting out of China, no matter one's nationality, is getting harder and harder. Airlines around the world are canceling flights. Countries are imposing bans on people traveling from China. Within the country, movement between and within cities is highly restricted. Chinese regulations and diplomatic relations have further complicated some efforts by governments to evacuate their citizens.

On Jan. 31, the Trump administration issued stringent new travel restrictions, effectively barring entry to any non-U.S. citizens who recently traveled in China and imposing a 14-day quarantine on returning U.S. citizens. Chinese nationals who are spouses or immediate family members of a U.S. citizen are exempt from the ban.

Autry and her boyfriend, Li, who spoke on the condition that only his last name be used to protect his privacy given sensitivities around the virus, had been set to travel to Hong Kong to get engaged. The couple met while she was studying in China. Two years later, "he's part of my family," she said.

Then the virus hit. Autry first heard about it from the U.S. media and Reddit, she said, while news from China was censored. The two decided to proactively self-quarantine and began limiting trips outside their apartment. After a few weeks, officials formally banned any unnecessary travel.

These days, the guards at Autry's apartment complex take her temperature before and after she steps out for a moment to pick up delivered groceries, she said. Inside, life is fairly boring: Li works remotely, she studies Chinese and they play video games. But at least they're together.

"I can't imagine being alone in this kind of situation," she said. "(Leaving), it's not something I would even consider."

Others have been separated, though not by choice.

Gisborne's wife, Daniela Luo, and their daughter, 9-year-old Dominica, were visiting Luo's family in Wuhan when the quarantine took effect. Gisborne had not joined the trip.

"If there is a reason for the criteria, it has not been made clear to us," Gisborne said. "I really need clear information from my government."

Gisborne is gripped by fear and anxiety about what his daughter and wife have to endure. "Who would not be afraid for their family and try and do whatever they can?" he said.

Countless families have faced a maddening array of international barriers.

Kai Huang, a Canadian citizen, had to decide whether to leave Wuhan or stay with his 78-year-old mother, a permanent Canadian resident not allowed on the Canadian flight, he told the Canadian Broadcasting Corp. Two weeks ago, British authorities first told Natalie Francis, a British citizen working in Wuhan, that her 3-year-old son, Jamie, who is a dual British-Chinese citizen, would not be allowed to leave on the flight with her because of his Chinese citizenship.

"It really wasn't up until the very last minute that she got some assurance there was a strong possibility her and Jamie would be allowed on the flight," Francis's aunt, Michele Carlisle, told the BBC.

Back in China, Autry said her boyfriend's family doesn't trust reports from the Chinese government. They are also extremely distrustful of the United States, which Chinese media and officials have accused of using the outbreak to weaken China. It's uncomfortable, she said, but it hasn't had an effect on their relationship.

"They said no, their issues are with the American government and not with me," she said.