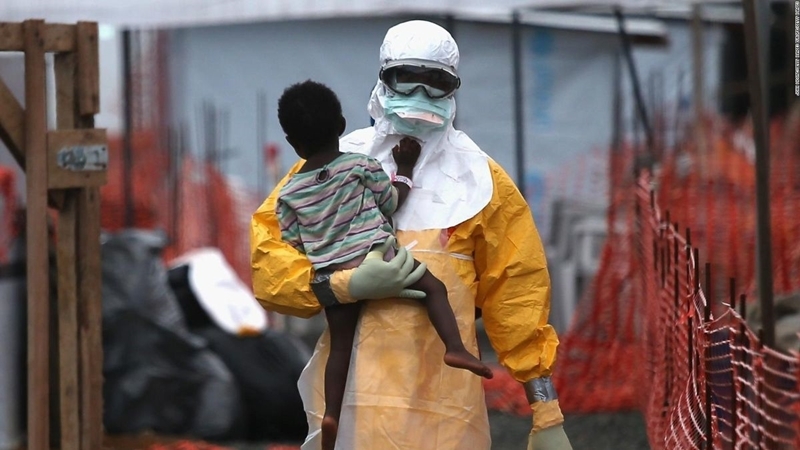 ADDIS ABABA, Ethiopia - The second-biggest Ebola outbreak in history, which has upended life in eastern Congo's North Kivu and Ituri provinces since August 2018, infecting nearly 3,500 people and killing about 2,250, is down to its last chain of transmission.

Despite ongoing violence that has hampered the response from its outset, and that has spiked again recently, new cases have dwindled. At its height last May, hundreds were contracting the disease every week.

The waning of the Ebola outbreak comes as a new one captures global attention - and potentially funding, too. Global health officials have warned that while the novel coronavirus, now known as covid-19, racks up thousands of new cases a day, the hard work of ending the Ebola outbreak and preventing another is far from over.

"Funding needs [for the Ebola response] have not as yet been fully met, and currently there is a risk there will not be funding for WHO activities beyond February," said Margaret Harris, a World Health Organization spokeswoman.

On Wednesday, an independent committee that advises the WHO unanimously agreed that the Ebola outbreak "still constitutes a public health emergency of international concern" - a designation that was recently extended to the covid-19 outbreak.

Ebola and covid-19 are vastly different viruses; Ebola can be transmitted only through exchange of bodily fluids, but it killed nearly 70 percent of those who contracted it in eastern Congo.

The WHO's director general, Tedros Adhanom Ghebreyesus, said Thursday that covid-19 "might have adverse consequences for the [Ebola] response efforts through diminishing focus" on it.

While the WHO, the U.S. Centers for Disease Control and Prevention, a constellation of nonprofits and the Congolese Health Ministry have mounted a relentless campaign to contain Ebola, little has been done to shore up the region's health system, which is sorely lacking in even the most basic infrastructure. Ebola is endemic to Congo's rainforest, and the likelihood of future outbreaks is high.

"Only half of health facilities have access to water," said Tedros. "Strengthening a health system may not be as sexy as responding to an outbreak, but it is equally important."

Almost all of this month's cases have been reported in the restive city of Beni, which has also been besieged by an Islamist militia that calls itself the Allied Democratic Forces, or ADF.

In late October, the Congolese military launched an offensive against the ADF, complicating the Ebola response and sparking a wave of retaliatory attacks that have killed hundreds of civilians. The offensive has been lauded by Congo's president, Félix Tshisekedi, as nearly flushing the group out of Beni and the surrounding region, but a resurgence of ADF attacks in February has cast doubt on those claims.

Harris, the WHO spokeswoman, said that while officials were confident in asserting that only one chain of Ebola transmission remains, ongoing violence has made it impossible to reach some areas that have had cases over the past few months.

"Given the lack of access in some areas like Lwemba, it's possible that there are other areas where there could be cases that we are not aware of, but it's unlikely," she said.

With the end of the outbreak in sight, some of the response's protocols have shifted as resources have been freed up from emergency activities. Now, patients can be afforded a greater degree of comfort, instead of being confined to Ebola treatment centers where the dead and dying were present.

"Everyone who has been in contact with someone confirmed to have Ebola is now offered the option of voluntary isolation - meaning that if they would like, they can be accommodated in a guesthouse where they are provided with food and health support - so that they can be monitored as closely as possible, and if they develop symptoms they can be brought to care as quickly as possible," Harris said. "Most people are taking up this offer."

In addition to a shortfall of investments in eastern Congo's health infrastructure, a large funding gap exists for an ongoing measles outbreak in the same region that has killed 6,300 people in far less time than Ebola.

Peace is also unlikely to return soon to the region, known as the Great Lakes for its defining geographical feature, as competition over minerals heats up between the Congolese, Ugandan, Rwandan and Burundian governments and local militias aligned with them.

"The Great Lakes region is increasingly on edge. Distrust is rife among Burundi, Rwanda and Uganda, all of which have connections to insurgents in eastern Congo," said a recent report by the International Crisis Group. Plans by Congo's Tshisekedi to invite armies from those countries to help defeat the ADF and other groups heightens the chances for an intensification of conflict.

"Were Burundian, Rwandan and Ugandan forces given a green light" to operate in Congo, the report said, "the danger would be all the graver, raising the specter of an interlocking proxy war wherein each Great Lakes country is backing its rivals' enemies."