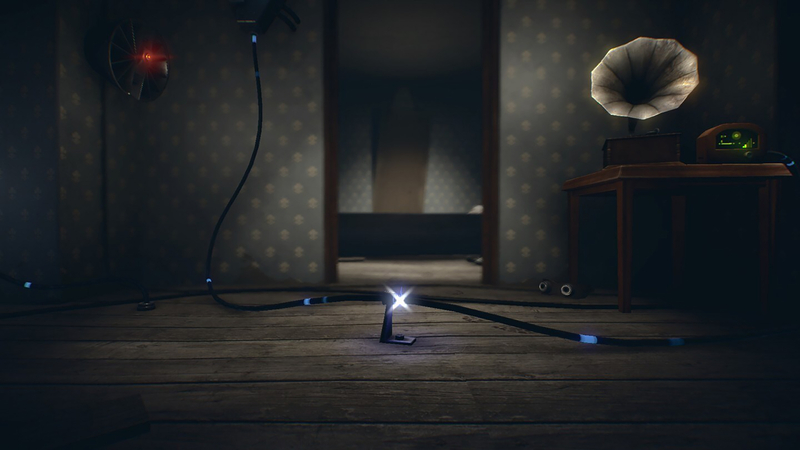 By Special To The Washington Post · Christopher Byrd · ENTERTAINMENT

Sergey Noskov's "7th Sector" is an inspired sci-fi game that draws on the visual vocabulary of the 1980s. Neon skies, rabbit-eared televisions and moody synth music all play into its analogue vision of the future. Although it has its stealth and action moments, at its heart "7th Sector" is a challenging puzzle game that will occasionally tap into your math or logic skills, or, if you're like me, send you scurrying to the internet for answers. The game's atmospheric quality, which evokes themes of confinement and the struggle for liberation, is reminiscent of the work of Playdead, the Danish development studio whose "Inside" (2016) sets the standard for dark cinematic sidescrollers.

"7th Sector" opens with a scene that recalls the haunted television in Steven Spielberg's "Poltergeist." On a fuzzy CRT television an indistinct figure materializes. Using the thumbstick on the controller, you can guide it to either side where it will push against the edge as though at the door of a cage. Then, with the press of a button, the phantom on the screen transforms into a spark that can pass through the cables attached to the television.

From there you can hop between other cables snaked along the ground or attached to different surfaces, as well as into transistor boxes and other electronic sources. Over the length of the adventure, the backstory of which is told in collectibles spread throughout the environment, you'll hijack everything from the power amp on a record player to a child's RC car, to domestic and killer robots and other forms of machinery.

Traveling as a spark along cables reminded me of the opening shots of Krzysztof Kieślowski's "Red." I've never seen a game adopt such a novel point of view, so I was captivated by "7th Sector" from the beginning. Given that science fiction has long been an overly represented genre in video games, surprises are rare, and I considered this no small feat. That said, a couple of puzzles stopped me in my tracks and would have seriously derailed, if not outright halted, my progress if I hadn't consulted an online walk-through.

I wouldn't have even known where to begin with a puzzle that required calculating the amount of free space available in a few containment cells if I hadn't realized I hit a bug that made an environmental clue appear on screen in Russian. (Resetting the language option in the menus immediately fixed the problem.) I encountered another bug after working through the correct solution to a simple cart puzzle that was remedied by reloading the chapter.

Although I took issue with the fiddliness of a couple of the other puzzles such as one in a chapter appropriately titled "Physics," where you must ferry highly insecure cargo on the back of a flying drone, I was, on the whole, impressed with the range of puzzles and different gameplay scenarios available here - especially when you consider that "7th Sector was designed by a single individual.

Sergey Noskov is one to watch.