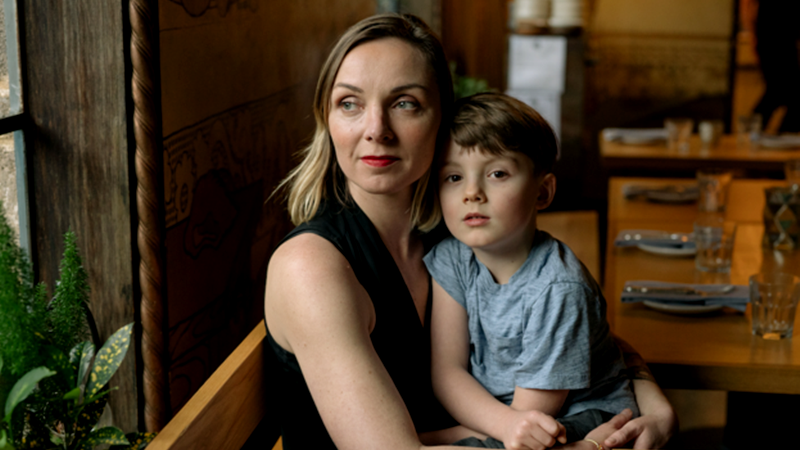 Parents should help their children envision a future that is happy and safe, climate scientist Sarah Myhre says - but to do that, they must first process their own sense of fear and loss. MUST CREDIT: Photo by Jovelle Tamayo for The Washington Post

n the midst of a winter that hasn't felt much like one, as the coldest temperatures retreated to the highest latitudes, Jedediah Britton-Purdy carried his 5-month-old son, James, outside their home in New York City to bask in the unseasonable warmth.

As a professor of environmental law at Columbia University, Britton-Purdy was acutely aware of the ominous implications of the city's record highs. As a new father, what was there to do but revel in his child's first true sense of springtime?

"These are the first beautiful days he is feeling: We walk out in the warm sun, we laugh together, we look at a tree," Britton-Purdy says. "Yet the experience is infused with all of this harm, all of this damage that has made this beautiful, beautiful day that I'm having with him." He sighs. "We really haven't figured out, he and I, what to do with that yet."

What to do with that - a world that is breaking down, and a child who is growing up? Parents are meant to be guardians and guides, the ones to help their offspring make sense of the present and envision a future. Philosophically, and practically, this is a daunting task in the best of times - and these are not the best of times, particularly if one happens to be a climate scientist, or an environmental justice activist, or anyone whose profession demands a constant, clear-eyed acknowledgment of the damage wrought by the climate crisis.

But this clarity can also be a gift, one that forces a sincere engagement with the problem. When Britton-Purdy became a father, his perception of the world and the threats against it shifted; the crisis, he says, took on a new immediacy.

"My own temperament is that I've always been able to go on, even with a sense of loss, and have kind of a cheerful attitude toward the future as a practical matter," he says. "But now that I feel personally and intimately anchored in the future in a different way, I feel a different kind of fear. The fear is right up against my heart in a way that makes it harder to think about what comes next."

After the birth of her son four years ago, climate scientist Kate Marvel experienced what she calls "a very profound revelation." Marvel's work for NASA and Columbia University involves projecting the future - not predicting, she emphasizes, but presenting possibilities of what could happen. Those projections once felt abstract. "But then I'm realizing, 'Oh my God, somebody I love is going to be 35 in 2050,' " she says. "And that was just a very visceral thing for me."

One day last year, Marvel and her son stepped aboard the shuttle that runs between Grand Central Terminal and Times Square in New York City, and found themselves surrounded by a brilliant, bustling coral reef; the subway car was wrapped in an ad for David Attenborough's "Our Planet" series. Her little boy was awestruck.

"And I remember thinking, suddenly: This may be the closest thing he ever sees to an actual coral reef," she says. "I felt a jolt at that."

But Marvel does not dwell on those sorts of thoughts, and when people ask her, as they often do, whether she is filled with existential dread as a climate scientist and a mother, she tells them emphatically that she is not. Her work has taught her that what matters is what we do right now, and the urgency of that edict leaves no room, no time for despondence.

"I think, when a lot of people talk about climate change and having kids, they're looking to the future and despairing," she says. "For me, it makes me look at the present and be incredibly resolved."

In the face of potential climate catastrophe, some have questioned whether it's moral to become a parent - is such a burden fair to the broken planet, or to the child who would inherit it? But Sarah Myhre, a climate scientist in Seattle and the mother of a 6-year-old son, rejects this line of thinking. You can't save humanity by abandoning it, she says, and these sorts of messages are harmful to the children who are already here.

"Kids are listening to that, and what they hear is that their presence in this world is a violation of the world itself," she says. "It's really important to let kids know that they were born into a changing world, that they did not betray the world by being born, and that they are born into a time where they can do profound good and have really transcendent, powerful impacts on the world."

That is what she'll tell her son, when he's old enough to ask about his future; for now, Myhre is focused on helping her son become the strongest, kindest person he can be.

"I believe that the through line for us, as communities, as individuals, is the humanity that we bring to solving problems," she says. "Our ethic of care, our empathy, our stewardship of one another. And so I think that stewarding that particular aspect of my son's internal life is really important to me, so that he is coming to the world with a robust, empathetic, integrated sense of self."

This means that her family prioritizes quality time together, she says. "I have made a large pivot in my life, as a parent, toward the cultivation of joy on a daily basis," she says. "It's easy to say and a lot harder to do - because joy requires us to be vulnerable, it requires us to be in the moment."

Joy is what Britton-Purdy wants for his son, too, and so he will pause on a walk to place the infant's fingers against the knobby bark of a tree, and someday he will show his child how to use a knot of twigs to dam the flow of creekwater, the way he once did as a young boy on the farm in West Virginia where his family still lives. He will teach James to marvel at nature wherever he can find it.

"I want James to have an intimate foreground of experience that is really connected with the life of things, and the amazing wonder of living things, and not have his first thought be that it's all going away," Britton-Purdy says.

And when it is time to talk about what is going away, he will remind his son that things have always been going away, that the natural world has been inexorably altered by humanity for centuries. Britton-Purdy wants James to knows this: that beauty and change and loss have always coexisted.

"We have to not exaggerate or distort what it was like, or the nature of what's being lost," he says, "or else we will fall into a nostalgia for a world that never was."

There is resilience to be found in an honest accounting of our past, says Heather McTeer Toney, a former regional Environmental Protection Agency administrator and national field director for Moms Clean Air Force. As an environmental justice activist and African American woman, she wants to instill the perseverance and perspective of her ancestors in her 3-year-old son and 14-year-old daughter: "We've had no choice other than to figure out how we're going to adapt and live," she says. "This is not new to us."

Sometimes, after her children have gone to bed, she and her husband talk about where they should take the kids, the places they should see quickly, before they are irreparably changed. But when she speaks to her children about what lies ahead, there is no lingering in sorrow; she is determined that they will thrive.

"My entire ancestral line is built on, 'You have to figure out how to make it work, how to survive, because no one is going to help you,' " she says. "I do not want my children operating in fear. I do not want them operating in a mind-set that all hope is lost. That is not my mind-set."

A rash of violent storms recently swept through their town in Mississippi, and when the house lost power, Toney saw her teenager immediately reach for a flashlight and her smartphone. The storms, Toney says, have become more frequent lately, more severe, and she knows this pattern will worsen in the years ahead. She watched her daughter cradling her phone and thought of what would happen when, eventually, the battery died.

Toney's response was pragmatic: She would show her daughter where the candles were kept, and teach her to make her own light.

How do we tell our children stories about the lives they might live, and the planet they will live on, with an ending that is still filled with possibility?

"It is true that everything is going to have to change, and it's going to change one way or another - either because we're undergoing profound climatic shifts, or because we're going to have to change the way we get energy and the way we run society," Kate Marvel says. "Especially for young people who have these amazing imaginations, that gives them space to dream. And I think right now we're really just focusing on the nightmares."

Parents must help their children imagine a future that is happy and safe, Sarah Myhre agrees - but to do that, they must first process their own sense of fear and loss. "If parents can't transcend and make sense out of their feelings, and derive action and meaning from their feelings, then they are stuck," she says, "and they are going to transpose that stuckness, that anxiety, onto their children."

This has always been the work of parenting, all the more essential now in extraordinary times: to hold a steady balance between grief and gratitude, to find a way to move with purpose through a world that brims with both beauty and heartbreak.

Myhre feels this tension most in the North Cascades, where the snowline is receding steadily up the mountainsides - where, in recent years, the ski resorts she grew up frequenting have sometimes opened late and closed early. Throughout her formative years, there was nowhere that brought Myhre greater joy, and it has become her son's favorite place, too. But someday in his adulthood, she knows, he won't be able to ski on those slopes anymore.

"There is this finite and precious window that he's in right now," she says, "and it's going to shut."

This winter, Myhre has taken her child to the mountains every chance she gets. With each visit, his movements become more self-assured, more confident, more ecstatic. She follows through the snow, watching her son and his world transforming.