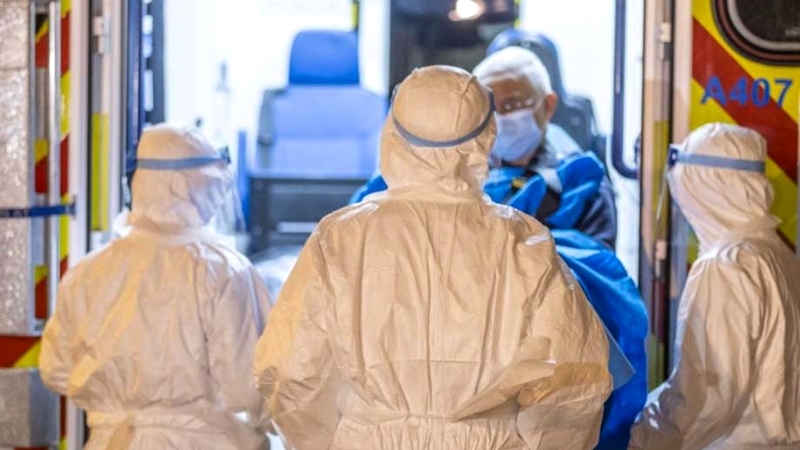 More than 1,700 Chinese medical workers have contracted the covid-19 respiratory disease, officials said Friday, a sobering development that came on the same day the virus turned up in Africa and Japanese officials said they would allow some uninfected travelers to leave a cruise ship hard-hit by the outbreak.

At the same time, officials noted the infection rate among health care workers is in line with that of previous respiratory viruses, including the 2003 SARS outbreak. The total appeared to be a count of infections that have occurred over many weeks, rather than a sudden escalation of the crisis.

"This isn't surprising, if I'm being honest," said Saskia Popescu, senior infection prevention epidemiologist for Honor Health, a hospital system in Phoenix. "It is very, very easy to have failures in infection control."

Michael Ryan, executive director of the World Health Organization's Health Emergencies Program, said he believes the cases peaked in the third and fourth week of January and have declined since because of improved training and awareness.

"It's a lower percentage than has occurred in other coronavirus outbreaks," Ryan said. "Now that's not a guarantee that it won't change."

A total of 1,716 Chinese medical providers were infected as of Feb. 11, 3.8 percent of the confirmed cases, Chinese health authorities said. Six have died. One health care worker in Singapore also was infected.

The Feb. 7 death of Li Wenliang, an ophthalmologist at Wuhan Central Hospital who had warned fellow medical school graduates in a private chat of an outbreak of the virus, prompted a national outpouring of grief and rage toward authorities. He died after being detained and released by police for speaking out.

By acknowledging the toll on health professionals, Beijing is trying to signal some transparency on a flash point issue, and letting ordinary people know officials share their sense of alarm.

"It might raise a red flag about how serious the situation is," said Yanzhong Huang, a senior fellow for global health at the Council on Foreign Relations. "And hopefully that leads to a more effective government response."

But Huang cautioned against seeing the figure as the final word on medical workers. "If it is coming from an official source, we have to take it always with a grain of salt," he said.

Concerns about how medical personnel are faring in this crisis have been front and center from the start. Photos and video from Wuhan have shown exhausted doctors and nurses working in overflowing hospitals.

Still the toll on front line workers appears to be smaller than it was in other lethal coronavirus outbreaks. When SARS emerged in 2002, health care workers accounted for a fifth of the cases. A study of MERS infections from 2012 to 2018 found that health care workers made up a similar share - 415 of the 2,223 confirmed cases.

"Patients need to be wearing a mask. Physicians taking care of them need to be protected themselves - not only medical doctors or nurses, but people who work in the hospitals: the transporters, the person who is at the front desk. All these individuals are at risk," said Charles Dela Cruz, a pulmonary and critical care physician at Yale University School of Medicine.

To date, covid-19, the disease caused by the new coronavirus, has caused more than 1,500 deaths, all but two in China, and 66,000 illnesses, with only 600 of those outside China. The United States has seen 15 cases and no fatalities.

Egypt's Ministry of Health confirmed Friday that it had detected a case of coronavirus, the first known example of the outbreak in Africa. Health officials have worried about the virus reaching the continent because of its weak health care systems.

A spokesperson for the ministry, Khaled Megahed, said in a statement that a foreign national had tested positive for the coronavirus and the WHO had been notified.

Although the person had not shown symptoms, they were tested because of their travel history. The person was subsequently transported to a hospital and they are in stable condition under quarantine.

A number of people who came into contact with the patient have been tested for the virus, Megahad said. All tested negative, but they will be placed under 14-day quarantine as a precaution.

In Japan, meanwhile, the Health Ministry said Friday that 10 people evacuated from the quarantined Diamond Princess cruise ship in the port of Yokohama are in serious condition, with eight confirmed to have the new coronavirus. One of the other two is still awaiting test results.

Amid persistent criticism of its approach, the government said it would begin allowing some people who have tested negative for the virus to leave the ship and finish their quarantines on shore. Priority will be given to passengers over the age of 80 and those with existing medical problems, as well as people in windowless cabins, Health Minister Katsunobu Kato said.

So far, 218 people aboard the ship have tested positive for the virus out of 713 who were assessed. The government says it plans to step up testing in a bid to examine everyone on board before the quarantine ends Feb. 19.

A quarantine officer involved in screening passengers also fell sick. The health ministry said he did not follow proper procedures, wiping away sweat with his gloves and reusing a mask he had worn earlier, Japan's national television network, NHK, reported.

The U. S. Centers for Disease Control and Prevention, moving forward with its plan to boost disease surveillance, named the five cities where labs will begin testing flu specimens for the coronavirus. They are Chicago, Los Angeles, New York, San Francisco and Seattle.

The public health labs are part of CDC's existing flu surveillance network, which monitors seasonal influenza and hospitalizations. Specimens that are negative for flu will be tested for coronavirus, the CDC's Nancy Messonnier said. Testing will be expanded to additional labs in coming weeks.

Lab tests that confirm additional coronavirus cases could allow public health authorities to take actions to forestall outbreaks, such as canceling large gatherings or calling for telemedicine and telework.

At the same time, flu illnesses have risen sharply in recent weeks, Messonnier said, complicating efforts to determine whether an illness is caused by the new coronavirus or the flu virus. So far this season, at least 26 million people in the U.S. have contracted the flu, including 14,000 who died and 250,000 who were hospitalized.