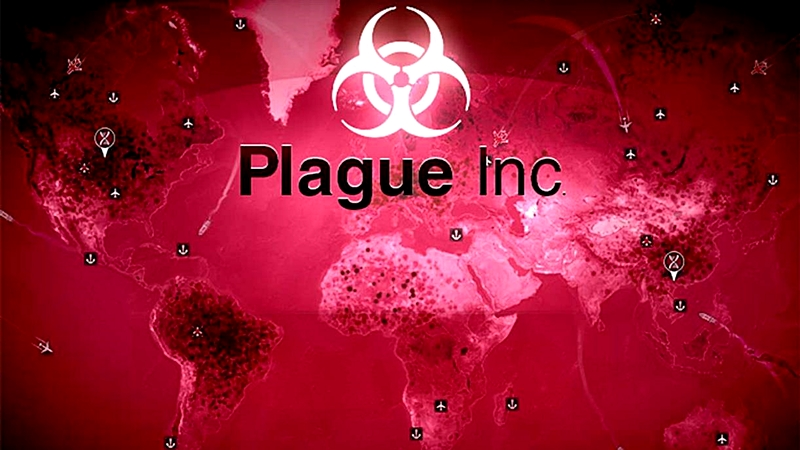 The popularity of games centered on the proliferation of pathogens has surged in recent weeks. As officials and experts worked to stem the global spread of the novel coronavirus that originated in Wuhan, China, and has left nearly 1,500 people dead, gamers have turned their attention to parallel, imaginary struggles.

Foremost among them: Plague Inc., a strategy game that rose to the top of Apple Store charts in China, the United States, and elsewhere as coronavirus fears mounted. First released by U.K.-based studio Ndemic Creations in 2012, the game, of which there are a handful of variants, asks players to take the part of a pathogen, helping it evolve to wipe out humanity.

The popularity of such games makes sense amid efforts to cope with the coronavirus and the fears it has sown, researchers and game developers said.

"Games are a type of cultural expression - they're part of how we make sense of the world," said Carly A. Kocurek, a cultural historian at the Illinois Institute of Technology. "For some people, horror films are a way to deal with anxiety, and games can be, too."

Outbreak-themed video games have existed for decades. One of the earliest examples, according to Marco Accordi Rickards, the founder and head of the first Italian museum of video games, was Agent USA. Released in 1984, the game centers on the spread of a plague that robs people of their will.

The concept has remained popular, and Plague Inc. has been around long enough to see surges in interest during previous crises, including the 2014-2016 Ebola outbreak in West Africa.

The game's creators were quick to preempt the notion that they might be capitalizing on the coronavirus epidemic. In a statement last month, the company said that it had "received a lot of questions" on the coronavirus and that interest in the game tends to rise whenever a major outbreak occurs.

"We specifically designed the game to be realistic and informative, while not sensationalizing serious real-world issues," the company said. It did not respond to a request from The Washington Post for comment.

The game's long shelf life is unusual, industry observers said. "Plague, Inc. is a rare phenomenon in that its success entirely hinges on a topic recurrently returning to relevance," said Andrea Minini Saldini, the publishing director at the Italy-based branch of IGN, a video game site.

Among the key questions Ndemic Creations and other developers face is whether popular games such as Plague Inc. add to players' understanding of epidemics or have a muddling effect.

Ndemic Creations has characterized its game as "realistic" but urges players to "get their information [on the coronavirus] directly from local and global health authorities." On the game's official Facebook page, some players said they considered the simulation essential to their understanding of the coronavirus outbreak.

"(The) first time I heard about [the virus], I instantly thought about this game," wrote player Izzie Loo Yu, who said she lives in Hong Kong. In the game, a treatment for the spreading disease is usually found, she added.

Pina Lalli, a professor of cultural sociology at the University of Bologna, said the experience of assuming the role of a pathogen while fighting against researchers who try to develop a vaccine or treatment was "not just escapism."

"Instead of being paralyzed by fear while recognizing your powerlessness, this allows you to cope and feel that there is something you can do," Lalli said.

Some pathogen-centered games may have sought to back away from the coronavirus connection.

An online version of Pandemic, a popular board game in which players collaborate to defeat viruses as they spread from city to city, was set to be available free on the Epic Games Store in late February. That promotion has been delayed.

Pandemic was a surprise hit when it came out in 2008. Several expansions have been released.

Disease is a "perfect opponent: It's fairly easy to model in a game, uncaring and scary," said Matthew Leacock, who created the game.

"I never set out to make it an educational experience," he said. "I think the best lessons it teaches are those related to cooperation and communication under pressure."

At least one university has relied on Pandemic to teach students strategies for medical teamwork, Leacock said.

"It engages you while it teaches you," said Ali S. Khan, a former senior official at the Centers for Disease Control and Prevention, who hosted James Vaughan, the game's creator, for a visit to the CDC in 2013. "The game is based on a solid mathematical model of how (a pathogen) spreads in a community. A simplistic (one), but no fantasy."

"When you play it, you do realize it's a game."

Audra M. Swarthout, an associate professor of biology at Delta College in Michigan, has been using Plague Inc. for around six years with her students.

The game, she said, "is actually one (of)my favorite classroom assignments."

Nonetheless, she cautioned, "the evolution of the diseases in the game is not realistic and provides an extremely distorted view of what really occurs in a pandemic."

Swarthout usually asks her students to analyze the degree to which the game is faithful to scientific truth - something common players may not be equipped to do.

Plague Inc. and Pandemic may have a certain morbid appeal in the time of the coronavirus. But they have more than that to offer, many experts and players agree.

"I can certainly understand the hesitation around this - no one wants to trivialize the very real human suffering that this coronavirus has brought with it," said Leacock, Pandemic's creator. "But the reality is that playing helps us process the world around us, and people may be turning to these games now for that reason."