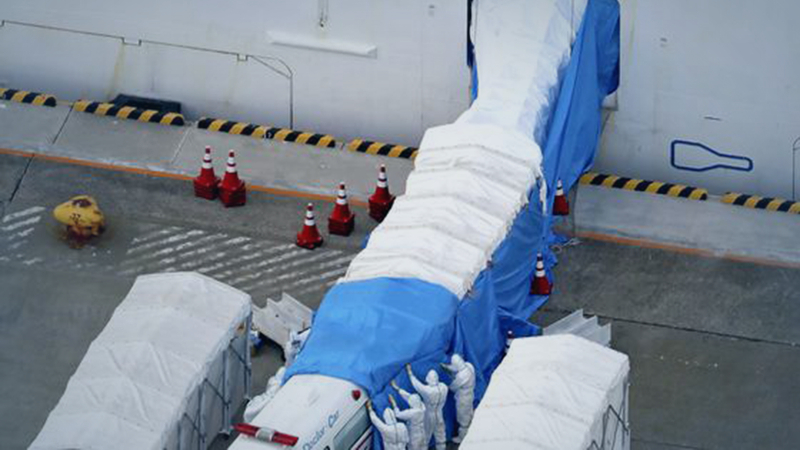 File Photo of Diamond Princess, a cruise ship carrying 2,666 passengers and 1,045 crew members that had been quarantined for two weeks off the Japanese port of Yokohama. Credit :Syndication Washington Post

BEIJING - Fourteen Americans who tested positive for coronavirus were among the hundreds of U.S. citizens evacuated from a cruise ship off Japan to U.S. facilities over the holiday weekend, the result of a chaotic chain of events that put virus-stricken passengers on flights with other evacuees.

The 14 U.S. passengers tested positive for the virus after leaving the Diamond Princess, a cruise ship carrying 2,666 passengers and 1,045 crew members that had been quarantined for two weeks off the Japanese port of Yokohama.

But by the time their test results arrived, they were on a fleet of buses that took 328 asymptomatic passengers from the ship to two charter planes bound for U.S. military bases in Texas and California, according to a senior U.S. official who spoke on the condition of anonymity to speak freely about the incident.

It was a wrench in a coordinated effort. While the buses sat on the tarmac, health experts considered whether to put the 14 on the flight or divert them to hospitals in Japan, the official said. The State Department had already told passengers that virus-infected people would not board flights.

The planes included a sealed-off section of 18 seats in the back, and part of the plan was to isolate passengers there if they developed symptoms midflight, the official said.

Health authorities deemed them "fit to fly" because they were not showing symptoms, the State Department and the Department of Health and Human Services said in a statement Monday. They were cordoned off from the other passengers during the flight, the statement said.

"These individuals were moved in the most expeditious and safe manner to a specialized containment area on the evacuation aircraft to isolate them in accordance with standard protocols," according to the statement.

It was unclear whether the other passengers were informed, the official said. The State Department did not respond immediately to a request for comment.

Another 44 Americans from the cruise ship tested positive for the coronavirus Sunday and had been taken to hospitals in Japan.

All are due to go into quarantine for 14 days, the maximum incubation period for the virus. Ten passengers who tested positive were moved to a hospital in Omaha, Nebraska, upon arrival, where they are being quarantined, retested and monitored in rooms with separate filtration systems at the University of Nebraska Medical Center. Four others with the virus are in a hospital outside Travis Air Force Base and will be moved to Omaha this week, the official said.

Japan's Health Ministry on Monday reported 99 new cases of coronavirus among the passengers and crew of the Diamond Princess, increasing the total number of infections from the ship to 454, including the Americans. Of those, 18 are in serious condition, the Yomiuri newspaper reported.

Yosuke Kita, a senior official in the Japanese Health Ministry, said the government would finish testing everyone aboard the Diamond Princess by the end of the day Monday. One of the new cases was a Russian woman, the Russian Embassy in Tokyo said on Twitter, and two were Australians, according to the Australian Broadcasting Corporation.

In addition to the cases on the Diamond Princess, Japan reported a sharp rise in the number of people with coronavirus over the weekend, with 65 people confirmed to have the virus, up from 33 on Thursday. The fact that many of the latest cases cannot be traced directly to China led Health Minister Katsunobu Kato to acknowledge that the virus had entered a "new phase" of local transmission.

The country is shifting to an approach focused on community-based control and treatment, said Shigeru Omi, chief director with the Japan Community Health Care Organization, which runs medical centers across Japan.

Kato said Japan can now administer more than 3,000 tests a day, and designated hospitals will be able to take 1,800 of the most severe cases, "and citizens with very light symptoms will be requested to stay home," Omi said. People who develop symptoms will be encouraged to contact special call centers, rather than visit hospitals on their own.

Omi said that the "goal of this strategy is to slow the speed of transmission and reduce mortality" - a de facto acknowledgment that it has now become impossible to prevent the virus from spreading further in Japan.

The World Health Organization said new data has yielded better understanding of how the virus circulates and shows a decline in new cases, WHO Director General Tedros Adhanom Ghebreyesus said in a news conference Monday. But he cautioned against that as a sign the virus has reached its apex.

"Trends can change as new populations are affected. It's too early to tell if this reported decline will continue," he said. "Every scenario is still on the table."

Government officials in Malaysia, Cambodia and the United States were scrambling on Monday to track down passengers from another cruise ship - the Westerdam, owned by Holland America Line - who may have been exposed to coronavirus.

Hundreds of passengers have flown home, mostly through Thailand or Malaysia, after the ship docked in the Cambodian port of Sihanoukville and health authorities there deemed it coronavirus-free.

But an 83-year-old American woman who disembarked from the ship at Sihanoukville on Friday took a charter flight to Kuala Lumpur, the capital of Malaysia, along with 145 other passengers. They had all passed health checks by Cambodian authorities and cleared to leave the ship and travel onward.

When the woman arrived in Kuala Lumpur, she reported not feeling well and tested positive for the virus. Malaysian authorities say she is in stable condition.

Her traveling companion tested negative, and none of the other passengers or crew members reported symptoms, Holland America Line said in the statement.

The Westerdam on Monday remained in Sihanoukville, where it had docked last week after spending two weeks at sea. Authorities in Japan, Taiwan, Guam, the Philippines and Thailand had turned it away after seeing what happened with the Diamond Princess, where the number of infections grew rapidly even while the vessel and its passengers quarantined.

The new cases come amid a continuing scramble to contain the virus in China, especially in Wuhan, the capital of Hubei province, where the outbreak began.

China's National Health Commission said over the weekend that the number of new cases outside Hubei province has declined, as authorities impose severe restrictions on people's movements in an attempt to stop transmission.

In Beijing, China's ruling Communist Party signaled that it would almost certainly postpone the annual meeting of its legislature, the National People's Congress and the other national committee of the Chinese People's Political Consultative Conference. Together, these meetings are known as the "Two Sessions."

The move to delay it "underscores the gravity of the coronavirus epidemic," according to the analysts at the NPC Observer blog. "Officially, the Council is reported to have been mainly concerned with pulling NPC delegates (over a third of whom are local officials) away from their epidemic control efforts," the analysts said in a blog post, linking to a state media article.

Other analysts point out that it would be bad optics for the party to hold a huge meeting when all public gatherings are banned, and even worse to show thousands of cadres in masks. The party's leaders already have faced criticism for their response to the outbreak.