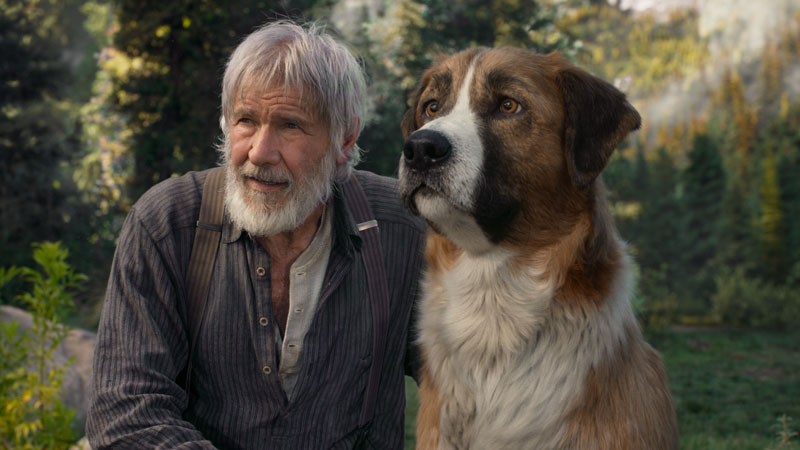 Harrison Ford plays a prospector with a soft spot for a dog in "The Call of the Wild." MUST CREDIT: Twentieth Century Fox

By Special To The Washington Post · Mark Lieberman · ENTERTAINMENT, FILM

It's easy to view "The Call of the Wild" cynically: There goes Hollywood again, sanding the edges off a beloved novel - this time about the human-canine bond - to create disposable entertainment.

Harrison Ford, who stars and provides the film's droning narration, probably earned a bigger paycheck than many moviegoers will see in a lifetime. They spent more than $125 million on this, and the special effects that look that sloppy?

There's merit to these complaints. The latest screen adaptation of Jack London's 1903 adventure saga transforms the novel's menacing gold prospector into a cartoon, played by a sniveling Dan Stevens. Ford's voice-over, as fellow prospector John Thornton, is sleep-inducing. And the CGI dogs look ... very computer-generated, especially when the animals appear side by side with people.

But there is no trace of such cynicism in the movie itself. In an age of children's entertainment that's snarky, self-referential and even meta, "The Call of the Wild," adapted by director Chris Sanders and screenwriter Michael Green, stands out for its earnest effort to entertain without commenting on itself or the modern world.

As the movie opens, the Yukon Gold Rush of the 1890s is in full swing. The film's central character, Buck the dog - performed in motion-capture by Terry Notary and digitally rendered later - runs rampant through a small California town, causing all manner of ruckus at the expense of his wealthy owner (Bradley Whitford). Before long, Buck is drafted into service as a sled dog in the snowy north, joining a team pulling husband-and-wife mail carriers (Omar Sy and Cara Gee), who amiably debate Buck's merits, just before he rescues them from peril.

As in the novel, Buck is bound to embrace his animal instincts and find his true purpose in nature. He doesn't look like a real dog, exactly, but Notary lends him an impressive array of vivid emotions. When he's feeling forlorn or enraged, so are we.

The mail carriers eventually get dispatched to another assignment, and Buck falls in with Stevens's Hal, who arrives suddenly, as if from another, even sillier movie. Hal briefly whisks Buck away - at the expense of his sled dog team's comfort - on a selfish quest to find gold. That is, until John intervenes.

If it seems like Ford's character should have been introduced much earlier in this review, well, that's pretty much how the movie handles him, too. The actor and his robust white beard don't appear on-screen until deep into the movie, when "Wild" abruptly reveals John's backstory: He's living alone and searching for happiness after the death of his young son, by fever, has shattered his marriage. A few chance encounters with Buck leave John with a soft spot for the animal, and together they embark on an adventure that brings them closer.

Sleepy narration aside, Ford's presence enlivens the movie when he finally shows up. More than four decades after charming the world in "Star Wars," the performer has lost a fair amount of buoyancy, but few stars can boast a more infectious smile or a brighter twinkle of the eye. Ford expresses John's grief with enough tenderness that children watching might learn something about how to handle their own emotions.

They'll need those tools for the movie's jarring climax, which, while fairly true to the book, will be nonetheless grim for the youngest viewers. "The Call of the Wild" marks the first foray into live-action features for Sanders, a veteran of animation who produced the similarly earnest "How to Train Your Dragon" series, and directed the first of those films. The final product here leaves plenty to lament, from unconvincing approximations of wintry landscapes to a bumpy narrative that struggles to balance danger and sentimentality.

Then again, there is something about that chemistry between man and dog. Even for cynics, it goes a long way.