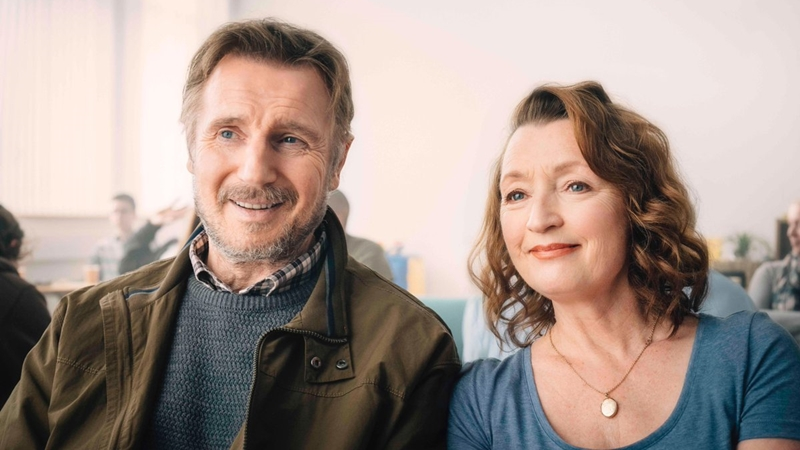 Lesley Manville is one of those actresses from whom it's hard to look away. And the movie "Ordinary Love," which tracks one particularly tough year in the life of a long-married couple, takes full advantage of that fact, to our great benefit.

Liam Neeson, also easy on the eyes, plays the stoic husband, but Manville, as a woman who receives a frightening cancer diagnosis early in the film, demands our attention every second she's on screen, whether scared, smiling, poker-faced or - when chemo makes her hair fall out - getting her head shaved by her attentive, wryly teasing spouse.

Manville plays Joan, and Neeson her husband, Tom, in a moving story that is bookended by two Christmases, taking us through 12 months of medical tests, surgeries, therapeutic treatments and their side effects, and the aftermath. ("Ordinary Love" is not for anyone who, like Tom, hates hospitals. Interestingly, the film - which was shot in Belfast, where the United Kingdom's National Health Service provides most services free - never mentions cost once.)

But this is no medical drama.

As much focus as the film devotes to clinical procedures, even more of it is directed at relationships. In addition to Tom and Joan's marriage, which has the warm if slightly itchy feel of a pair of well-worn wool socks, the film also looks at Joan's friendship with a fellow cancer patient (David Wilmot), who used to teach their late daughter.

That loss - mentioned only obliquely and without specifics - informs Tom and Joan's unusually close bond, as well as offering the opportunity for a slightly contrived scene in which Tom delivers a monologue at his dead daughter's gravesite, while his wife is having tests at the hospital. To be fair, Tom does acknowledge the absurdity of "talking to a bit of stone," as he puts it. And the speech, in which he confesses his own vulnerability, only takes place at Joan's insistence (it's the anniversary of their daughter's birthday).

It does include some heavy conversations, freighted by Tom and Joan's reciprocal fears and insecurities, and we see the toll these stresses take on them in an ugly argument that flares late in the film. Frankly, the fight is necessary from a storytelling standpoint, adding critical texture to a tale that might otherwise be all about the unstinting devotion of a selfless spouse.

But true to its title, "Ordinary Love's" true subject is the mundane, not the melodramatic.

Much of the film centers on quotidian routine: meals; shopping for groceries; the daily walks that Tom and Joan take; their bickering about traffic and Tom's annoying habits; and, when she gets sick, the domestic adjustments made to accommodate painkillers, nausea and, inevitably, far more major sacrifices.

Despite the serious subject matter, "Ordinary Love" might sound, by one measure, slight. As Humphrey Bogart observed in "Casablanca," "It doesn't take much to see that the problems of three little people don't amount to a hill of beans in this crazy world." But that film was set against the tumultuous backdrop of World War II, and this one, well, is more concerned with how many Brussels sprouts to buy.

The point being: Even when questions of life and death loom large, someone still has to make dinner. That observation doesn't make "Ordinary Love" a major motion picture event. But it does, in its own quiet, wise way, nudge it just a little bit closer to the extraordinary.