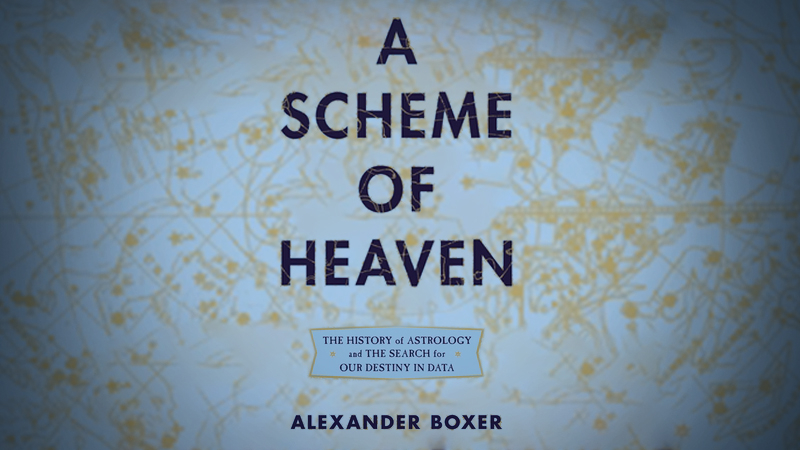 A Scheme of Heaven Photo by: Norton — HANDOUT

As befits a book about astrology, Alexander Boxer's "A Scheme of Heaven: The History of Astrology and the Search for Our Destiny in Data" starts with a horoscope: "Today you find yourself presented with a mysterious opportunity. Take it, even if you're not sure it was really meant for you."

In other words, suspend your skepticism about astrology long enough to hear what this author has to say in his sprightly, if occasionally heavy-going, defense of celestial divination.

Boxer is a data scientist with a Ph.D. in physics, as well as degrees in the history of science and classics. When it comes to astrology, he is surprisingly open-minded, a rare stance for a scientist. In fact, he writes, astrology's status as pseudoscience "makes it all the more delicious to think about."

Astrology combines two powerful human tendencies: First, we are creatures of pattern-matching habit, seeking connections in everything. Second, we possess an irrepressible fascination with self. This combination leads us to find patterns among the stars, imbue these patterns with meaning and then apply this meaning to our own destinies.

Boxer sees in astrology "an undeniable power ... to reveal the surprising ways in which everything, and all of us, are connected to each other across time and space." Point well taken. The notion of time and space is important because with each passing second the position of the stars changes in relation to us, and from the astrologer's perspective where our stars happen to be at any point in time will affect our individual fates.

For centuries, Boxer writes, the fields of astronomy and astrology were so tightly intertwined that neither could be fully untangled from the other. It was astrology, he points out, that became the ancient world's main motivation for improving the accuracy of planetary observations.

Yet over time the fields - and public and professional perceptions of them - diverged. How astrology came to be viewed as belonging in the realm of the superstitious and scientifically ignorant isn't clear, and Boxer doesn't address that evolution. Instead, he views the field of astrology through a thoroughly modern lens, that of today's omnipresent efforts to divine patterns in big data sets. His message is this: If you believe that big data can offer a useful window into the world, do so with the knowledge that others got there first, and very long ago. His implication is a call for humility. To believe anything else is hubris.

Astrology is composed of a few basic pieces: seven planets, 12 signs of the Zodiac and 12 houses of heaven. Together, however, these elements can be combined in an almost infinite number of ways. "The chance that any one celestial configuration will occur is fantastically unlikely," Boxer writes, "and yet the heavens are graced by one of these fantastically unlikely configurations at every instant in time including right now."

Enter the juxtaposition of our 21st-century thinking about big data, which seems new but was already the rage in the ancient world. Astrology, Boxer posits, was that era's "most ambitious applied mathematics problem," made especially intriguing because of the one basic feature that sets astrology apart: its intimate connection with the passage of time. Astrology's deep reliance on time "allows it to mirror the ups and downs of our lives in an eerily convincing way."

Various ancient objects point to humans' early interest in the movement of the sky. Stonehenge, which dates to around 3000 B.C., may have been built to align with sunrise on the summer solstice. The Egyptian pyramids are an early expression of the human regard for the stars. The oldest known personal horoscope, written in Babylon (near modern Baghdad), dates to 410 B.C., Boxer tells us.

One of Boxer's most intriguing examinations is of a piece of history that would have benefited from some astrological forecasting: the assassination of Julius Caesar. It is one of the few pivotal events in ancient history that can be precisely date, time and location-stamped: March 15, 44 B.C., at 12:55 p.m. at roughly the intersection of Via di Torre Argentina and Via dei Barbieri in the Rome of today.

In considering Caesar's death, Boxer gins up a beautifully rendered schematic - or "scheme of heaven," as he calls it - for that fateful blink of an eye. He shows that Venus, the ancestral goddess of the Julian clan, was almost completely obscured, as Jupiter sank mournfully below the western horizon. Bad omens both. But at the time, ancient Romans tended to rely more on signs contained in the flights of birds and the livers of sheep than celestial alignment.

By contrast, one scant generation of Roman emperors later, the importance of astrology had grown so quickly that Augustus had his Zodiac sign, Capricorn, stamped onto silver coins bearing his imperial image. Astrology became a crucial component of that empire's intelligence apparatus and would remain part of the public's consciousness for centuries to come.

Boxer's tone is lighthearted throughout, his writing lean and smart. Yet he doesn't shy away from complexity. As a matter of fact, he serves up plenty of it. As the book moves along, the content grows increasingly matted with data analysis and algorithmic musings that could leave many readers behind. This reviewer, for example, got hopelessly lost in the thicket of Z-codes (Boxer's nickname for calculations used to determine an individual's astrological uniqueness) soon after the author introduced the concept on Page 141. This befuddlement occurred, for Z-code purposes, at 11:46 a.m. on Jan. 21, 2020, in the San Francisco neighborhood of Noe Valley.

But the intellectual heavy lifting shouldn't be a deterrent. There's enough in "A Scheme of Heaven" to satisfy the curious layperson and the data geek alike. The chart of Jupiter-Saturn conjunctions vis-a-vis presidential peril alone is worth the price of this book. And with his lovely prose, Boxer makes it relatively easy to navigate - if not celestially then literarily - around the difficult bits. A journey through Boxer's own scheme of heaven is one well worth taking.