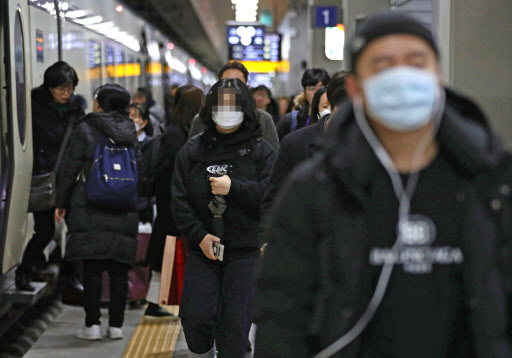 SEOUL, South Korea - When a spokesman for South Korean's ruling party suggested Tuesday that the government would be rolling out a "maximum lockdown" on the coronavirus-hit southern city of Daegu, the backlash was immediate and the political retreat swift.

Hong Ihk-pyo soon clarified that he didn't mean a "Wuhan-style lockdown" or any blockade on travel into and out of the city - along the lines that China's Communist Party has imposed on Wuhan and surrounding areas at the center of the covid-19 outbreak.

President Moon Jae-in soon chimed in, too. There would be no regional blockade, he said, only a full-scale effort to contain the spread of the virus.

The measures include tracing and testing potential carriers, canceling large public gatherings and marshaling the country's medical and financial resources, with help from the police and the military.

But as South Korea struggles to contain a rapid acceleration in coronavirus infections, one thing is clear: the kind of tactics imposed by authoritarian regime in China are simply not on the menu in this compact, democratic and politically outspoken country.

Of South Korea's nearly 1,000 confirmed cases of the new coronavirus, 543 are in Daegu and another 248 in the neighboring province of North Gyeongsang - with a major burst of cases linked to a church with a messianic leader. All but one of the 11 deaths have taken place in the city or province.

"Some kind of travel restriction on Daegu citizens might have been helpful to contain the virus, but it was just out of the question," said Choi Eun-hwa, a professor of medicine at Seoul National University and a member of an expert panel who met Moon on Monday. "The South Korean government can't afford to enforce that kind of restriction as it would spark a huge backlash."

The World Health Organization argues that China's policy of keeping tens of millions of people virtual prisoners in their homes has helped curb the spread of the virus. The rate of new cases has plateaued somewhat in China, but infections are spiking in places including South Korea and Italy.

China's lockdown was also not as effective as it could have been: Wuhan's mayor said 5 million people left the city before it was even imposed.

And many face widespread discrimination in China, with people from Hubei Province, which includes Wuhan, unable to find work, turned away from hotels and even shunned in shops around the country.

"Isolating a community and enhancing surveillance like in Wuhan is undemocratic - and increases the risk of a backfire," said Woo Seoc-kyun of the Association of Physicians for Humanism, adoctors' group in South Korea. "Would Daegu's citizens flee the city, like people evacuated Wuhan ahead of the lockdown?

The mayor of Daegu urged residents last week to stay indoors if possible, but politicians around South Korea have had to be wary of any charge of scapegoating a city of 2.5 million people.

Won Hee-ryong, the governor of the southern island of Jeju, was forced to publicly apologize to Daegu's citizens last weekend after proposing a reduction of flights to the city.

"I am very sorry to have hurt the feelings of Daegu citizens who are facing the worst hardships," Won wrote on Facebook on Saturday, describing a "pressing realization" that "the problem, shared by all the people of South Korea, needs to be overcome with joint efforts."

The South Korean government also apologized on Saturday for hurting the feelings of Daegu citizens after calling the virus "Daegu covid-19" in a news release.

So if blockades aren't on the menu, what is?

Moon traveled to Daegu on Tuesday, visiting its main public hospital, a market and city hall, and pledging that his own prime minister would base himself in the city to lead the fight against the virus. Money would be found to "lessen the socioeconomic damage" in Daegu and the surrounding province of North Gyeongsang, he said.

"If we all gather strength, there's nothing that we can't overcome," Moon told city officials. "The government and all the people of our country are in this together with people of Daegu and North Gyeongsang."

South Korean authorities pledged to test more than 200,000 members of the Shincheonji Church of Jesus, whose followers comprised a major cluster of early cases. Coronavirus tests also will be offered to everyone in Daegu who has cold-like symptoms, an estimated 28,000 people.

Medical experts urged Moon on Monday to shift the country's strategy from containment to mitigation, and to focus on improving the supply of hospital beds.

It is a shift that is already being made in Japan, which has 170 cases outside the Diamond Princess cruise ship and is bracing for a surge in infections.

On Tuesday, the government announced a new policy designed to focus medical care on the most serious cases, while urging people with mild symptoms to treat themselves at home.

"We shouldn't have illusions," said Shigeru Omi, a senior Japanese government adviser. "We can't stop this, but we can try to reduce the speed of expansion and reduce mortality."

Focusing resources on protecting the elderly has to be a real priority for both Japan and South Korea, experts say, given how vulnerable they are to covid-19: a quarter of Japan's citizens are over the age of 65, and 15% of South Korea's.

The coronavirus epidemic is already exposing weaknesses in the health services of the countries it affects.

In Japan, the failure to establish a specialist Center for Disease Control and Prevention has left the health ministry looking out of its depth and overwhelmed, critics say, while there is a shortage of laboratories capable of carrying out coronavirus tests.

The Korea Centers for Disease Control and Prevention has a much greater capability for testing than Japan and can administer around 20,000 tests a day - one possible reason it has found so many cases.

But with public hospitals underfunded for years, the country's health service suffers from a shortage of beds, experts say. At least 142 people with coronavirus in Daegu have already been forced to quarantine themselves at home as a result.

"The Moon government promised to strengthen public health infrastructure, but we still haven't seen a single new public hospital getting built," Woo said. "The cost of taking a capitalistic approach to public health is now overwhelming the entire country."