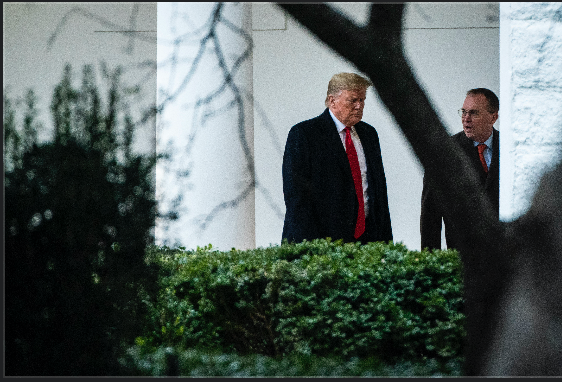 WASHINGTON - Top White House economic adviser Larry Kudlow told The Washington Post late Monday that investors should consider "buying these dips" in the stock market amid the coronavirus panic. The message was to take advantage of one-day slumps and "buy low."

After all, the Dow Jones industrial average had just fallen 1,032 points. President Donald Trump tweeted similar guidance thousands of miles away in India.

Less than 24 hours later, the Dow Jones industrial average would fall another 879 points, bringing Trump and Kudlow's economic advice - at least in the short term - under greater scrutiny.

The rosy sheen that Trump, Kudlow, and other White House officials have tried to express about the economic impact of the coronavirus outbreak has now collided with reality: The coronavirus is spreading, quickly, to more countries. The death toll is rising, and the outbreak is wreaking havoc on global supply chains. Efforts to detect and contain it have failed.

And the White House's efforts to contain and control government messaging on the disease have come under attack. Trump is highly concerned about the market and has encouraged aides not to give predictions that might cause further tremors. He is expected to talk to officials on Wednesday, said aides, who spoke on the condition of anonymity to discuss private conversations.

At least publicly, Trump has devoted the majority of his public statements to slamming Democrats or complaining about the criminal justice system. But he has not publicly engaged much about the coronavirus, other than to downplay what he believes the impact will be on the United States. Privately, Trump has become furious about the stock market's slide, according to two people familiar with the president's thinking, who spoke on the condition of anonymity to share internal details.

While he has spent the past two days traveling in India, Trump has watched the stock market's fall closely and believes extreme warnings from the Centers for Disease Control and Prevention have spooked investors, the aides said. Some White House officials have been unhappy with how Health and Human Services Secretary Alex Azar has handled the situation, they said.

On Tuesday afternoon, as the Dow flirted with its second-straight 1,000-point drop, Azar held a news conference that struck a markedly less concerned tone about the virus's impact on the United States. By that point, the market didn't budge.

In January, during his trip to the World Economic Forum in Switzerland, Trump dismissed questions about the coronavirus's impact in the United States.

"We have it totally under control," Trump told CNBC at the time. Pressed about the confirmed case in Washington state, Trump said, "It's one person coming in from China. We have it under control. It's going to be just fine."

Now there are more than 50 people in the United States with coronavirus, and health officials believe the number will continue to grow.

On Tuesday, as the stock market began its second day of a precipitous slide, Nancy Messonnier, a top CDC official, told reporters that the coronavirus's impact on the United States "may seem overwhelming and that disruption to everyday life may be severe."

She said that it was inevitable the virus would spread more broadly in the United States and that people needed to begin taking precautions.

White House officials often face a tricky balance of trying to assure the public while also not dismissing threats that could become calamities. The Dow is still up markedly from 2017, when Trump took office, but it closed Tuesday at its lowest level since October, before the coronavirus was even detected in China.

"You don't want to overly feed the darkness, but if you seem like all you do is happy talk then you lose credibility," said Gene Sperling, who served as a top economic adviser during the Clinton and Obama administrations. "You get a three-hour high from your happy talk, but lose the long-term ability to be seen as serious, factual and potentially reassuring at a later point when it might be justified. This White House may already be in danger of losing the capacity to be seen as serious."

Now, White House officials' efforts to contain the economic fallout from the coronavirus have created new political hazards, as they publicly downplay the threat while other federal officials with a background in health and diseases are warning of more severe consequences for inaction. The administration also risks creating new health hazards, should the pressure to assure investors of economic stability undercut its public health message about the mounting threat.

In a statement, the White House defended its response, saying comments have been taken out of context or twisted to try to distract from the Trump administration's efforts so far. Administration officials strongly denied that the CDC and White House economic team were at odds on Tuesday.

"Unfortunately what we are seeing today is a political effort by the Left and some in the media to distract and disturb the American people with fearful rhetoric and palace intrigue," White House spokesman Judd Deere said in a statement. "The United States economy is the strongest in the world thanks to the leadership and policies of President Trump. The virus remains low risk domestically because of the containment actions taken by this Administration since the first of the year."

In India this week, Trump said that the coronavirus is "very well under control" in the United States and that "the situation will start working itself out."

"Stock Market starting to look very good to me," Trump tweeted on Monday.

The stock market opened up slightly higher on Tuesday, but the slide began as CDC officials began briefing lawmakers about how problems were worsening. It was a few hours later when Kudlow appeared on CNBC and offered an assessment that appeared to contradict what health officials had conveyed.

Kudlow has argued repeatedly that while China may be hurt economically, the impact on U.S. growth is likely to be minimal, citing robust consumer confidence and data showing domestic manufacturing remains strong. Commerce Secretary Wilbur Ross has made similar assessments, telling Fox Business last month, "I think it will help to accelerate the return of jobs to North America, some to [the] U.S., probably some to Mexico as well."

Their comments come amid widespread concern that the shuttering of numerous Chinese firms could wreak havoc with American companies' domestic supply chain. U.S. companies do not appear to be cheering the economic disruption. In fact, many are fretting that it could have a severe impact on their operations.

Global markets also appeared to brush off the pronouncements of economic stability from Kudlow and Trump.

"The CDC is probably more credible about the risks from the coronavirus than anything the Trump economic officials say," said Chris Rupkey, chief financial economist at MUFG Union Bank. "The market is coming down on the CDC."

The White House's assurances also fell flat on Capitol Hill, as lawmakers from both parties expressed outrage at the Trump administration's seeming unfamiliarity with facts about the scale of the problem.

Within the span of a few hours, the CDC's messaging appeared to change.

In the afternoon, the CDC appeared to offer a more optimistic assessment.

The White House may face further practical and political constraints in its ability to contain the virus. The White House asked Congress to approve a $2.5 billion plan to combat the virus on Monday, but it immediately touched off a partisan firestorm and denunciations from Democrats who said it was far too little to meet the growing threat.

The White House's response to the coronavirus has continued to change. It recently moved to block or restrict travel from China, which some officials believe has helped keep the number of cases in the United States low compared with other countries. But further steps could end up sparking more concern. The administration could issue further travel restrictions on the nations to which the disease has spread, but doing so could further cut off ties between the United States and other countries, fanning even more investor concerns.