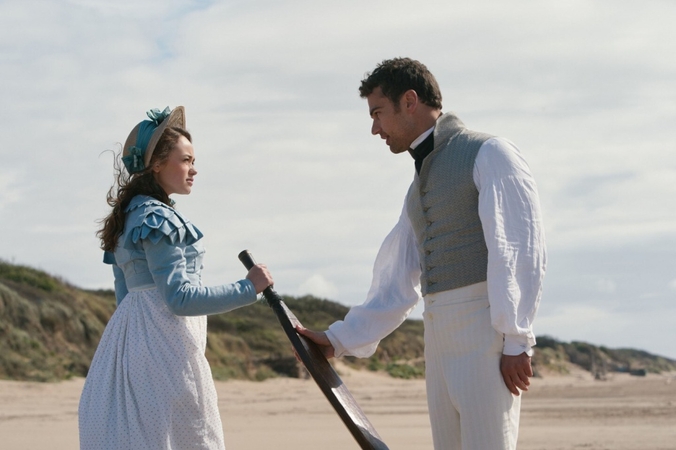 (EDITORS: This story reveals the ending to Masterpiece's "Sanditon" series.) - - -

Jane Austen had written a dozen chapters of a new novel in 1817 when she put down her pen and, mere months later, succumbed to a deadly illness. The unfinished manuscript satirized English gentry and, similar to her later works, seemed more interested in the dynamics of a small community than with those between a heroine and her love interest. Its working title, "The Brothers," signaled a shift as well.

The story was renamed "Sanditon" in the early 20th century after the seaside resort town in which it is set. Charlotte Heywood, daughter of a country gentleman, spends a summer there after her family plays host to a Sanditon resident, Mr. Parker, injured in a carriage crash near their home. His dream is to modernize the town by turning it into a wellness getaway for hypochondriacs. The original manuscript ends shortly after Charlotte arrives and encounters, among others, Mr. Parker's handsome brother Sidney.

Numerous writers have set out to complete Austen's story - and the latest attempt, an eight-part series that aired in Britain last year before hopping to PBS in the United States, has proved what a challenge that can be. Austen's happy endings are a security blanket for many of her fans. Showrunner Andrew Davies (1995′s "Pride and Prejudice"), who already raised eyebrows over his decision to include racy sex scenes, made the bold decision to have Sidney propose to a different woman in the finale. This upset fans, but some Austen scholars suggest the reasoning behind this narrative fits with the pragmatism of Austen's work.

Charlotte (Rose Williams) and her would-be Mr. Darcy figure Sidney (Theo James), are kept apart by tragedy. An uninsured building belonging to Mr. Parker (Kris Marshall) catches on fire, and Sidney decides he must secure his family's finances by getting engaged to a wealthy heiress instead. The finale cuts to black after Charlotte leaves Sanditon, and Sidney, behind. Jaws dropped across the web: "Wait. So that's it then?" one fan tweeted.

It could be. The fate of "Sanditon" relies entirely upon how it performed with American audiences, as it failed to earn enough of a following in Britain for original broadcaster ITV to renew it. (The production company Red Planet Pictures tweeted Tuesday that there are "still" no plans for another season, suggesting there's the slimmest chance this could change.) The series shocked some Austen fans as early as the first episode, which features male nudity, a brief instance of assault and an implied incestuous relationship. In discussions on the r/janeausten subreddit, users have commented on how such scenes are "mostly unnecessary."

Those who worked on "Sanditon" have defended the series against claims of it being too risque. In a recent interview, Davies noted that, while often implied, "sexual desire is one of the prime motivations in almost all her plots." British author Paula Byrne, who has written multiple books on Austen and consulted on the series, told The Washington Post she signed on because the production "felt very fresh."

"People want to believe Jane Austen is cozy, which is just so crazy," she said. "That's the narrative they want, but it's not the true narrative."

Deidre Lynch, an Austen scholar at Harvard University, expressed surprise at the notion of fans being taken aback by the series's risque depictions: "There's been a tradition since the '90s of sexing up Austen," she told The Post, referring to the famous moment in Davies's "Pride and Prejudice" series where Colin Firth's Mr. Darcy emerges from a lake dripping wet "in order to cool down because he's feeling so hot and bothered about his encounters with Elizabeth Bennet."

Even with happy endings like the one in "Pride and Prejudice," Austen's primary concern isn't necessarily romance but the social and economic norms shaping such relationships. What readers have long appreciated about Austen's work is how it relays "the sense of a writer who had an amazing capacity to convey everyday life," Lynch said. Her heroines are ultimately in pursuit of self-knowledge and, when faced with a major life decision, often weigh matters of the heart against their economic and social responsibilities.

"Austen is really interested in how women obtain a sense of themselves," Lynch said. "What's so funny is that I think the Hollywoodization of Austen has made us think of her as a romantic writer."

Byrne noted that Austen wrote "Sanditon" in 1817 - significantly later than works like "Sense and Sensibility" and "Pride and Prejudice," both of which she began to draft in the 1790s. Austen seemed to be exploring new ground with this manuscript, which features her first-ever black character with a significant role - Miss Lambe (Crystal Clarke), a young heiress from the West Indies - and signals a departure from the heroine-focused marriage plot.

By the "Sanditon" finale, both Charlotte and Sidney are different, more self-aware people than they are in the first episode. The fact that Mr. Parker's failure to insure his property is what keeps them apart is painful yet practical - and maybe not the main takeaway. Lynch noted that Sidney is barely mentioned in Austen's manuscript, which instead spends much of the 12 chapters poking fun at men "who want to be gallant but are too busy drinking the herbal teas they need for the lining of their stomachs."

"There might even be signs in 'Sanditon' that she's a little bit tired of the marriage plot," Lynch added.

Even so, "Sanditon" creators had planned for a more traditional ending all along, crafting their story around a two-season arc. A producer confirmed to Vulture that if the show moves forward, Charlotte and Sidney would, in fact, get together. ("Absolutely! We're not that perverse!" she said.) Byrne confirmed that a second season would "probably go in a different direction," but admitted that she likes the complexity of the finale.

"Being Jane Austen, it's never quite that simple," Byrne said. "There's always a sense of, things don't go quite how we like it. It's interesting when people say, 'This is not Jane Austen.' Well, did you actually read 'Sense and Sensibility'? ... There is precedent for the girl not getting the boy."