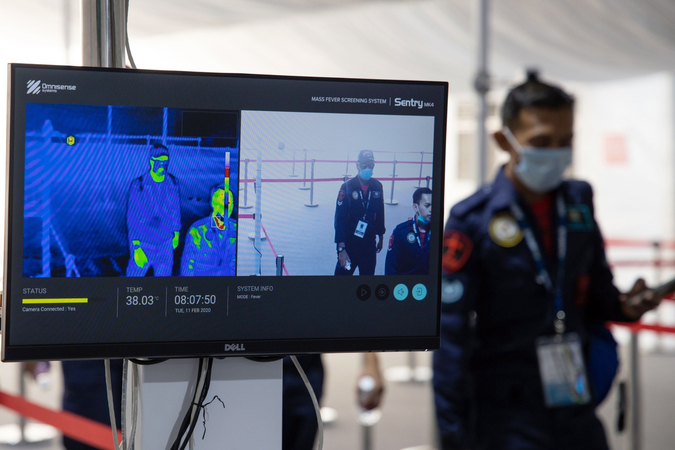 The World Health Organization raised its risk assessment of the coronavirus to "very high" Friday, citing risk of spread and impact. WHO officials said their assessment — the highest level short of declaring a global pandemic — doesn't change the approach countries should take to combat the virus, but should serve as a "wake up" and "reality check" for countries to hurry their preparations.

WHO officials said in a Friday briefing that declaring a pandemic would be tantamount to throwing in the towel on containing the virus and signaling to governments that they should focus instead on mitigating its effects. WHO officials said they want countries to pursue containment and mitigation simultaneously, which is the main reason they are not declaring a pandemic.

"To accept that mitigation is the only option is to accept that the virus cannot be stopped," said Michael Ryan, WHO director for health emergencies. "And we've seen evidence from China that this virus can be significantly curbed in its spread if robust measures are taken."

As the virus has spread from China to Europe and the Middle East and beyond, there are clear instances where containment has failed. But WHO officials said there are also examples where containment has succeeded and they don't want countries to stop trying. They pointed to countries such as China and Singapore, where new cases have declined, and other countries that detected only one or two cases and have not reported any since.

Public health officials define containment as steps to interrupt transmission, like tracing patient contacts, isolation and quarantine. Mitigation is when you accept that you cannot prevent the virus from spreading, and instead focus on treating patients, vaccines and reducing the strain on health systems and society.

WHO officials said that even if containment efforts in some places fail, they are slowing down the virus and giving countries much-needed time to prepare.

Fears that a coronavirus pandemic could tip the world economy into recession sent global stocks into a tailspin, with markets on track for their worst week since the financial crisis that began in 2008.

The Dow Jones industrial average plunged 1,000 points in the morning, swinging widely throughout the session. It closed down 357 points, or 1.4%. The Standard & Poor's 500 index shed 0.8% while the Nasdaq rallied to end flat.The 10-year Treasury yield, a key marker in global finance, also hit a record low Friday, a sign that investors are fleeing equities for the safety of bonds. The Cboe Volatility Index, known as the VIX, surged to its highest level since the Great Recession, signalling to investors that more volatility is ahead.

While there were indications that the outbreak may be slowing in China, France and Germany reported upticks in infections and South Korea's tally surpassed 2,300, as more events were canceled and airlines said they would cut flights. In Japan, officials declared a state of emergency on the northern island of Hokkaido and told residents to stay indoors as the country reported its 10th death from covid-19, as the disease caused by the virus is known.

Investors have watched the outbreak with increasing concern. U.S. oil futures slipped again Friday, raising expectations that officials from oil-exporting nations will cut output after they meet next week.

Here are the latest developments:

- Stocks in Europe and Asia tanked as the specter of prolonged economic disruption haunted investors. Swiss authorities on Friday banned all events with more than 1,000 participants until mid-March, forcing the cancellation of the Geneva International Motor Show, which was scheduled to open next week.

- Japan's Hokkaido island - where Olympic marathons are due to take place this summer - declared a state of emergency. Olympic organizers indicated that they would announce plans next week to scale back the torch relay.

- An Italian man diagnosed with the virus in Nigeria marks the first confirmed instance of the virus in sub-Saharan Africa.

- Far more coronavirus cases appeared likely to be confirmed outside China, where the crisis originated, than within it. China announced 327 new cases and 44 deaths. South Korea announced 571 new cases Friday, bringing its total to 2,337, while France and Germany confirmed new infections.

Also Friday, President Donald Trump tweeted that the virus was spreading "very slowly in the U.S." and suggested that his political opponents were blaming him for the outbreak. His remarks came after a whistleblower alleged that the U.S. government sent workers without proper training for infection control or appropriate protective gear to greet evacuees from Wuhan, China.

Acting White House chief of staff Mick Mulvaney sought to downplay the threat of the coronavirus to the United States but acknowledged it could lead to school closures and other disruptions. He made the comments during an appearance in which he also accused the media of hyping coverage to "bring down the president."

"Is it real? It absolutely is real," Mulvaney said at the annual Conservative Political Action Conference outside Washington. "But you saw the president the other day — the flu is real. . . . Are you going to see some schools shut down? Probably. May you see impacts on public transportation? Sure. We know how to handle this."

Mulvaney also accused the media of ignoring the administration's early planning efforts because they were focused on Trump's impeachment trial.

He said the media covered the impeachment process intently because "they thought . . . it would bring down the president."

"The reason they are paying so much attention to [the coronavirus] today is that they think this is going to bring down the president. That's what this is all about," Mulvaney added.

He said a reporter emailed him to ask what the president planned to do to "calm the markets."

"Turn off your televisions for 24 hours," Mulvaney said.

Lawmakers and aides said Friday they intend to work through the weekend to get agreement on an emergency spending bill to fight the coronavirus. A vote in the House could come as soon as next week.

"We need to move as quickly as possible," said Rep. Rosa L. DeLauro, D-Conn., a senior member of the House Appropriations Committee.

Negotiators are circling around a $6 billion to $8 billion commitment, with some officials involved saying they anticipate ending up at the higher end of that range. The final figure will dwarf the $2.5 billion spending plan the White House proposed earlier this week. Also, the White House plan included only $1.25 billion in new funding, while taking more than $500 million from an Ebola response fund and other sums from the National Institutes of Health and elsewhere. The congressional spending bill is expected to be all new money.

"We're not going to take money from Ebola, we're not going to take money from NIH and other places for an emergency supplemental," DeLauro said. The bulk of the spending will be directed to the Health and Human Services Department, which houses NIH and the Centers for Disease Control and Prevention. DeLauro cited a litany of needs, including vaccine development, test kits, and reimbursement to state and local governments.

White House legislative affairs director Eric Ueland told reporters Friday, "We've got great interaction with folks here on the Hill, and we're hopeful they can land a pretty good and responsible package by early next week."