PARIS - The protective face masks have become more intentional. Instead of institutional white surgical masks, guests entering the Loewe show Friday morning at the UNESCO offices had the option of grabbing one in basic black. Having consumed a steady stream of coronavirus updates, folks knew the masks offered little protection from free-floating germs, but still, a proactive gesture was something.

No major shows have been canceled, but a sustainability program scheduled at the British ambassador's residence was postponed because of health concerns. The fashion conglomerate LVMH called off a cocktail party celebrating the finalists for its fashion prize. The usual battalions of design house employees who fly in from the U.S. to help oversee these runway shows are fewer. For example, Chanel's U.S. team will not travel here; the French staff will pick up the slack. Worries about quarantines have some folks leaving early. 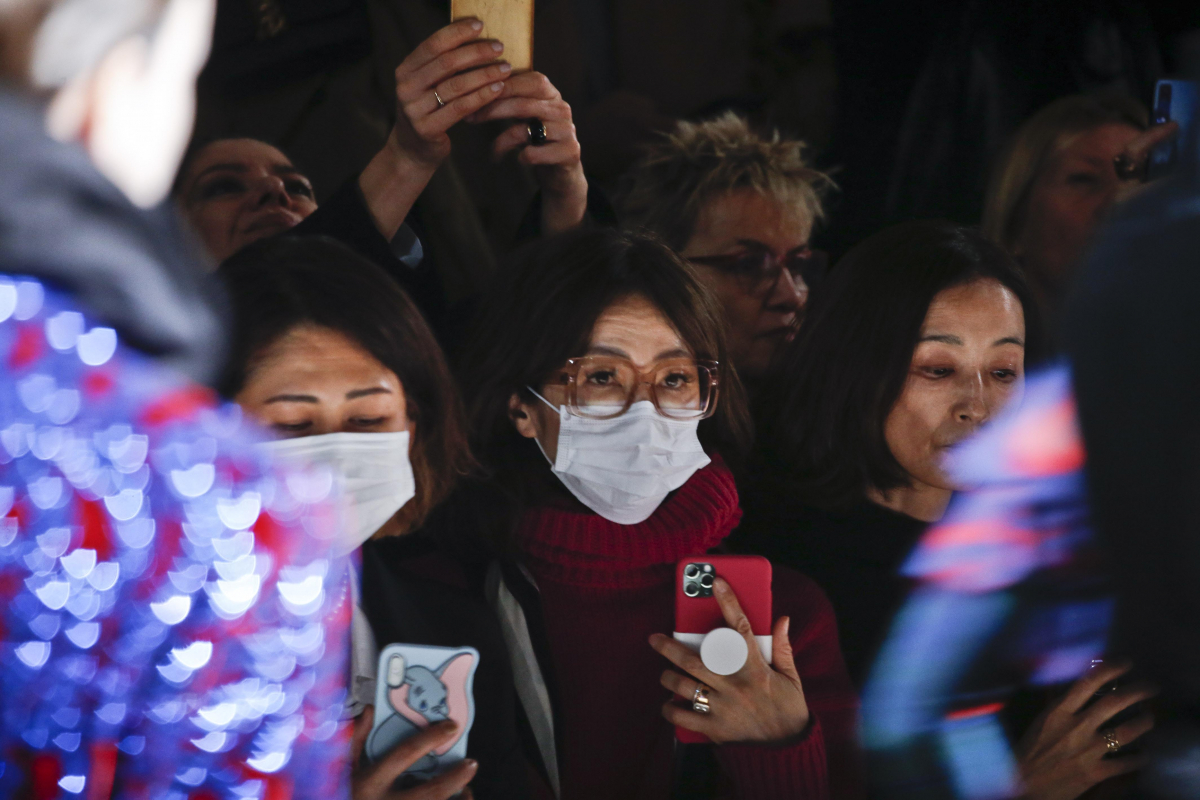 And yet, the crowds do not appear to have thinned. The models are still working. And the designers are still taking their bows. Fashion goes on in an environment that is hyper-aware of the permeability of borders and the interconnectedness of us all. In this moment, inclusiveness takes on a different meaning. No one stands apart.

The runways remind us how many different points of view, how many different aesthetic dreams flourish in this international city. It's a place that embraces the sophisticated ease of Chloe, the subversive imagination of Rick Owens, the audacious exuberance of Dries Van Noten and the intellectual gamesmanship of Loewe. These design houses have nothing in common. Oh, sure, there are some broad trends that might connect them - the full trousers, some chunky shoes - but these collections were especially terrific precisely because they are so unlike anything else. 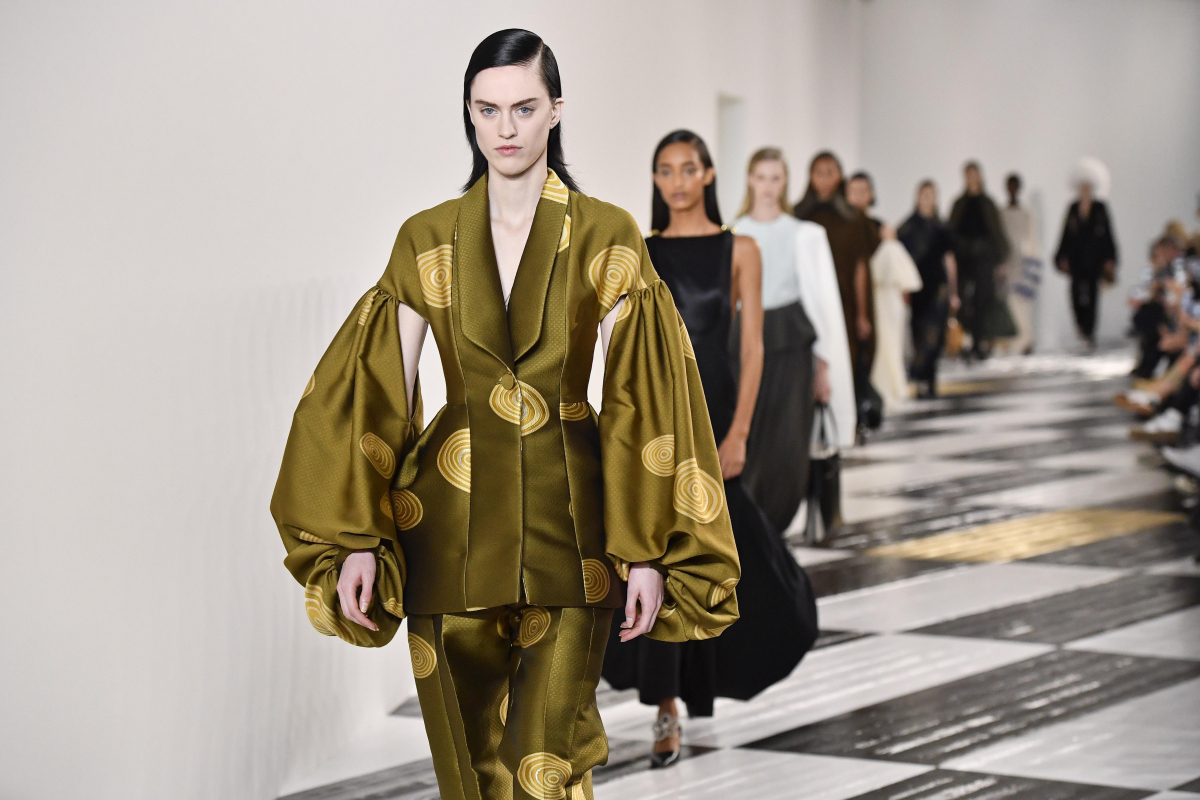 How the designers at these labels express themselves has nothing to do with what someone else has already done. Their work doesn't convey aching insecurity wrapped in a layer of self-conscious cool. These designers aren't performing; they are simply breathing life into something that is truly their own.

Season after season, Loewe designer Jonathan Anderson has made a case for the craftsmanship of the individual garment. He doesn't tell seamless stories; each look can stand alone. It doesn't have to be in conversation with everything else on his runway. To finally understand that has been a bit of a revelation. It means looking at his work, particularly his fall 2020 collection, with great admiration. It is a stunning exploration of silhouettes and texture and craftsmanship. His fabrics are lush, the dresses play with volume in the sleeves and the hips. A pair of Brobdingnagian-size trousers are at once absurd and delightful.

His coats are a patchwork of fabrics and colors; his dresses are adorned with the artful compositions of the Japanese ceramist Takuro Kuwata; marabou hats fluttered as models walked. Anderson's work sends the mind whirling as it tries to decipher the lines and angles that conspire for such beautiful results.

Dries Van Noten's avalanche of color and pattern delight the eyes. His collection, shown Wednesday at the Opéra Bastille, merged grunge and punk, with rock-and-roll and luxurious fabrics to create a kaleidoscope of joyful volatility. The coats often wrapped around the body, the trousers were artfully slouchy, patterns clashed with abandon. It was all a reflection of the distinctive aesthetic vocabulary that Van Noten has created, yet he revealed another facet of himself: This is who I am. Isn't that what we all want? To be able to say that and to have the world respond with applause?

That was at the core of the collection Rick Owens presented Thursday evening at the Palais de Tokyo. It was an expression of the heart. It was about an insecure boy from California who grows up to be an expressive designer whose work brings our dreams and fears into the light. His models, in their giant Lucite platform heels, towered over the audience as they walked through a rolling cloud of dramatic mist. Their duvet capes - a collaboration with Moncler - billowed out behind them. The models' long, lean physiques were emphasized by the high slit dresses that slithered around the torso and over the hips. They were like otherworldly women attired in shades of cherry red and glorious fuchsia and sky blue. And, of course, they were wrapped in the reassuring embrace of black.

Owens' clothes are cool, not because they exude irony or aloofness, but because they are brutally honest. They stand outside of the mainstream in a place of vulnerability. There's no winking and nodding to the Establishment. There's just the simple but brave willingness to live outside of it.

At Chloe, designer Natacha Ramsay-Levi offers a lesson in centrism, which is to say, she creates great clothes that look modern and smart. They don't demand that you free up brain space to figure them out. They don't need to be dissected. Wearing them probably won't make you feel vulnerable or powerful, but you'll likely feel quite good in them. They won't make your heart skip a beat, but shouldn't the people in your life do that for you - not your possessions?

Ramsay-Levi incorporated the work of three female artists when she unveiled her collection Thursday morning at the Grand Palais. The gilded totems of French artist Marion Verboom delineated the show's set. The voice of '60s British singer Marianne Faithful echoed from the soundtrack and the art of Rita Ackermann, who lives in New York, enlivened some of the garments. The dresses flowed, the coats and jackets were belted, the trousers were beautifully tailored. The collection referenced the '60s and '70s without getting stuck there.

It was an enticing collection that celebrated women with grace but without fanfare. It was, in short, a reprieve. Quietly and deliberately. Fashion carries on.