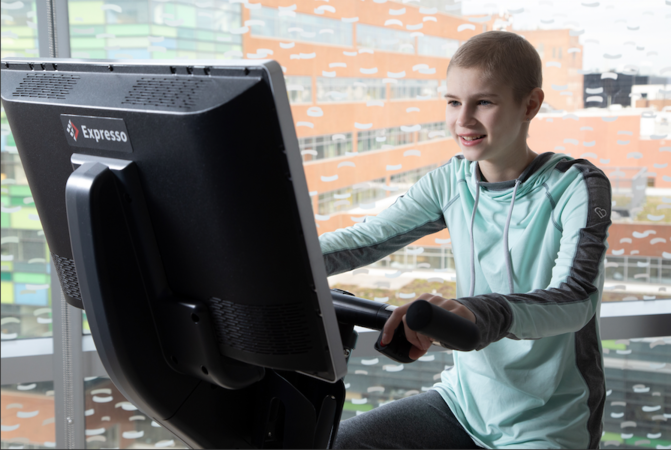 "It's much better than walking laps around the unit," says Bridget Diveley, who underwent treatment at Johns Hopkins and used the bicycles at the hospital. MUST CREDIT: Joe Rubino

By Special To The Washington Post · Ben Opipari · HEALTH

The day before Matthew Simon was to begin crew practice in 2015 as a sophomore at Walt Whitman High School in Bethesda, Maryland, he was diagnosed with leukemia.

Simon was a rower who worked out daily. His initial stay for treatment at Children's Hospital was three weeks long, and the sedentary routine of chemotherapy was tough. "I got stir crazy," Simon said. "Patients in a pediatric oncology unit are immunocompromised, so we couldn't leave the floor. There's not much to do but walk around."

He walked laps around the unit when his strength permitted. But walking isn't rowing, so the staff found an Expresso Go virtual reality bike and moved it into his room, where he rode it daily. After this initial round of treatment, Simon moved to Johns Hopkins, where he sometimes spent several days at a time as an inpatient. There was an exercise bike there too, which he rode often. It helped ward off some of the fatigue from the grueling chemotherapy and even elevated his mood. It was as if he were contributing to his own treatment plan.

"I felt like I was helping myself stay healthy," he said.

Simon, now in his second year at the University of Virginia, discovered something seemingly counterintuitive: exercising during chemotherapy made him feel less fatigued. Yet as little as 20 years ago, medical experts prescribed bed rest to conserve energy for treatment. It wasn't until 2010 that the American College of Sports Medicine established exercise guidelines for cancer survivors and patients. Its directive, updated in 2018, is simple: "avoid inactivity." Exercise training, it said, "is generally safe for cancer survivors."

Chemotherapy wreaks havoc on the body. It causes fatigue, muscle loss, nausea, pain and disrupted sleep. Patients can become depressed. But regular exercise can help minimize these side effects in cancer patients. Evidence has shown that a consistent exercise routine can reduce cancer-related anxiety and fatigue, and it can reduce depressive symptoms both during and after treatment. Doctors are spreading the word that exercise improves quality of life and that patients need to stay moving after their treatment concludes.

But getting kids to exercise isn't always easy, which is why Simon two years ago started an organization, Bike to Fight, to raise money to place Expresso Go bikes on adolescent and young adult oncology floors in hospitals nationwide. The bikes are not cheap, retailing for about $7,000, although Interactive Fitness, the company that makes the Go, gives Simon's group a discount. So far, the bikes are being used in five hospitals, including Johns Hopkins and Children's Hospital. They feature 26-inch screens with interactive courses and games that riders play.

The bikes have been a huge hit, both with patients and their doctors.

The easy availability of exercise "is a way to normalize [young patients'] lives and a huge psychological benefit. It's also a way to improve stamina," says Pat Brown, director of the Pediatric Leukemia Program and associate professor of oncology at Johns Hopkins. The bike helps patients whose sleep cycle is disrupted by treatment.

"Sleep/wake cycles can be unpredictable in hospitals, and it's discouraging to be awake at 3 a.m. in a hospital bed with nothing to do. The bike is always there for them," Brown says.

Bridget Diveley, 12, rode the bike while undergoing treatment at Hopkins.

"It's much better than walking laps around the unit," she says. Like many of the patients, Diveley's favorite were the virtual reality courses where she raced other people. And while the bike did make her tired, "it also made me feel motivated."

Another one of the bikes is at Massachusetts General Hospital, where psychologist Giselle Perez-Lougee, chair of the Adolescent and Young Adult (AYA) Oncology Task Force, says the exercise the bike provides is particularly important to this cancer patient population, which has "an elevated risk for adverse physical and emotional health outcomes. There are many health benefits of exercise during and after cancer treatment, but research suggests that AYAs are not meeting exercise guidelines." (The National Cancer Institute defines the AYA population as ages 15 to 39.)

At Comer Children's Hospital in Chicago, where Simon placed a bike in the pediatric oncology unit, physical therapist Catherine Kennedy tells her young patients that opting out of exercise is not an option. "It's a way to fight the tired feeling they can get from chemo," she says. For those who need to be coaxed into exercising, Kennedy encourages short bursts of about 10 minutes throughout the day rather than one long session so that it's less daunting. Any movement, Kennedy says, is better than no movement.

At the same time, the increased survival rates are happening in part because of powerful chemotherapy drugs that also can cause lasting damage to the cardiovascular system, or cardiotoxicity.

"The cardiac mortality rate in cancer survivors is about 10 times greater compared to their healthy siblings and peers," she says. "We see cardiotoxicity decades after treatment. But the good news is that we have decades to change it," and lifestyle changes are an important part of that.

When her young patients finish cancer treatment, Ruble sits down with every family and stresses the importance of regular exercise.

"They're already behind [with their health], so my job is to find the secret formula to get these kids moving again," she says.

At the Lee Jones Lab at Memorial Sloan Kettering Hospital in New York, researchers are studying the long-term cardiovascular side effects of chemotherapy. They are also exploring the benefits of regular exercise on cancer treatment.

"We know the benefits of exercise on heart disease, so given the cardiotoxicity of chemotherapy [on the heart], we hope to apply it to cancer survivors as well," exercise scientist Lee Jones says. He also is interested in looking at how patients may be able to use exercise to receive or help them tolerate stronger - and therefore possibly more effective - treatment. Jones hopes exercise will eventually be a regular adjunct to chemotherapy.

But what exercise aims to improve - energy, self-esteem, mood and mobility - is often what makes it difficult to get started: motivation can be low when cancer treatments sap your strength and make you depressed. Enticing patients to overcome those feelings often runs up against a mountain of misinformation.

"There's still this idea that you should save your energy to fight the cancer," she says, even though it has been shown that in most cases exercise while undergoing treatment is safe.

Betsy O'Donnell, an oncologist at Mass General, says she would like to see Expresso Go bikes connected in hospitals across the country for all cancer patients.

"My dream is a nationwide social network of cancer patients who ride the bikes," she says. "Then they could take that network home and let it inspire them. We could have programming just for cancer survivors, even maybe a class for just, say, breast cancer survivors." That connection would effectively be one giant support group, helping to normalize the lives of patients who are living longer than ever before.

Simon, meanwhile, is back to his regular exercise routine.

At U-Va., he tries to make it to the gym five days a week. He sees a cardiologist twice a year to make sure he has not developed any heart complications from the chemotherapy he completed in 2018. So far, there are none.

"I exercise for the same reasons I did when I was undergoing treatment: to relieve stress and stay healthy," Simon says. "And to ensure there are no residual side effects from my treatment."