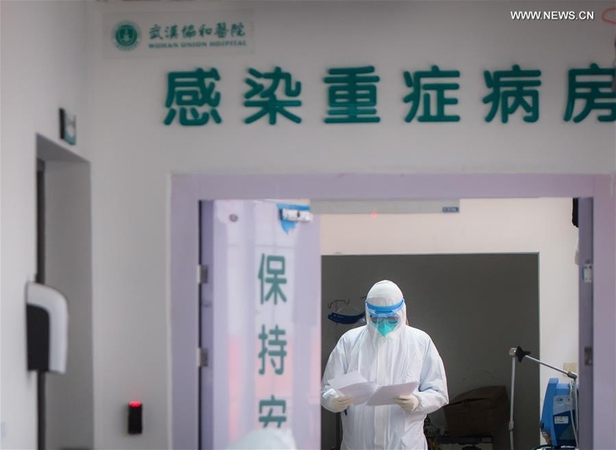 It is now surely one of the most-read medical reports among caregivers in intensive care units around the world who are bracing for the novel coronavirus. The paper, published in the British medical journal the Lancet last month by a team of doctors working at the center of the outbreak, is the first study to characterize the clinical course, treatment and mortality of a group of critically ill patients infected by the new SARS-CoV-2 virus.

The report is highly valuable, say clinicians in the United States and Europe, because it details the course of the disease in critically ill patients - that small but worrisome subset who end up in ICUs. The 52 patients were treated at the Jinyintan Hospital in Wuhan, China, during the first month of the epidemic, from the end of December through January.

The authors tracked the constellation of life-threatening symptoms, what drugs patients were given to try to combat the infection's assault on the lungs, how supplemental oxygen was administered, and the outcomes - whether patients survived or died in the ICU.

The grim conclusion: For patients infected with the novel coronavirus who became critically ill with pneumonia and entered their ICU, the doctors recorded "high" numbers of fatalities. Of the 52 people included in the sample, 32 died in the 28-day span of the study, revealing a death rate of 61 percent. Most died within seven days of being admitted to the ICU.

For comparison, mortality rates generally ranging between 30 and 40 percent are observed for patients who are sickened by ordinary seasonal flu and are fighting pneumonia and acute respiratory distress syndrome in ICUs.

Specialists outside of China applaud the treatment given by the Chinese doctors to their patients in the study, saying that similar levels of care would be found in American and European critical care units.

Like the doctors in China before them, health-care workers in South Korea and Italy are seeing their ICUs filling with critically sick patients. In Lodi, in northern Italy, one infectious-disease doctor told The Washington Post that coronavirus had hit "like a tsunami" at his hospital, where more than 100 out of 120 people admitted with the virus also developed pneumonia.

Clinicians and researchers interviewed by The Post, all of whom had read the Lancet study by Xiaobo Yang and his colleagues, said they could only imagine - reading between the lines in the dry clinical data presented in the seven-page paper - what those ICUs were like.

"They had an explosion of cases in China that overwhelmed hospitals," said Kristina Crothers, a pulmonary and critical care medicine specialist and a professor of medicine at the University of Washington.

"Those doctors were making heroic efforts to keep their patients alive," said James Chalmers, a clinical professor at the School of Medicine at the University of Dundee in Scotland. "They were doing everything they could."

There are no targeted therapeutics or vaccines for the new virus - and so doctors and nurses in the ICUs are left to administer drugs and oxygen to keep the patients alive long enough for their bodies to fight the infection and repair lungs ravaged by pneumonia.

As the virus attacks the lungs, it becomes harder and harder for patients to get enough oxygen into their blood streams to support their kidneys, livers and hearts.

In the worst cases in the Wuhan ICU, the viral pneumonia led to acute respiratory distress syndrome, or ARDS, a life-threatening inflammation in the lungs.

Of the 52 patients with pneumonia, most had to be given supplemental oxygen - 37 were put on mechanical ventilators.

Recently, the WHO sent a team of international experts to China to investigate the clinical course and treatment of patients, including the seriously ill. They found that 5 percent of the novel coronavirus cases required artificial respiration, and 15 percent needed to be given highly concentrated oxygen - the kind a patient may breathe through a tube leading to the nostrils.

The WHO reported that 45 hospitals were operating in Wuhan. The experts noted that 80 percent of the people infected had only mild disease, but that the most seriously ill needed supplemental oxygen to recover - and that the recovery period was three to six weeks.

"The mass and duration of the treatments overburdened the existing health care system in Wuhan many times over," the WHO team concluded.

A steep wave of very sick patients with pneumonia could outstrip not only available beds in ICUs but also the number of ventilators available in many countries. In the Northern Hemisphere, the outbreak of the novel coronavirus is coming on top of the winter influenza season.

The Chinese doctors gave their patients antibiotics to fight secondary infections, and antivirals, including medicines considered experimental. They also tried antibodies and steroids.

"They were losing patients left and right. They're trying their best. They're using every tool in the toolbox," said Charles Dela Cruz, an associate professor of pulmonary care medicine at the Yale School of Medicine. "They're doing the right things . . . everything that might help and not hurt."

And they were still losing many patients.

The WHO report and the Chinese study found that those who died were older and had preexisting conditions such as cardiovascular disease, uncontrolled diabetes, high blood pressure, chronic respiratory diseases and cancer.

The Chinese report on the 52 patients did not list a cause of death for the 32 who did not make it out of the ICU.

But doctors with long experience treating serious pneumonia and ARDS assume that the Chinese caregivers saw their patients' inflamed lungs overwhelmed by fluids, their blood pressure dropping dangerously, and their organs failing and then shutting down as they were starved of oxygen.