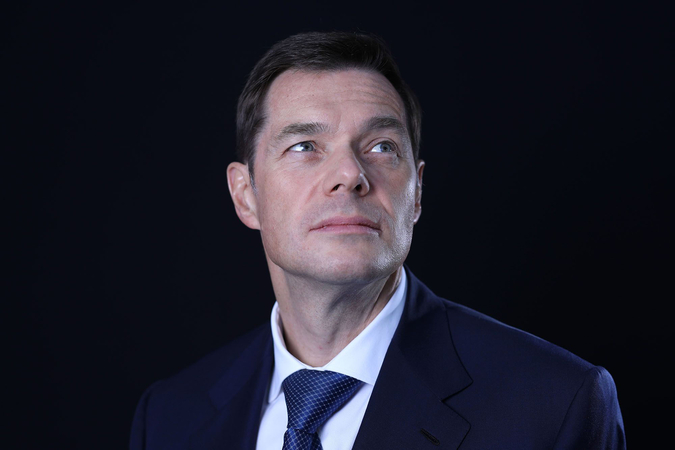 Alexey Mordashov, poses for a photograph following a Bloomberg Television interview at the St Petersburg International Economic Forum (SPIEF) in Saint Petersburg, Russia, on May 24, 2018. MUST CREDIT: Bloomberg photo by Chris Ratcliffe.

Alexey Mordashov has faced plenty of challenges building an empire spanning gold, power, steel and tourism. Now he has to work out how to pass a $17 billion fortune to his children in a country with no precedent for wealth transfer on this scale, and without destabilizing the massive business.

"As many as 140,000 people work for my companies, and I am responsible for them. I need to think about how to make the system stable when inherited," Mordashov, a father of six and Russia's fifth-richest person, said in an interview near Moscow.

Mordashov, 54, said he's developing a plan for the wealth transfer, while helping his children prepare for the responsibility. He's one of dozens of tycoons including Vladimir Potanin, Suleiman Kerimov and Leonid Fedun who got enormously rich in post-Soviet Russia now intensifying efforts to figure out what to do with their fortunes.

Their children, frequently entering adulthood, are among the first to gain power and money by inheritance after the communist regime's collapse. It's a process that will have profound ramifications for the country's economy and politics.

Some businesses employ hundreds of thousands of people, their leaders are frequently close allies of President Vladimir Putin and there's more than $270 billion at stake for just 23 people on the Bloomberg Billionaires Index.

"Russia is practically the only country in the world where there have been no precedents for the transfer of large fortunes by inheritance for almost a hundred years," said Andrey Shpak, head of research at the Wealth Transformation Center at Skolkovo Moscow School of Management.

Mordashov made his fortune through investments in steelmaker Severstal PJSC. He later diversified to gold, power equipment and now has stakes in media assets, a mobile carrier, tourist companies and a supermarket chain.

Mordashov said he is considering a fund "with a certain model of management, that will allow my children to participate," he said, without elaborating.

Last year, he started transferring holdings to his sons Kirill, 20, and Nikita, 19. They got a 65% stake in gold producer Nordgold valued at $780 million and two-thirds of the stake in TUI worth about $730 million.

The brothers haven't started managing the assets as they are still students in Moscow, according to Mordashov. He said they probably won't start their careers working within his companies. They need to experience real life working for others as nepotism creates business challenges, Mordashov added.

There is no ideal form of wealth structure, said Shpak, whose center consults with wealthy families. How assets are transferred will depend partly on where they're held and relations within a family.

Interest in international trusts has declined, in part because of stricter regulatory requirements in foreign jurisdictions, he said.

Some tycoons are taking a radically different approach.

Vladimir Potanin, Russia's richest person and a father of five, signed Bill Gates and Warren Buffett's Giving Pledge initiative in 2013, promising at least half of his wealth to philanthropic causes.

"I do not think that to give such a huge fortune to children would be the right decision," Potanin said in an interview near Moscow. "This will just ruin their life."

Billionaire Mikhail Fridman also plans to give his wealth to charity, he said in an interview. His son Alexander rents a two-room flat on the outskirts of Moscow for $500 a month and started his own business after finishing studying in the U.K. last year.

Regardless of what they do, Shpak urges the tycoons to make their decisions quickly.

"The lack of a clear succession plan and targeted training of the heirs increases the risk that a considerable part of Russian fortunes may be actually lost over time," he said. That may be because of hereditary disputes, corporate conflicts or a lack of capital management skills from heirs, he added.

If they don't pay attention, Russia may see some "drama in the richest families."