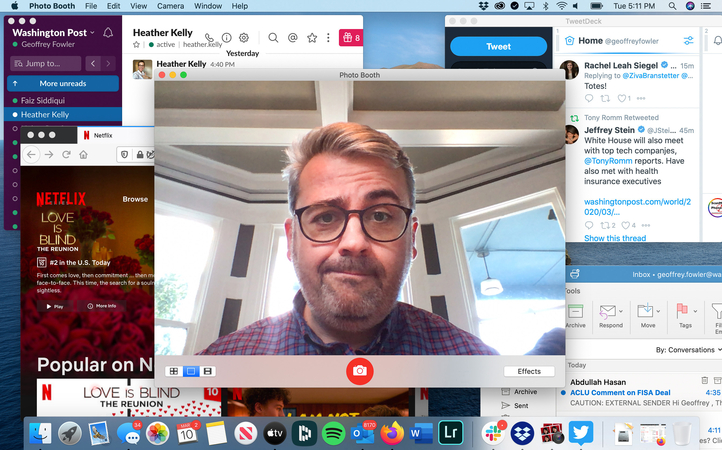 By  The Washington Post · Geoffrey A. Fowler · BUSINESS, TECHNOLOGY, CAREER-WORKPLACE

It's been eight days since I last stepped into the office. Like thousands of other workers in California, I've been doing my job (and staying put) at home to avoid spreading or catching the coronavirus contagion called covid-19

This isn't my first outbreak: Seventeen years ago, I self-quarantined in my Hong Kong apartment for three weeks to avoid the epidemic of severe acute respiratory syndrome, or SARS.

My work-from-home beard is the same. But this time, the Internet has changed everything else.

From my couch, I can have a face-to-face with my boss, who commented on the beard. Just using my phone, I can brainstorm with co-workers. Or get lunch delivered. Or have groceries dropped at my door. Or check out a book from the library. Or join a (virtual) happy hour. Or watch pretty much any movie.

It's a Netflix-and-quarantine life. But it's not particularly chill.

My San Francisco self-quarantine is an experiment to see how far an app-operated life can stretch. The experience is easy, but it hasn't put me at ease. Video conferencing fails 50 percent of the time. The online tools I'm using - Slack, Microsoft Office, Dropbox - treat work as paramount, so it never really goes away. I'm paying double for food delivered by apps. My Apple Watch, which tracks physical activity, beeped with a message: Geoff, you can do better. I turn on my Apple TV, and the outbreak is there, too, pitching "Contagion," the trending movie about dying from a disease spread in part by touching your face. (I indulged the paranoia.)

Then there was the morning my broadband went out.

Quarantine might not seem like a big sacrifice, but my experience shows it's no snow day. It lays bare the vulnerabilities - and the vulnerable - in our online-everything economy.

My online cloister is nowhere close to the nightmare facing the people under medical orders to quarantine or isolate in hotels, nursing homes and cruise ships. To limit the spread of the disease, Microsoft, Twitter and other companies told their employees in early March to start working from home. I followed their lead and self-quarantined to see how it might feel different with all of today's tech. On Tuesday, The Washington Post encouraged employees all over the United States to start working from home if they could.

Even before the coronavirus, there was a name for the Internet's on-demand economy: hermit tech. Or sometimes, assisted living for millennials. "You already live in quarantine," wrote Georgia Institute of Technology professor Ian Bogost last week about apps ranging from Netflix and Instagram to DoorDash and Amazon Prime Now that help people practice the "social distancing" being recommended by some health authorities. (Amazon chief executive Jeff Bezos owns The Washington Post.)

There's not a huge difference between living in a millennial bubble and being cloistered. Over the past week, growth in the use of grocery-delivery service Instacart has surged by 10 times in California and Washington and by 20 times in New York, says spokeswoman Natalia Montalvo. On Instacart, searches for hand sanitizer increased by 23 times.

Now this tech has a more urgent purpose than the luxury of convenience. It makes staying at home possible (and much more palatable) to people who can afford it. For the fortunate, work, shopping and even school can be rerouted through the Internet. But it also bakes in tech-industry assumptions about work happening behind a keyboard, not to mention access to resources and how we interact with others. These apps were designed by engineers with efficiency as the No. 1 goal.

My hermit-tech lifestyle is extreme for the United States because I'm also avoiding leaving my house. But it's not that far off from the new reality elsewhere, now including parts of New York state. In some Chinese cities, people have been in quarantine for over a month and online services are even more advanced. My favorite example: In locked-down Wuhan, teachers use an app called DingTalk to remotely assign homework. So thousands of kids gave it one-star reviews in hopes it would get booted from the App Store.

Depending on the speed covid-19 spreads here, I could be on the leading edge of a great American self-quarantine. That would test many aspects of our government, economy and - closer at hand - personal technology. So it's time to ask: Is the home WiFi ready? And just how much power are we handing over to Silicon Valley's values?

During SARS, when I also worked as a newspaper reporter, I had Internet access in my apartment. But in 2003, working meant going into the office. Texting still required repeatedly tapping on my phone's numerical keypad.

Most of my remote work got done over email. In the month of April 2003 alone, I sent and received over 1,100 emails that contained the word SARS. (I kept the archives.) Going through my inbox required logging into a secure PC.

This time, working from home felt pretty unremarkable . . . at first. I often take calls from home at odd hours, or stay home for a day jamming on a project. Some 43 percent of Americans work from home at least some, according to a 2017 Gallup poll.

I knew my WiFi would hold. I'd previously invested in a mesh router (I recommend Eero). And I was already plugged into work with cloud-connected office tech that I can access on my office laptop, personal iMac, smartphone and tablet, too. I signed up for more Slack messaging channels, so I could better track what everyone was doing.

Not all of it worked as advertised. I know video conferencing has major devotees, but in my experience it has worked about half of the time. My smart Post colleagues dig up amazing scoops but are continually befuddled by Cisco Webex. For some meetings with far-flung people, I'm the only one on video because nobody else could make it work.

Then, at 8:45 a.m. on my third day at home, I had a real jolt: My Internet went down. My heart raced as I ran around the house trying to figure out what happened. I blame my Internet service provider Comcast, though it tells me there were no major outages in my area. The problem fixed itself, but uh-oh: What's going to happen when networks designed for home use suddenly get stressed by millions? Even when you pay extra for faster downloads, with many residential broadband services you are still sharing a limited resource with all your neighbors.

As the days tick by, I've noticed a bigger problem. Without any boundaries between work and life, I just keep working. No screen is an escape. Why, oh why, did I sign up for all those Slack channels? The software just keeps sending me a mountain of information; it doesn't care if I'm actually processing it. I'm part of the problem. I feel guilty WFH, and sending Slack messages at all hours lets me show what a good colleague I am!

There is no technology to replace the intel you get in an office: that someone is on a call, having a bad day, or at home taking care of a sick kid. I can only imagine how these frustrations multiply if you also have kids on coronavirus leave from school bouncing around the house.

Friends and colleagues who work remotely on a regular basis advise a few things no office app is going to do for you: Use a separate, dedicated work device. Have a dedicated work wardrobe - at least different WFH pajamas and sleep pajamas, as Vice noted. And most of all, have clear remote work hours that end with a daily ritual like working out. Or a stiff cocktail.

That's what I had in my supplies, which I didn't venture out to replenish very often, both to respect my boss's marching orders and, to be honest, because I was terrified. During those weeks when the mechanics of SARS remained a mystery, the safe bet was not to trust anyone. There was no Prime, no same-day delivery. If you wanted something, you had to wait a week or put on a mask and go find a store selling it.

Fast forward and my coronavirus self-quarantine has been delicious. I can choose from thousands of restaurants from delivery apps that bring the food right to my door.

But it hasn't been cheap. On my first day at home, a $10.78 Impossible Whopper meal from Burger King ran me a whopping $24.46 through Uber Eats.

One time, I asked the DoorDash driver bringing me Thai takeout if he worried about being out interacting with so many people. His was a tale of two Silicon Valleys: He's doing on-demand work for apps, while his girlfriend, who works for a tech company, has been ordered to work from home indefinitely. "I've got cars and stuff I've got to pay for. So I have to go out and get it," said the driver, who asked not to be named.

"Maybe I'm a little less afraid of it than other people are," he said. "But I know that my immune system is like every other person."

As my colleague Nitasha Tiku has written, the on-demand economy conditions us to not think about why these services are affordable. Gig workers typically don't get paid sick leave or masks and sanitizer as they run around town, though on Monday Instacart and DoorDash announced new sick pay policies for in-store shoppers.

Both DoorDash and Instacart also began promoting "contactless" deliveries - an option for people who order online to say "leave it at my door." To borrow a favorite techie phrase, it's social distancing "as a service."

I lost it around day three during SARS. That's when I emailed my work friend Karen: "I'm getting worried that this is messing with me psychologically. I tried to go to the grocery store about an hour ago, but couldn't make it out the door. I sat down and ate peanut butter instead."

My entertainment options included a small collection of DVDs, terrestrial TV, books and telephone calls. Some friends passed the hours with the help of an Xbox, but I didn't have one.

This time around, I lost it around day five. There's certainly a lot more to keep me entertained: I eat lunch with Twitter, tracking the infected cruise ship docking a few miles away in Oakland. There's a growing list of streaming services that each want $8 to $35 per month to keep me entertained: Apple TV Plus, CBS, Amazon Prime, Hulu, Sling TV and Netflix. By my rough estimate, I've streamed at least 30 hours of TV over eight days.

I checked out an e-book from the library for my book club but can't seem to find the focus to finish it. I've also become a sloth: Normally, I walk 3.9 miles per day, according to my Apple Watch. In the past week, I've averaged less than one mile per day.

A group of tech workers and journalists working at home experimented with a form of virtual socializing on Monday: A 5:00 #WFHHappyHour streamed over Zoom video. Sadly, when I joined few participants seemed to actually have cocktails.

I hit peak anxiety on Saturday night when I sat on my couch with a plate of cookies and streamed the 2011 thriller "Contagion." The Apple TV movie store recommended it to me and, apparently, lots and lots of other Americans, because it's currently the second most popular film in the Warner Bros. catalog, up from 270th last year.

Well, if I wasn't freaked out before, I sure am now. In the film, a disease spreads much like the coronavirus, with health officials reminding people to wash their hands and not touch their faces . . . until it kills off millions and millions of people.

Shortly after I finished the movie, there was a knock at the door. It was my groceries from Instacart. I brought them inside and felt compelled to wipe them all down with antiseptic wipes.

Perhaps I need to try meditating. There are apps for that, too.