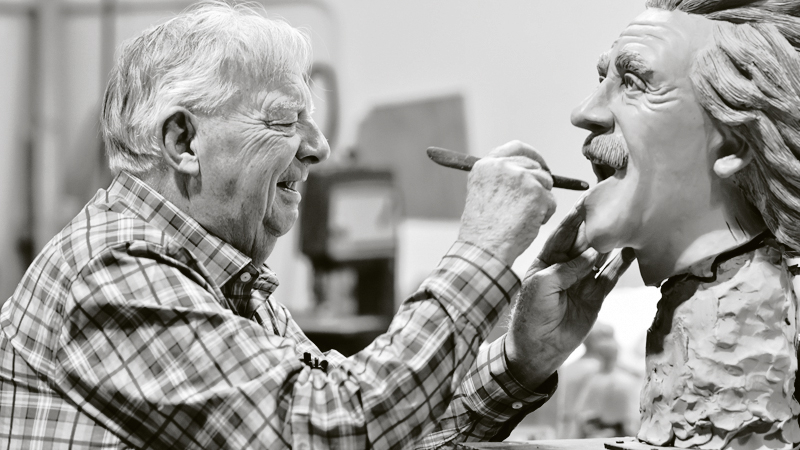 Seward Johnson, a sculptor whose lifelike works have become familiar sights on street corners and in public spaces throughout the country and whose personal wealth, as an heir to the Johnson & Johnson pharmaceutical fortune, enabled him to create a sculpture park and foundry in New Jersey, died March 10 at his home in Key West, Florida. He was 89.

The cause was cancer, said Rhoades Alderson, a family spokesperson.

Johnson came from one of the country's richest families but struggled for years to find his niche in life. He tried working in his family's business, which makes Band-Aids, Tylenol and countless other products, before discovering his vocation through art.

"It all started when my uncle fired me," Johnson told the Star-Ledger newspaper in Newark in 2000. "I'm dyslexic, you know, and there I was, with no university degree, as they say, no where, no way. I had absolutely no idea what to do with myself."

In the late 1960s, he began to focus his energies on sculpture, making hyper-realistic bronze statues, often of enormous scale, that invited people to interact with them. Taxi drivers have been known to stop outside the Four Seasons Hotel in Georgetown, the site of one of Johnson's sculptures of a man hailing a taxi.

Others portray people reading or talking on park benches or are three-dimensional representations of famous works of art, including scenes from impressionist paintings and the photograph of Marilyn Monroe's white dress being blown above her knees.

"No one knows his name, but everyone knows his sculptures," David Levy, the onetime director of Washington's old Corcoran Gallery of Art, told the Chicago Tribune in 2003.

Several of Johnson's works, including portrayals of a skateboarder, a police officer and a woman sketching, have been installed in Washington. One of his best-known pieces, "The Awakening," is now at the National Harbor in Prince George's County. It consists of a gigantic head, arm, hand, knee and foot emerging from the earth. Children often climb on the colossal work.

"Public art has to be accessible," Johnson said in a video made for a 2019 exhibition of his work in Nantucket, Massachusetts. "It also civilizes an area - it 'peoplizes' it, it makes it inviting to the human being . . . It's all interaction, it's 'please touch.' "

Johnson created hundreds of sculptures, yet for many years he was considered a dabbler, a purveyor of kitsch, a rich dilettante who was scorned by critics and the art establishment. He did not have an exhibition in a museum until 2003, when the Corcoran Gallery presented "Beyond the Frame," Johnson's sculptural tableaus based on paintings by Edouard Manet, Pierre-Auguste Renoir, Vincent van Gogh and other impressionist masters.

"Let's not mince words: This show is really, really bad," Washington Post art critic Blake Gopnik wrote. "I can assert with a fair degree of certainty: This is the worst museum exhibition I've ever seen."

Other artists, such as George Segal, Duane Hanson and Jeff Koons, had earned critical praise for their realistic, life-size sculptures, but Johnson was lambasted for being derivative and unoriginal, for having poor technique and "no imaginative component that I can see," as Time magazine critic Robert Hughes put it.

Johnson took the critical brickbats in stride and kept on working. Near his studio in New Jersey, he established the Seward Johnson Atelier, consisting of a school for sculptors and one of the world's leading foundries for casting large-scale works in bronze.

He converted the onetime site of the state fair in Hamilton, New Jersey, into the Grounds for Sculpture, now consisting of 42 acres of outdoor artworks. He exhibited his own sculptures along with those of such acclaimed artists as Segal, Beverly Pepper and Red Grooms.

"Seward is the artist that everybody loves to hate," Corcoran director David Levy told the New York Times in 2002. "But quietly and selflessly, he is an enormously important citizen of art. He's above and beyond patronage. The atelier and Grounds for Sculpture are grand contributions."

Some of Johnson's work has acquired a deeper and more lasting meaning than even he could have imagined. In 1982, he created a sculpture, "Double Check," depicting a businessman looking in his briefcase, which was installed near the World Trade Center in New York.

After the terrorist attacks of Sept. 11, 2001, an estimated $100 million worth of art near the World Trade Center was destroyed. Johnson's "Double Check" survived intact. Firefighters arriving at the scene tried to rescue the seated businessman, covered in debris, before realizing he was made of bronze.

The sculpture became an impromptu memorial, adorned with flowers, balloons and personal notes. It was a symbol not only of the workers who lost their lives that day, but also of a spirit of determination to keep forging ahead through the sorrow.

"Double Check" was reinstalled near the site of the World Trade Center in 2006, still bearing the gouges and scars of 9/11.

"I thought of him as a businessman Everyman - with his briefcase - getting ready for his next appointment," Johnson told the Times in 2005, "and people identified with him. So when he survived, it was as if he was one of them - surviving as well."

John Seward Johnson Jr. was born April 16, 1930, in New Brunswick, New Jersey. His father was on the board of directors of Johnson & Johnson, which was founded in 1886 by three brothers. His mother, a homemaker, was from Bermuda.

In 1932, not long after the young son of aviator Charles Lindbergh was kidnapped and killed, someone tried to break into the Johnson family mansion, presumably in an attempt to kidnap the 2-year-old Johnson or his younger sister.

"My father shot the man in the leg, and he fell off his ladder," Johnson told the Times in 2002. "He was arrested later. But my father became obsessed about security."

Johnson grew up mostly in New Jersey and attended a private school in Connecticut and the University of Maine before serving in the Navy during and after the Korean War. He spent several years working for Johnson & Johnson before being fired in 1962 by his uncle.

After a tumultuous early marriage to Barbara Kline ended in divorce, Johnson married writer Cecelia Joyce Horton in 1964. They began painting together, and she suggested that he take up sculpture because of his mechanical aptitude. His first effort, a nude in a fetal position, won an international award.

"I haven't won a prize since, but I knew what I wanted to do," Johnson told the Star-Ledger in 2000. He went on to sell tens of millions of dollars worth of sculptures, with individual works going for as much as $500,000. In time, some critics were even won over, and his work can be found in private collections and museums all over the world.

"In the corporate world, I wasn't having fun," he said in 2010. "In the world I chose for these last many decades, I am. And what's life without fun?"

In 1971, Johnson's 76-year-old father married his former maid, a 34-year-old Polish immigrant named Barbara "Basia" Piasecka. Weeks before the elder Johnson's death in 1983, he revised his will to leave his entire fortune, worth an estimated $400 million to $600 million, to his wife. His six children were omitted.

As the eldest child, Johnson led a long court fight to contest the inheritance.

"When Basia was asked to come and clean house," he said in 1985, "she took it idiomatically instead of literally."

After three years and $25 million in legal fees, each of the six Johnson children was awarded $6 million, with millions more going to a family-founded oceanographic institute in Florida, which had also been excluded from the will.

Basia Johnson ended up as one of the richest women in the world. She died in Poland in 2013.

In a separate court case resolved in 2001, Johnson's daughter from his first marriage, Jenny Anne "Cookie" Johnson, successfully sued to receive a portion of a multimillion-dollar family trust.

Johnson's survivors include his wife of 55 years, Cecelia Joyce Johnson; their two children, John Seward Johnson III, a founder of the BuzzFeed media website, and India Blake, a poet and photographer; two sisters; a half sister and half brother; and five grandchildren.

Johnson, whose primary home was in Hopewell, New Jersey, continued to make artworks until shortly before his death. The Grounds for Sculpture has become a pilgrimage site for art lovers, and Johnson often led singalongs at a nearby restaurant.

One of his more playful works, which he created near his studio, was a three-dimensional replica of van Gogh's 1889 painting "The Bedroom." It came outfitted with a bed and a drawer that contained Johnson's tap-dancing shoes.