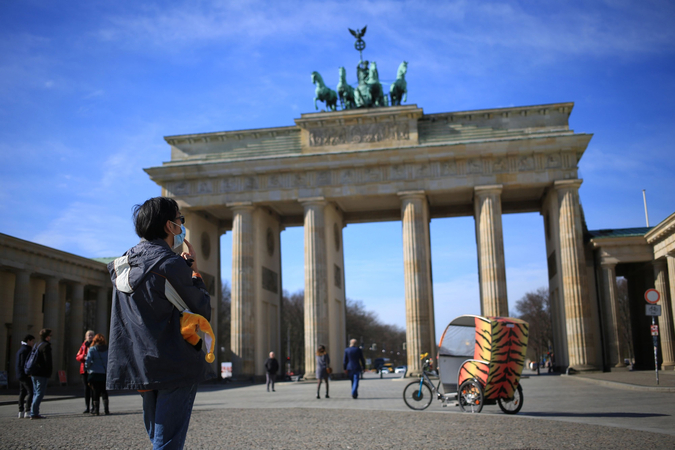 A pedestrian wearing a face mask stands in an almost empty Pariser Platz square beside the Brandenburg Gate monument in Berlin on March 16, 2020. MUST CREDIT: Bloomberg photo by Krisztian Bocsi.

The European Union proposed a temporary halt to non-essential travel in the latest efforts by the trading bloc to suspend the foundations of its community to contain the spread of the deadly coronavirus.

In a memo sent to EU governments, and seen by Bloomberg, the European Commission said the ban on incoming visits to Europe and the restrictions to outgoing travel are aimed at lifting an ever growing number of internal border closings, which have disrupted free movement within the bloc -- one of the key pillars of European integration.

In an unusually blunt admission, the EU's executive arm also warned the travel restrictions may not be effective in slowing the spread of the virus.

A 20-mile (32-kilomter) tailback of trucks on the border between Poland and Lithuania is the latest indicator of how the coronavirus is bogging down Europe's economy. Like most in the 27-nation bloc, Poland is desperate to keep a lid on the outbreak of the disease, but national measures have gummed up supply routes.

Alongside the internal snarls of traffic, there's a similar story on the periphery: Ukraine, which enjoys free trade with the EU, has closed 150 customs checkpoints. Bulgaria says trucks trying to leave for Turkey along a critical transport corridor face "significant" delays. Sea cargo from China is being held for at least 14 days at Romania's Constanta port.

Healthcare professionals, frontier workers, diplomats and persons in need of humanitarian protection are exempt from the proposed travel ban, which is due to last for a month but could be extended further. EU leaders are due to adopt the proposal over a conference call on Tuesday.

Inside the bloc, the economic realities of health-induced lockdowns are starting to sink in.

"As a result of the current global outbreak of coronavirus, supply chains and the global transport and logistics markets are currently seeing a substantial negative impact," DSV Panalpina said in a statement on Monday, when the Denmark-based logistics company withdrew its 2020 outlook.

With operations across Europe that rely on a timely flow of parts, Volkswagen joined peers such as Fiat Chrysler Automobiles and PSA in winding down production at some factories. Restricted access to sites has complicated the movement of parts and finished cars, a spokesman for Wolfsburg, Germany-based VW said.

The world's largest automaker said the consequences of halting output at sites in Spain, Slovakia and Italy are starting to ripple out to other plants including its U.S. factory in Chattanooga, Tennessee. Even countries less affected by the virus are stepping up health checks. VW's plant in Portugal started measuring the temperature of truck drivers at factory gates.

Citing "serious" virus outbreaks near some sites, supply disruptions and a "sudden decline" in auto markets, Peugeot maker PSA said Monday it will gradually close all European production sites this week starting with its facility in Mulhouse, France. The halts will include plants in France, Spain, Germany, the U.K., Poland, Portugal and Slovakia, and will be carried out between March 16 and March 19, according to the statement.

Border closings within the EU disrupt the normally tightly woven links between its members. When Austria closed its border to Italy last week, there were reports of an 80-kilometer backup at the Brenner Pass, a critical artery over the Alps. Efforts to clear the bottleneck -- including opening car lanes for trucks -- appears to have helped, thanks in part to the sharp drop in passenger vehicles making the crossing.

With truck traffic down about 50%, queues have all but disappeared, but some of the issues cropped up elsewhere. At crossings into Germany, there are waits of 1.5 hours near Passau, about 40 minutes in Kufstein-Kiefersfelden and 15 minutes at the Walserberg border near Salzburg, according to the Austrian operator Asfinag.

With travel all but halted, there's a further knock-on effect for the freight market. When a passenger flight gets canceled, so does its cargo capacity, which could increase transport costs and hamper production, according to Paivi Wood, special adviser at the Finnish Chambers of Commerce.

As national governments try to secure their citizens, there are concerns that the measures have gone too far. French Finance Minister Bruno Le Maire urged fellow European leaders to take a united front inside the EU to smooth the difficulties.

"The first reflex is withdrawal, protection. It's also a reflex you have to understand -- everyone protects their population, everyone protects their citizens," he said late Sunday on France 2 television. "It's essential for Europe to be present for solidarity and to say we are putting our means together, we protect our economy and we guarantee solidarity for everyone."

There are some early signs of that the community sentiment is playing out. Near the queue of trucks in the Lithuanian town of Kalvarija, border guards lent devices to test travelers' temperatures to their Polish counterparts, whose equipment was malfunctioning.

But such gestures may be too little, too late to ease the pain for Europe's economy.

VW's management board and top labor leaders have called on workers to prepare for more difficulties ahead, according to a letter to staff seen by Bloomberg.

"The next weeks will be strenuous, maybe hard as well," Chief Executive Officer Herbert Diess and other company officials said in the message.