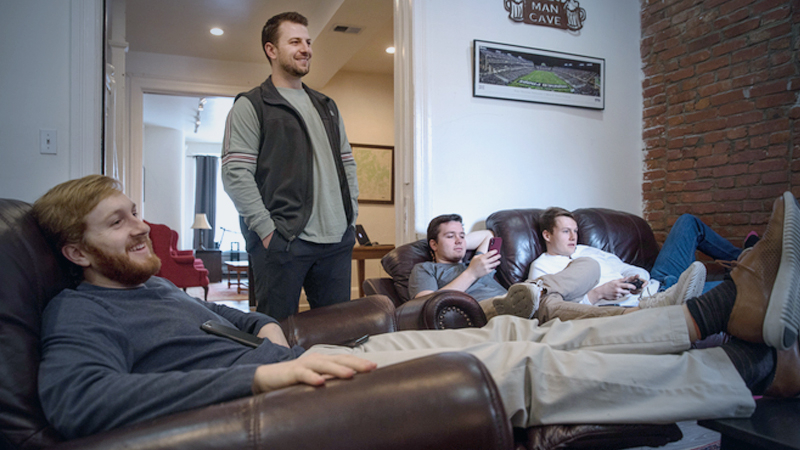 From left, housemates Sam Lane, Zack Johnson, Dutch Seitz and Zach Lane have stocked up on extra food and toilet paper. Seitz is prepared to cede his bedroom to anyone who gets sick. MUST CREDIT: Photo for The Washington Post by Evelyn Hockstein

WASHINGTON - The best room in the four-dude D.C. group house is also the most isolated - up on the third floor, with pine-tree wall art, big windows and its own bathroom and shower. It belongs to Dutch Seitz. But if our current national nightmare infiltrates their home, the 26-year-old is prepared to move a few of his possessions to a small, spare room with an air mattress, allowing his coveted third-floor spot to become the infirmary.

That's the deal he and his housemates made as Washington, along with much of the nation, girds itself for an outbreak: If one of them gets covid-19, the illness caused by the novel coronavirus, Seitz's room is where the sick will go: sealed into the navy-and-white-clad annex without hesitation, with only a mounted stag for company. It's like "The Cask of Amontillado," but with Netflix. 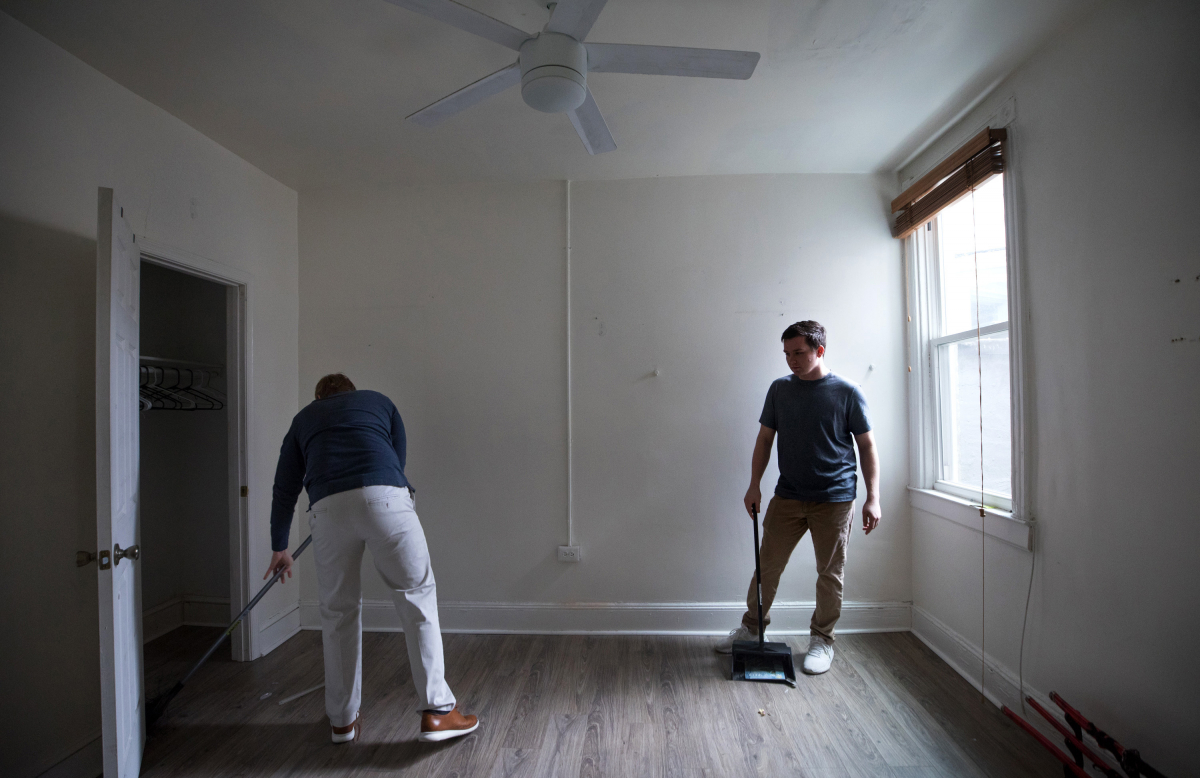 "It's a necessary sacrifice for the greater good," says Seitz. Late last week, even though his housemates were in good health, he packed a bag of about 10 days' worth of clothing to stash in the spare room so he could be ready to move there at a moment's notice.

The designated sick room has its own climate control, so the sick person's air wouldn't recirculate back through the house's HVAC. Between that and the private bathroom, it would be possible, in theory, to cut off contact between the infected housemate and his roommates, who would deliver food and medication outside his door. 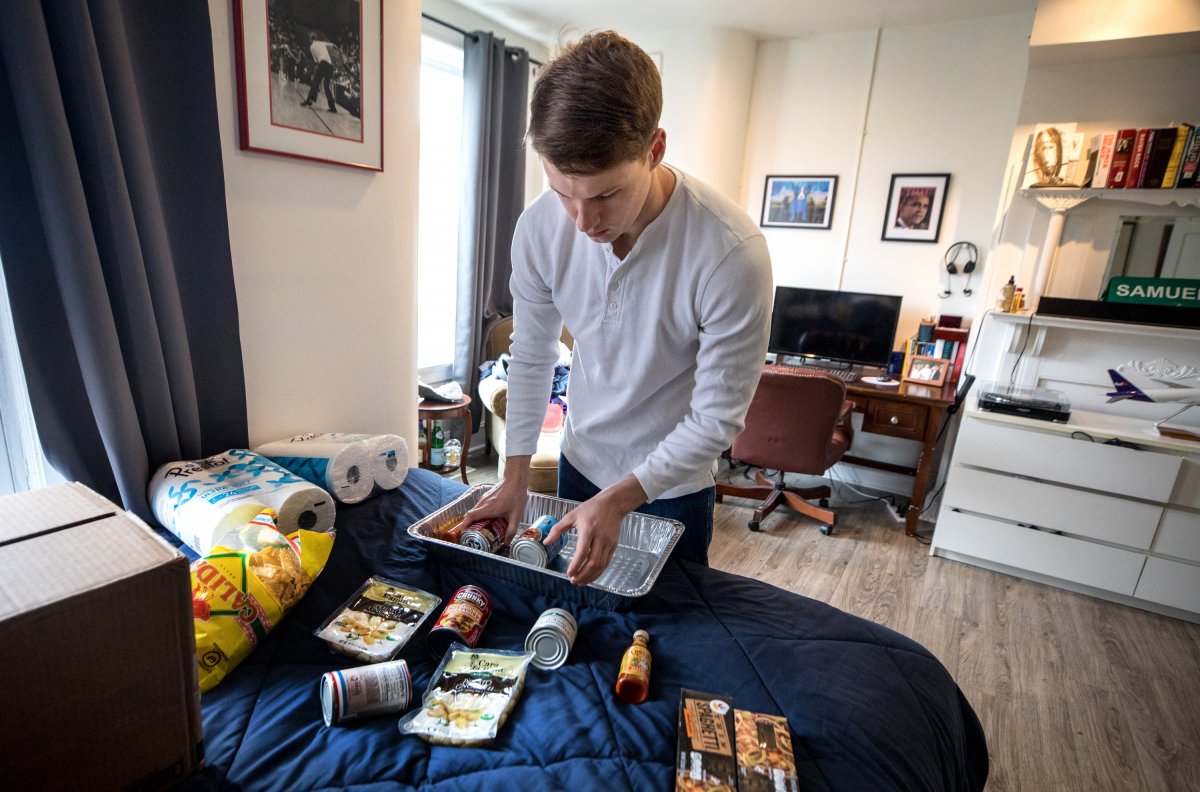 It's what the Centers for Disease Control and Prevention recommends in its guide to caring for a stricken member of your household: "Stay in a specific room" with its own bathroom, "avoid sharing personal household items" and "clean all 'high-touch' surfaces every day."

"The only avenue we haven't addressed is, once that person has healed, how we'd disinfect that room afterward," he says. "It would be the responsibility of the person who was sick," he supposes."I would be following through with a secondary disinfectant after that." (It's all moot if more than one of them gets sick, of course.)

In communal houses across Washington right now, there are group texts and house meetings where discussions of who is responsible for scrubbing the toilet have given way to planning for what will happen if - when, really - the virus strikes. Few of these 20-somethings are worried about the actual symptoms - their demographic has among the best survival rates - but rather, the disruption to their lives and the possibility of transmission. Some of those housemates are longtime friends looking for an extension of college fun, while others are in the unnerving position of having to wait out a deadly global pandemic with a near-stranger from Craigslist. Maybe they are lucky to have each other. Or maybe they should have sprung for the tiny studio apartment instead. Maybe they'll soon find out one way or the other.

"It's easy to feel kind of powerless when you're living with multiple people in a small space," says Magen Eissenstat, a 25-year-old nonprofit worker who lives in a share house. "Your friends kind of become your family, and this has kind of driven that home. It's made it a much bigger deal when you realize that you might be stuck in the house with people."

People living in group houses can socially distance from the world, but not from one another.

"We all live so closely together and we share bathrooms," says Jason Johnson, a 25-year-old Capitol Hill staffer who lives in a group house with three other roommates he found via Craigslist. If one were to get sick, "it's almost inevitable that each of us is going to get the virus."

They haven't done much to prepare for that "inevitable" possibility, either. In Johnson's house, as in many group houses, everyone buys their own groceries, and they take turns buying shared items, like cleaning supplies. And toilet paper. Which, as Johnson just realized, is about to become a big problem.

"We have one six-pack left. I was planning to get some after work," he says. "I guess I need to check Amazon." Good luck, pal. (Yes, Amazon chief executive Jeff Bezos owns The Washington Post, but we're scrambling for toilet paper just like the rest of you.)

"One of our house members bought a lot of food for himself, but that's one out of four of us," says Zach Lane, 24, who lives in the house with Seitz. "We all cook our own food. There's no sharing."

They wouldn't let each other go hungry, of course. Still, an alert went out on the house group text last week: Go to Costco. ASAP.

"I bought food on Sunday for the whole entire week, because I might be working from home, but I don't have weeks or months of food," says Lane. "I'll probably have to go to the store in five days."

Five days. That's a long time to be together, especially for houses with members that - as some note proudly in their Craigslist ads for open rooms - tend to spend almost no time at home. But emergency telework policies have turned housemates into officemates. Officemates who never part ways.

"It might start out kind of as a party, but I feel like we will quickly go into a cabin fever feeling," says Don Masse, 27, who lives in the same house as Johnson. "We're a fairly social and outgoing house."

In Thomas Carpenter's five-person group house, there will be plenty of video-game sessions in the living room. Over at another group house, Shannon McDermott and her housemates are doing group yoga and watching "Cheer," a Netflix series shot in the before times when crowds were benign and colleges had students. At the share house nicknamed "Dolphin House" - it came with three large dolphin emblems surrounding its front door - American University student Ben Davis, 23, plans to hold big group dinners with his housemates, all recent grads except for one new guy who arrived to Dolphin House just as the coronavirus was arriving to most U.S. states.

"We brought in a random person who is a Vanderbilt guy," says Davis. "We've only known him about two weeks now." Based on early observations, he seems like a reliable hand-washer.

Things are a little more tense over at Blaine Smith's group house. The 23-year-old public health researcher has three roommates, but one of them just lost a paid internship thanks to coronavirus shutdowns and can't afford to stay. So they'll need to find a subletter. That means inviting a bunch of strangers over to see the place.

"It is definitely nerve-racking that there are going to be people coming through our house to tour it, and movers," says Smith. The standard D.C. group house interview questions - Are you messy? Do you work long hours? Do you have people over? - may be replaced with more pressing ones, such as: How frequently do you wipe down your doorknobs?

"We just had our March house meeting, where we talked about what we would be doing to keep surfaces a little more clean," says Smith. "We are all adults that are living very different and separate lives," which makes those check-ins more important. "If I lived with my parents ... it would be a bit easier to navigate, because our lives would be a bit more connected."

Cleaning is all anyone can talk about at McDermott's house. Last week, one of the housemates returned from visiting a friend in Spain, which has the fifth-highest total of confirmed coronavirus infections in the world and the second-highest in Europe.

"I personally am kind of spooked by it," says McDermott. At first, the housemates thought they would try to stay six feet away from one another, but they realized doing so probably wouldn't work due to the shared kitchen and bathrooms.

So they're all going to self-quarantine together for two weeks. McDermott canceled her birthday party. The housemates pulled together a good supply of Lysol, hand soap and medicine, and McDermott ordered thermometer probe covers. No one will leave the house, except to go on the porch.

They're not holding it against the housemate, who had left for the trip to Spain before things got bad.

"I'm happy that I live with people," says housemate Amanda Riddle, 24. "I know that it's a little bit scary because you could have multiple exposure points, but I personally am quite extroverted and I like to be around my friends."

But not all of her friends live in her house, so just before her housemate returned, Riddle went on a farewell tour, of sorts: She spent the evening visiting friends at their homes, knowing that she wouldn't be seeing them for two weeks. Then, she made one last trip to the grocery store for essentials: coffee and oat milk, frozen vegetables, pizza dough, cans of tomato soup, sour cream and onion chips, more cheese ("of course"), mint chocolate chip ice cream. And few other items:

"Four bottles of wine," added McDermott. "That's the big one."