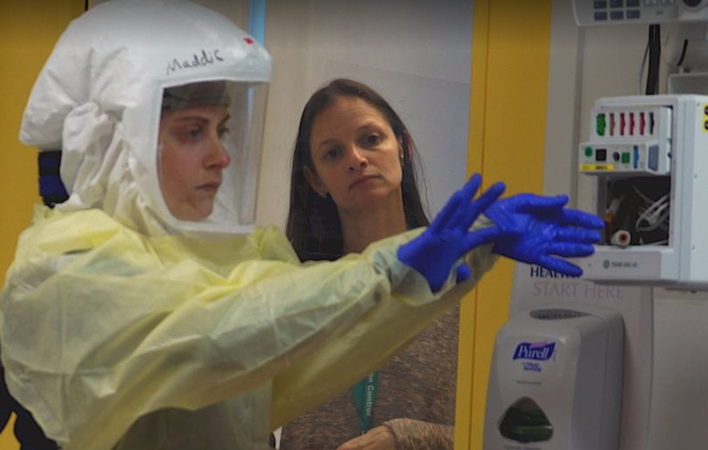 When Jason Christie, chief of pulmonary medicine at Penn Medicine, got projections on how many coronavirus patients might soon be flocking to his Philadelphia hospital, he said he felt physically ill.

"My front-line providers - we were speaking about it in the situation report that night, and their voices cracked," Christie said on Wednesday. They saw how quickly the surge would overwhelm the system, forcing doctors to make impossible choices - which patients would get ventilators and beds, and which would die.

"They were terrified. And that was the best-case scenario."

Experts around the country have been churning out model after model - marshaling every tool from math, medicine, science and history - to try to predict the coming chaos unleashed by the new coronavirus and to make preparations.

At the heart of their algorithms is a scary but empowering truth: What happens next depends largely on us - our government, politicians, health institutions and, in particular, 327 million inhabitants of this country - all making tiny decisions on an daily basis with outsize consequences for our collective future.

In the worst-case scenario, America is on a trajectory toward 1.1 million deaths. That model envisions the sick pouring into hospitals, overwhelming even makeshift beds in parking lot tents. Doctors would have to make agonizing decisions about who gets scarce resources. Shortages of front-line clinicians would worsen as they get infected, some dying alongside their patients. Trust in government, already tenuous, would erode further.

That grim scenario is by no means a foregone conclusion - as demonstrated by the less dire death counts in countries such as Germany that have taken aggressive steps to bolster their health system.

If Americans embrace drastic restrictions and school closures, for instance, we could see a death toll closer to thousands and a national sigh of relief as we prepare for a grueling but surmountable road ahead.

Doing that will require Americans to "flatten the curve" - slowing the spread of the contagion so it doesn't overwhelm a health-care system with finite resources. That phrase has become ubiquitous in our national conversation. But what experts have not always made clear is that by applying all that downward pressure on the curve - by canceling public gatherings, closing schools, quarantining the sick and enforcing social distancing - you elongate the curve, stretching it out over a longer period of time.

Success means a longer - though less catastrophic - fight against the coronavirus. And it is unclear whether Americans - who built this country on ideals of independence and individual rights - would be willing to endure such harsh restrictions on their lives for months, let alone for a year or more.

This month began with U.S. officials recommending actions such as hand-washing and social distancing. By Sunday, the Centers for Disease Control and Prevention was warning against gatherings of 50-plus people. By Monday, President Donald Trump had made an abrupt turn from encouraging Americans to go on with their lives, to urging them to work from home, not meet in groups of more than 10, and calling on local officials to close schools, bars and restaurants. (Getting the public to comply has been alarmingly difficult. Young revelers from Bourbon Street to Miami have ignored those pleas, as have some elderly, who are at highest risk.)

Trump's sudden shift was driven by an alarming new scientific model, developed by British epidemiologists and shared with the White House. The scientists bluntly stated the coronavirus is the most serious respiratory virus threat since the Spanish Flu of 1918. If no action to limit the viral spread were taken, as many as 2.2 million people in the United States could die over the course of the pandemic, according to epidemiologist Neil Ferguson and others at the Imperial College Covid-19 Response Team.

Adopting some mitigation strategies to slow the pandemic - such as isolating those suspected of being infected and social distancing of the elderly - only cuts the death toll in half to 1.1 million, although it would reduce demand for health services by two-thirds.

Only by enacting an entire series of drastic, severe restrictions could America shrink its death toll further, the study found. That strategy would require, at minimum, the nationwide practice of social distancing, home isolation, and school and university closures. Such restrictions would have to be maintained, at least intermittently, until a working vaccine is developed, which could take 12 to 18 months at best.

The report's conclusion: This is "the only viable strategy."

Here is another thing that hasn't been spelled out in our national conversation about flattening the curve: There will probably be more than one curve.

If we're lucky, the coming months will probably look more like string of hilly bumps, say epidemiologists. If authorities ease some measures in coming months or if we start letting them slip ourselves, that hill could easily turn right back into the exponential curve that has cratered Italy's health system and that U.S. officials are desperately trying to avoid replicating.

Climbing this first bump is in many ways the most challenging because it involves persuading people to change their individual behaviors for an abstract larger good - and because no one knows how far we actually are from the peak.

On Tuesday morning, New York Gov. Andrew Cuomo, a Democrat, said infections in his state are expected to peak in 45 days - at the start of May. The state has roughly 53,000 hospital beds, including 3,000 intensive-care beds - way short of the projected need for as many as twice that number of beds and as many as 11 times the number of ICU beds.

A day earlier, Northwell Health - whose 23 hospitals and 800 outpatient centers make up New York's largest health system - canceled all elective surgeries in its hospitals to free up staff and space. It has 5,500 beds.

"We're looking at Italy, which is currently 10 days ahead of us, and what they've had to do," said Maria Carney, Northwell's chief of geriatrics. Carney was health commissioner for New York's Nassau County during the 2009 H1N1 outbreak and has worked furiously on Northwell's plans to prepare for the coming tsunami.

One reason she and others are alarmed: In China, the fatality rate in Wuhan, the raging epicenter, was 5.8%. But in all other areas of the country it was 0.7% - a signal that most deaths were driven by an overwhelmed health system.

And U.S. hospitals are pinched as it is, with some already running at 95% capacity pre-coronavirus, Carney noted. As cases surge, Northwell plans to place multiple beds in single rooms. Its ambulances will also shuttle patients to less crowded satellite sites. Those suffering from ordinary emergencies - strokes, heart attacks, car accidents - may find themselves routed to other facilities away from ERs to avoid transmission.

But it's unclear if it will be anywhere near enough.

Staffing shortages are already developing: As of Tuesday, 18 Northwell employees had already tested positive for the coronavirus. More than 200 were self-quarantined as a result of potential exposures, foreshadowing what is likely to come.

If the numbers next month get truly crazy, cities may look to convert stadiums into isolation wards, as in Wuhan. Cuomo has talked of turning the six-block-long Javits Convention Center on New York City's west side into a medical surge facility. Others might take Italy's approach and split hospitals into those treating coronavirus and those treating all other medical problems, to reduce transmission.

In San Francisco, we may see coronavirus patients put into RVs. In Takoma Park, Maryland, the old Washington Adventist Hospital site, which shuttered in 2019, could suddenly find its doors reopened.

As America enters this utterly unfamiliar territory, some experts have turned to history for glimpses of what to expect in the months ahead.

Initially leery of alarming the public, they have increasingly compared this pandemic to the 1918 Spanish flu, the deadliest in modern history. It infected roughly a third of the world's population and killed at least 50 million people, including at least 675,000 in the United States.

Like the hilly bumps experts foresee in coming months, the 1918 pandemic hit America in three waves - a mild one that spring, the deadliest wave in fall and a final one that winter.

With each wave came a cycle of denial, devastation, community response finally kicking into overdrive - always followed by finger-pointing and blame among leaders and the public.

"Every outbreak is different," said medical anthropologist Monica Schoch-Spana, who spent months digging through archives to study how Spanish flu played out in Baltimore.

Like coronavirus is likely to do, the 1918 flu overwhelmed hospitals. Unable to get help, desperate families waited outside to beg and try to bribe doctors for treatment. In a three-week period, 2,000 died in Baltimore alone. Mortuaries ran out of caskets. When the bodies finally reached cemeteries, the gravediggers were so ill, no one could bury the dead.

Economic pressure on business owners and workers caused public resistance to adopt - and stick with restrictions. The crisis brought out the best in Baltimoreans - with sewing circles churning out gauze masks and hospital bedding, and neighbors donating food and services.

But it also brought out the worst - xenophobic conspiracy theories that nurses of "German extraction" were deliberately infecting people. African American patients were kept out of most hospitals under Jim Crow-era segregation.

"Pandemics aren't just physical," said Schoch-Spana. "They bring with them an almost shadow pandemic of psychological and societal injuries as well."

Stanford virologist Karla Kirkegaard said she has tried to stave off dread from the projected U.S. death toll with a case study she teaches in her classes:

Amid a cholera outbreak in mid-19th century London, as panicked residents fled one hard-hit neighborhood, a doctor named John Snow calmly entered the breach. He deduced that the source of hundreds of deaths was a single contaminated water pump and persuaded authorities to remove the pump's handle - a strategy that ended the outbreak.

Controlling the covid-19 pandemic will take much more than a single water pump, Kirkegaard acknowledged as she sheltered in place at her Bay Area home.

But the story, she said, reminds her how powerful the simple act of one individual can be.