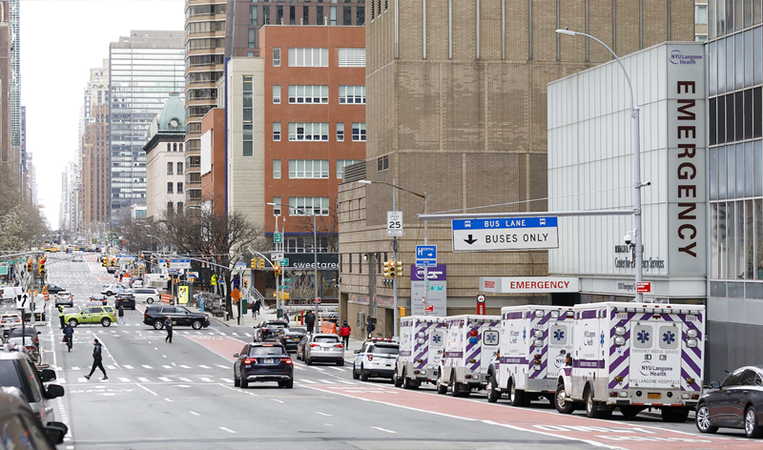 One Seattle-area hospital system has set up its own makeshift assembly line - using parts purchased from Home Depot and craft stores - to create protective face shields for workers. Boston nurses are gathering racquetball glasses to use in place of safety goggles. And in New York, a dialysis center is preparing to use bandannas in place of masks as protection against the novel coronavirus.

Just 11 weeks into a pandemic crisis expected to last months, the nightmare of medical equipment shortages is no longer theoretical. Health-care workers, already uneasy about their risk of infection amid reports of colleagues getting sick and new data showing even relatively young people may become seriously ill, are frustrated and fearful.

"That has really freaked everybody out," said Elissa Perkins, an emergency medicine physician at Boston Medical Center.

President Donald Trump responded to the growing crisis Wednesday by invoking the Defense Production Act to mobilize war-scale manufacturing for critical items, and federal health officials have announced plans to buy 500 million N95 respirators over the next 18 months.

Also, Vice President Mike Pence said legislation signed Wednesday gives manufacturers protection against lawsuits when selling N95 masks to health-care workers, freeing producers such as 3M and Honeywell to sell tens of millions more per month. But it's unclear how long it will take get the equipment to the front lines, and many worry that lives may be lost before such efforts catch up to a virus spreading exponentially across the country.

Few hospitals have experienced a crush of coronavirus patients. But many of the supplies have been used up during routine care over the past few weeks, with no more on the way amid global hoarding and the shutdown of equipment factories in China and elsewhere.

Chief among the concerns is the limited supply of personal protective equipment, especially the fitted face masks known as N95 respirators that are able to filter out extraordinarily small particles like viruses. Guidance from the Centers for Disease Control and Prevention previously called for using N95 masks whenever seeing a patient suspected of having covid-19, the disease caused by the novel coronavirus. But last week, the agency changed course as it became clear that demand for N95s would outstrip the nation's small supply. Now, the CDC says that nurses and doctors only need to wear N95s when performing procedures that might cause the patient to cough or otherwise "aerosolize" the virus, sending it into the air in small particles.

Jordan Asher, a senior vice president at Sentara Healthcare, based in Virginia Beach, said such steps are necessary to stretch out existing stockpiles as long as possible.

"In medicine, we have what is optimal and what is good but still standard of care," he said. Right now, he said, there aren't enough resources to be optimal.

But many health-care professionals wonder whether the looser-fitting surgical masks are adequate. Although the CDC and the World Health Organization have said the virus is not airborne, a paper published in the New England Journal of Medicine this week showed that in laboratory conditions where it is aerosolized - similar to what can happen in a hospital when a patient is intubated - the virus may remain infectious in the air for a half-hour.

More than 85,000 health-care providers have signed a Change.org petition that urges the Trump administration to do more to get the critical supplies. Recommendations, they wrote, "should not be based on what's available; availability should be based on what is necessary."

Health officials said part of the reason for the shortage relates to the expansion of testing. Some testing sites are using excessive numbers of N95 masks, gowns, gloves and eye protection for simple swab tests. Workers decked out in full head-to-toe protective gear may make for dramatic images in news photos and on TV, they said, but it's unnecessary.

The gear "is being wasted testing outpatients," said Demetre Daskalakis, deputy commissioner for the Division of Disease Control at the New York City Health Department.

Darrell Pile, CEO of the Southeast Texas Regional Advisory Council, which is responsible for distributing resources to local health providers from the Strategic National Stockpile, said the amount they had received so far is "horribly inadequate to meet existing demand."

"For those that received them, it might last a week or two," Pile said, noting that some emergency medical services crews and other health providers had run out of gloves as well as N95 masks. He says he has already doled out all the supplies he received Sunday night, "and the requests just keep coming in."

Nisha Mehta, a doctor who runs two Facebook communities for physicians with a total of 65,000 members, said many doctors are frustrated with new procedures put in place to conserve equipment.

"We're normally not supposed to reuse masks from patient to patient," said Mehta, a radiologist in Charlotte, North Carolina. "But a lot of people are posting that they are getting one for the entire day, if they even have one."

Kristin Annis, a 36-year-old nurse anesthetist in Northern Virginia, said she understands the need for adjustments as a result of shortages but is concerned for her in-laws who care for her child. "I'm petrified I'm going to bring it home," she said. "The problem is, this is spreading rapidly. We know we're not near the peak yet. We know some of these patients are going to be bringing it with them even if they don't have symptoms."

Jeffrey Silberzweig, chief medical officer for the Rogosin Institute, which has nine facilities in the New York City area and provides dialysis for 1,400 patients with end-stage kidney disease. He said he has tried everything possible to find more masks, which are used by patients as well as doctors and staff, but will run out of supplies in three to five days. The centers plan to start using face shields along with bandannas as a substitute - a setup recommended by the CDC as "a last resort."

"It is far from ideal but it is better than no solution at all," he said.

Perkins, the emergency medicine physician, said Boston Medical Center still has a six-week supply of N95s, but doctors and nurses have been told they must conserve them by restricting their use to aerosolizing procedures. That leaves health-care workers potentially exposed not only when examining people with flu-like symptoms but also those with completely unrelated symptoms who might nevertheless have the virus, she said.

Asher said he has hope that old-fashioned American ingenuity will help us out of this situation. Wednesday morning, he reviewed draft plans for homemade equipment shared by hospitals on the West Coast, and he has been following the large, open-source efforts by engineers and hackers to create new products to make up for the shortfalls.

"This country has been incredible about producing new equipment in the past . . . I think we need to stay positive," he said.

One of the most creative efforts occurred at Providence St. Joseph Health, which has 51 hospitals in several states. Using a face shield design found online by their top infection control executive, Becca Bartles, and materials that quality control overseer Jennifer Bayersdorfer purchased at retail outlets, they fashioned 500 masks to distribute to doctors and nurses Tuesday night.

Amy Compton-Phillips, chief clinical officer for Providence, said the hospital system has been emailing the design to other health-care centers and ordinary people across the country who want to help:

"I feel like it's a way to knit your socks like in World War II," she said. "Until we can get supply lines up and running, this will be a way for Americans to contribute to the war against covid."