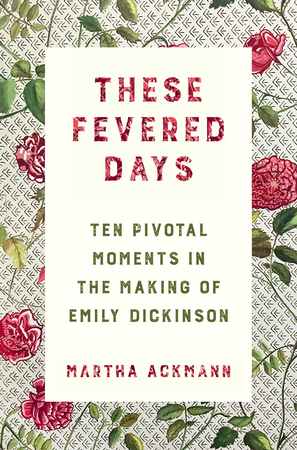 "These Fevered Days: Ten Pivotal Moments in the Making of Emily Dickinson" by Martha Ackmann. MUST CREDIT: Norton

"These Fevered Days: Ten Pivotal Moments in the Making of Emily Dickinson"

Emily Dickinson spent the wildest of her "Wild Nights!" alone in a room with her pens, ink and papers, and over the course of several decades, she secretly produced more than 2,000 deeply personal poems without any specific audience in mind. Yet when the first selected volume of her work was published four years after her death, an audience seemed to be already waiting. Her books have sold briskly ever since. "I'm Nobody!" she wrote in one verse. "Are you - Nobody - too?" Apparently there were a lot of Nobodies, and many were eager to hear the things Dickinson spent a lifetime saying only to herself. It is probably the foremost irony of a life that abounded with ironies.

Dickinson's home was presided over by two emotionally distant parents, and despite sharing a great affection with her friends and siblings (her beloved brother, Austin, and family lived right next door), Dickinson was a deeply reticent personality. She preferred to watch the world of war and commerce pass by her living room window than join in the parade. According to Martha Ackmann - author of the enjoyable and absorbing "These Fevered Days," a top 10 list of Dickinson's "pivotal moments" - the only "acclaim" she received during her lifetime "was winning second prize for her rye and Indian bread at the annual cattle show."

Delivering letters to friends, she abruptly "rang the bell and ran"; she only played piano for visitors if they listened in the next room; and from a young age, she enjoyed Sundays because that was the day her family went to church and left her to her books and pencils. "I am left alone in all my glory," she wrote to a friend. But it was a glory that only Dickinson seemed to appreciate.

Despite her solitary nature, she often reached out for companionship through her letters and, more clandestinely, through the poems she kept hidden away. (When her sister, Vinnie, found them, hand-sewn into batches, or "fascicles," she couldn't bring herself to burn them, as Dickinson had requested.) In her writing, Dickinson often referred to a "thee" that sounded like an imaginary lover ("Might I but moor - Tonight - / In Thee!"), or an ideal reader; but she might just as well have been addressing the most important presence in her life, which was not God (whom she once called "an Eclipse") but rather the cumulate body of her beloved poems. For Dickinson, writing poetry was a form of "singing."

With an odd sense of common words and uncommon metrics, she wove strange, lyrical conundrums of emotion and logic. Dickinson wrote to explore her own deeply idiosyncratic reflections, but when we, her audience, read them, she seems to be speaking directly to us.

Late in life, she developed a long-term relationship with an older man, but even then, the relationship was conducted almost entirely through correspondence. For Dickinson, words and love were part of the same material stuff.

But there is nothing sentimental about Dickinson or her poems. Initially, her verse grabs readers with an almost sing-songy nursery-rhyme cleverness - but it quickly draws them into a sense of perilous dissonance, which strikes from the heart of those bony dashes punctuating almost every line. "Because I could not stop for Death - " one poem begins, just before hitting you with that killer second line: "He kindly stopped for me - ". And there's my personal favorite - and possibly the only poem I was required to read in school that I never got out of my head: "I heard a Fly buzz - when I died - ". In a Dickinson poem, the next logical thought is the one that questions everything you thought before.

There are many monumental biographies of Dickinson (such Richard Sewall's in 1974), and there are many useful, pocket-size quick-study guides. But Ackmann's list aims for the sweet spot in terms of length and depth, and generally hits its target. In fact, Dickinson - a poet of those small, insignificant moments that suddenly blossom into wide, disturbing vistas of significance - fits Ackmann's model neatly.

Sometimes, Ackmann's selected "moments" seem like arbitrary pegs on which to hang a piece of Dickinson's life - such as the summer day of her 14th year when she wrote a letter to a friend, auspiciously concluding, "All things are ready." But others are indisputably important, such as the day she first published a poem in the local newspaper (only a handful of poems were published in her lifetime, and always anonymously) or her first effort to reach out to the writer and abolitionist Thomas Wentworth Higginson after reading in the Atlantic Monthly his essay of advice for young writers. (She must have felt an electric jolt at the passage, "There may be years of crowded passion in a word, and half a life in a sentence.") All her life, Dickinson had sought out a "rare Ear" that could hear the things she wanted to say. And yet over many subsequent years of friendship and correspondence, she rarely took Higginson's advice about how to revise her work or where to publish it.

But then Dickinson was never looking for a mentor. She was only looking for conversation.

Bradfield is the author, most recently, of "Dazzle Resplendent: Adventures of a Misanthropic Dog."