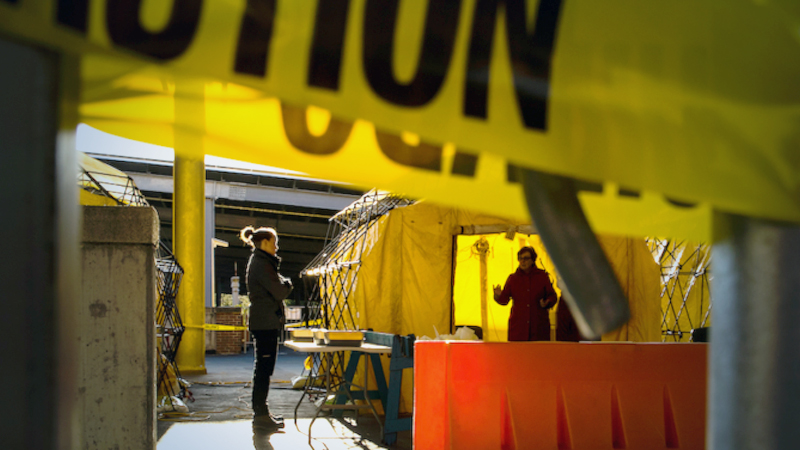 A nurse talks to colleagues outside Newton-Wellesley Hospital in Newton, Massachusetts, before testing people for coronavirus on Wednesday, March 18, 2020. MUST CREDIT: Photo for The Washington Post by Adam Glanzman

Epidemiologists and other scientists seeking to decipher test result patterns and slow the advance of the coronavirus are stumbling over the huge disparities among the ways states administer or report information.

Some states are keeping negative tests secret while others are not. Some track state lab results, while ignoring test results from private companies. Some restrict the availability of tests, while others test widely.

Ohio's ratio seems high because its website stopped reporting negative tests after March 15. So doctors cannot tell whether New York is the epicenter of the disease or whether places such as Ohio are harboring similar numbers of carriers of the virus and have not done enough testing or have not disclosed enough to uncover potential cases. No state has reported fewer positive test results per million residents than Ohio.

"We have no systematic strategy to do the kind of surveillance necessary to understand the chain of transmission," said Harlan Krumholz, a cardiologist at Yale University's school of medicine and an expert on analyzing the outcomes of a broad range of medical treatments. "We're basically flying blind because we have so little idea about its penetration into our society and the number of people affected."

"I think a lot of time people don't realize the importance of negative results," said Justin Lessler, an associate professor of epidemiology at the Johns Hopkins Bloomberg School of Public Health and lead writer on a study estimating the incubation period of the coronavirus.

By including statistics on negative test results, researchers and health officials can tell whether the increasing numbers are a result of an epidemic or indicative of testing expansion.

Melanie Amato, press secretary for the Ohio Department of Health, said last week that the department received four test kits from the Centers for Disease Control and Prevention, each of which can test 300 to 400 people. So far, she said, Ohio has been able to test everyone who meets state guidelines: people who are hospitalized, first responders, health care workers, and those who have been in contact with a confirmed case of the virus.

But those categories do not include everyone who might be infected - and contagious.

Don Williamson, the president of the Alabama Hospital Association and previously the state's health commissioner for more than two decades, said regions where limited testing has happened so far are exactly where capacity should be ramped up, perhaps even more than in places where the outbreak already is widespread.

"If you want to get ahead of the disease, you have to know where the disease is going," Williamson said.

He noted that of Alabama's official count of 81 covid-19 cases, many were not linked to travel, signaling that the disease already is spreading within local communities. Despite that, large swaths of the state have no reported cases. Covid-19 is the disease caused by the novel coronavirus.

"I don't for a minute believe there is no disease in those parts of the state," Williamson said. "We just simply don't have a good handle on how much of the disease is actually out there. . . . It's hard for people to understand why social distancing is so important if there are no cases in your community, if you have no visible evidence there is disease."

Williamson said the state's lab in Montgomery has the ability to process tests from other parts of Alabama, but the challenge has been the same as in so many other corners of the country: a shortage of supplies.

In Alabama's case, he said, that has meant a "consistent and perpetual" shortage of swabs and the materials needed to transport viral specimens safely.

Williamson relayed how state officials in recent days placed an order through commercial suppliers for supplies they desperately needed, only to find the order had been canceled so the products could be diverted to the Strategic National Stockpile.

He said state officials delivered the right messages on social distancing, and Alabama still has an opportunity to bend the curve of infections in the right direction.

"But it would be very helpful to be able to show that progress," he said. "Right now, the longer we go without testing large numbers of people, the less data we have to guide that social distancing. . . . You need to know your starting point."

Texas is another example of statistical uncertainty. The state has over 9 million more residents than New York. But New York has processed seven times as many tests as Texas.

"I think that in Texas it's mostly the availability of tests," said John Henderson, president and chief executive of the Texas Organization of Rural and Community Hospitals. But as commercial enterprises enter the supply chain for tests, that is expected to change soon. New York is a hot spot, he said. Texas is not.

In a group-text conversation Monday, Henderson questioned the need for tests, given how much time has gone by. But rural hospital directors taking part told him their staffs wouldn't be safe without tests.

"They have to know who's positive so they can do a quarantine," Henderson said. "It's less about knowing whether your community has it and more about protecting the front-line staff."