Dan Downs, 71, walks his dog Gracie at his home in Colonial Heights, Virginia, on Sunday, March 22, 2020. MUST CREDIT: Photo for The Washington Post by Julia Rendleman

MIAMI - Isolated in her third-floor apartment, Maria Sweezy knew her coronavirus situation was more precarious than most, but what she saw on her phone Sunday morning left her unsettled and fighting panic.

A woman she had befriended at a camp for children with Type I diabetes was dead - along with her baby. Everyone suspected the coronavirus, which can have more adverse symptoms for diabetics. Messages streamed into Sweezy's phone from people she had met as a camp resident and counselor, some sharing pictures of their friend - including one that included Sweezy, as a dark-haired teenager, grinning. 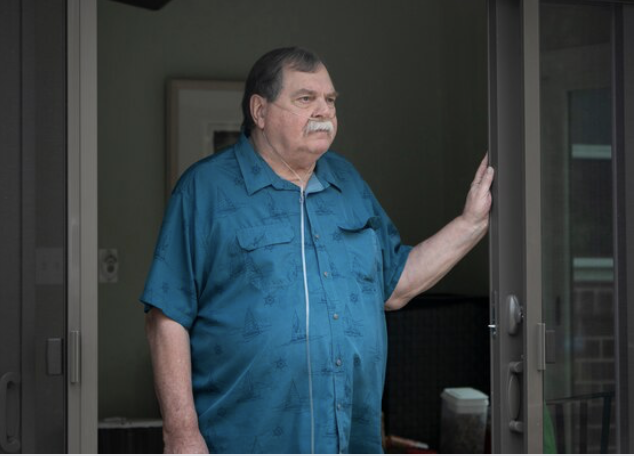 "It was just Wednesday, she was posting about some drama with Amazon," said Sweezy, 24, who just moved from New York to Florida last year. She was aghast that someone her age, from the same area of upstate New York, could have been felled by this disease. "There are pictures of us at the summer camp dance. . . . I'm watching someone who's very much like me - someone in my same situation - die with her baby in her arms. It's so hard to not panic."

Soon after sending her condolences to the woman's family, Sweezy scoured her apartment: washing both sides of her front door and all the metal doorknobs, spraying sanitizer on her debit card, sprinkling peroxide on her toothbrush and dipping her keys in bleach.

She pulled out a calendar and thought about every time she had come into contact with another person, filling in those squares with the word "exposed."

As millions of Americans distance themselves from one another in an attempt to stop the spread of the coronavirus, the struggle is particularly acute for those whose existing ailments can be fatally exacerbated by the disease - people whose lungs have been compromised by pulmonary disorders, whose immune systems have been suppressed by chemotherapy or whose blood sugar spikes dangerously as their bodies fight even common colds.

They have become the most stringent of the social distancers, filling refrigerators and medicine cabinets and hoping that supplies last until the worst is over.

Wary of hospital waiting rooms filled with coughing people, when they get sick, they are turning to self-diagnosis and, at times, simply guessing.

And they clean. A lot.

Dan Downs had planned to spend this week on a cruise ship threading its way through the Hawaiian islands. Instead, he has been fortifying and disinfecting his shrinking world, hoping to avoid the deadly coronavirus at all costs.

The 71-year-old retired educator has chronic obstructive pulmonary disease, which has left him with 50% of his lung capacity and an increased risk of dying of the coronavirus. He spends most of each day tethered to a breathing tube attached to an oxygen concentrator. The most dire coronavirus warnings, he realizes, are aimed directly at him.

"I'm pretty sure if I get this stuff it's going to kill me," he said. "I used to laugh at people who washed their hands after, say, touching a doorknob. Now, it's like everything is radioactive. . . . I hate thinking about dying, but I know I'm in a high-risk group. Double-high risk. Triple."

As the coronavirus ravaged Italy and the first cases cropped up in the United States, Downs and his wife approached life with the compulsiveness of germaphobic doomsday preppers. They stocked up on groceries - using a supermarket service that delivered straight to their car, not risking a trip inside. They arranged to have everything else they and their two Australian shepherds need delivered to their porch in Colonial Heights, Virginia.

They washed their produce in the kitchen sink with soap and water, and scrubbed the containers the other groceries arrived in, letting it all air dry on the front porch. They've revived the ancient art of canning. Perishables that can't be crammed into jars are stuffed into the freezer.

Downs has not read a completely dry newspaper in weeks. Every morning, just after unwrapping it with gloved hands, he blasts it with disinfectant spray.

Even with the extreme antimicrobial measures, he worries about things beyond his control. His home is stocked with medicine and machines to help him breathe. But soon, he believes, a lot more people will need that medicine and those machines. If his oxygen concentrators break or his breathing tubes wear out, will he be able to get replacements? What if the factories that make his medications close because too many people are sick?

"The things that worry me the worst, mostly, is probably catching it," he said. "But after that, supply chain disruptions. I can see, in the foreseeable future, problems up and down the supply chain. Not just my strawberries and my ice cream. Who's going to drive the trucks that deliver the medicine?"

He estimates he has bought his family 90 days in isolation, but has no idea whether that will be enough.

Last week, Lidia Vitale, of Flemington, New Jersey, was certain the pain and swelling in her leg was caused by a blood clot. She'd had them before, and she had been a doctor for decades, before her career was sidelined by two bouts of lung cancer.

The last time she felt the leg pain, in November, she limped to the hospital and got an ultrasound for confirmation. But last week, she weighed a nearly impossible choice: complications from a blood clot or a hospital waiting room that suddenly has been rendered hostile.

She texted her doctor for advice, and he agreed with her worries.

So she went to her medicine cabinet and grabbed some leftover anti-clotting medication, then swallowed a few pills.

Ill strangers at the hospital aren't the only people she has been trying to avoid. Nearly a month ago, her two children went on spring break with her estranged husband. When they came back, both teens had sniffles and her ex had a hacking cough.

"On the one hand, I want to see my kids. I want to be with them," she said. "But am I putting myself more at risk just being near them?"

Instead, she sits in her house alone, trying to stick to a schedule. Her ability to exert herself is already hampered by her compromised lung capacity, but she knows she needs to move to avoid blood clots.

After the doctor sent a new prescription for blood clot medication to her pharmacy, she drove to the pickup window to get the medication.

On the way back, she decided to take one of the biggest risks in several isolated weeks: She went to see her mother.

"I called her and I said, 'Mom, it's so beautiful out. I can't come inside, but we can sit outside.' " she said. "We sat on the porch, six feet away, and had a conversation."