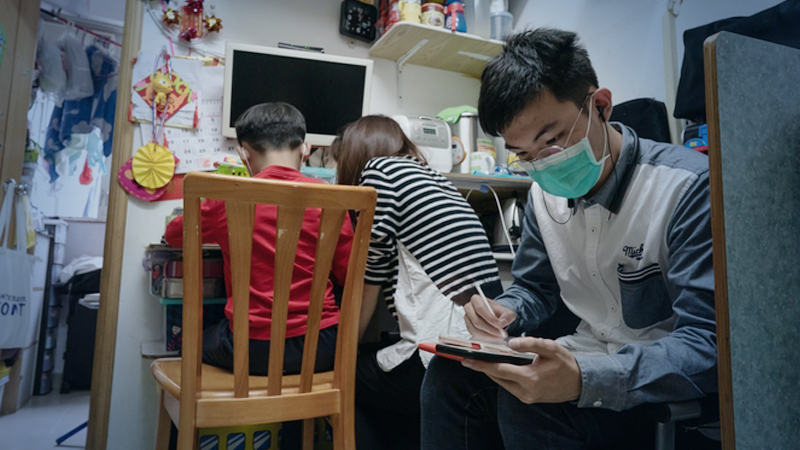 Charles Tang, a 20-year-old medical student, shares a 110-square-foot apartment with his parents and 6-year-old brother. Photo by Anthony Kwan for The Washington Post

HONG KONG - For some, sheltering in place and social distancing mean home workouts in front of large-screen smart televisions, cooking up a storm with groceries ordered online and more time in their backyards.

Elsewhere, it means confining a family of four in a 110-square-foot space while children struggle with e-learning on a poor Internet connection. It means a devastating loss of income for families who now forage through trash, and crippling loneliness for those already on society's fringes.

Barriers have risen around the world as governments sacrifice their economies and free mobility to stave off a pandemic that has already killed some 30,000 people. But as these measures disproportionately affect the poor, doing one's part to fight the coronavirus can mean dramatically different adjustments. Some are struggling to afford their next meal.

The Washington Post spoke to families and individuals in two cities with severe inequality - Hong Kong and Manila - to understand their struggle. Hong Kong in late January asked businesses and schools to shut, forcing millions into shoebox-like living quarters for two months. A new policy limiting opening hours at McDonald's restaurants has also left homeless people who sleep at 24-hour outlets scrambling for an alternative. In the Philippines, President Rodrigo Duterte has enforced a month-long lockdown, shuttering Manila and its surrounding regions, grounding 60 million residents. Many are contract workers in sectors such as sales and construction, with little job security, and now face severe economic loss.

Life for the Tang family had been worsening. The sole breadwinner, Tang Yi Han's husband, is a construction worker, but business had been decreasing since political unrest flared in Hong Kong in June. He declined to give his name or be interviewed.

Things reached a breaking point with the coronavirus. Her husband works only about a day a week, Tang said, earning between $500 and $600 a month. Their monthly rent - for a 110-square-foot subdivided apartment in a dirty walk-up building - is about $900, making their situation untenable.

Charles Tang, their elder son, had been studying medical science in Guangzhou, China, but returned when lessons moved online as the virus spread. Kindergarten classes have been suspended since January for their 6-year-old son, Justin.

"It is hard for them . . . because we don't have a computer, and the Internet cannot support both of them e-learning at the same time," Tang Yi Han said. "We usually go to the library to get their books, but now the library is closed, and we can't afford to buy them."

Unable to afford protective gear and surgical masks, the Tang family stayed inside their home for four weeks when the virus first hit. Justin is active and wants to play, Tang said, but for the most part can't do so in their small space.

"Because we are always at home now, it is so difficult for us to share this space and survive here," she said.

Tang had hoped her children would have a chance for a better life but fears that her circumstances will stymie their education. Without access to learning materials or stable Internet, Tang wonders if they will get left behind, especially as crucial examinations come up for Charles, and primary-school entry exams loom for Justin.

"We already saw problems piling up last year," Tang said. "And now, our landlord wants to kick us out for paying our rent late. We cannot make it through without support." 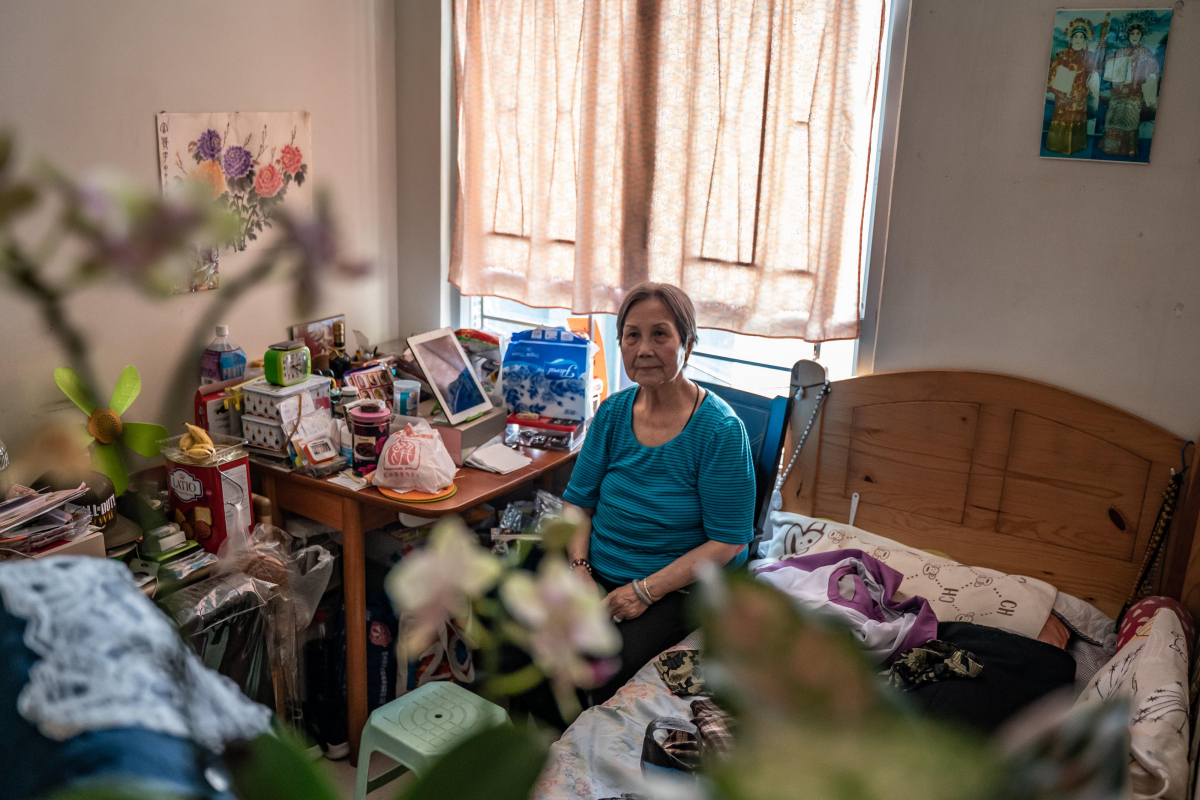 "Maybe having a family is not in my fate," Pang Shuk-chun muses. "My children are grown up and have their own lives. I don't want to bother them."

Pang, who is divorced, lives alone in a public housing estate. She first heard of the novel coronavirus from a neighbor.

Having lived through World War II and the 2003 outbreak of severe acute respiratory syndrome (SARS), she was not too worried at first, and left home without protective gear in mid-January. A passerby urged her to stock up on surgical masks, warning her that her age made her especially vulnerable.

But by the time she tried to search for them, panic buying had begun. Grocery store shelves were empty. Hour-long lines had formed around the few pharmacies that had protective gear. Pang does not have an Internet connection at home and doesn't know how to navigate online shopping.

"I never tried to line up to buy masks, since I had a bad injury in my legs before," she said. "I'm worried that I could get into some kind of accident if I stand in line for too long."

She survived on donations from neighbors and a social worker but felt restricted in her ability to leave her home. The home for the elderly where she volunteers - playing the drum and dancing with her peers, and providing mental-health assistance to those in need - has shut. With groceries and fresh food scarce, Pang survived for weeks on a bag of rice she bought before panic buying kicked in. Vegetables were a luxury every two or three days.

Pang has limited her time outside. She found herself having to reuse surgical masks for days, against the advice of health experts, simply to be able to buy essentials. Some stores and taxis won't let people in without masks.

"Ordinary people like me cannot buy masks. We cannot afford the hand sanitizer, as well. And so we just cannot go outside," she said. "I cannot see any hope right now. It is so hard to know when this will all be over."

Despite severe disabilities that have been with him since birth - cerebral palsy has left him with weak muscles, blindness in one eye and underdeveloped lungs - 33-year-old Jacky Chan had learned to cope. On his motorized wheelchair, he developed a routine that gave him comfort and structure: going to a workshop where he learns to make packaging products, chatting with the other disabled people there on his breaks and volunteering in his free time.

"I am a very positive and outgoing person," he said, struggling through coughs and heavy breaths. "But now, for the first time in the 20 years I've gone there, the workshop is closed."

Chan's problems became more urgent when he couldn't access his long-term asthma medication from a hospital, which cut back on services this year and postponed less-pressing appointments. When the virus gripped Hong Kong in January, he was unable to source surgical masks, and even when he found them, he could not afford them. Chan is supported only by his mother, who is now out of a job, and receives help from a charity, the Direction Association for the Handicapped, where he also volunteers. But charitable contributions from the public have dropped dramatically.

At home, he felt isolated and lonely. His mother also tends to his sick grandmother, and Chan is home alone for up to six hours a day.

"It was very hard for me to make it through," he said, as a surgical mask kept slipping off his face.

Chan has reason to be extra cautious. His lung function is weak, and he suffers from chronic respiratory issues.

"Every day, I wonder if I will be the next case. I am so afraid," he said.

When Manila went on lockdown and suspended public transportation, Cirilo "Liloy" Natorena lost his job as a driver of one of the city's 50,000 jeepneys, colorful public utility vehicles that are a relic of World War II.

He and his three children, and two of their spouses - mall employees who get no pay if they don't work - found themselves unemployed overnight.

They live under one roof in a seaside community south of Manila, where rent is cheap. A village leader left two bags of aid for his household, each containing two pounds of rice, four packs of noodles, four cans of sardines and two face masks. But for a family of 15 - he lives with his wife, six kids and extended relatives - it's hardly enough.

On the day the lockdown was announced, a Monday, Natorena bought 55 pounds of rice. By Saturday, less than seven pounds were left. And with drugstore shelves emptied, the family ran out of rubbing alcohol that Wednesday.

In his job, Natorena made less than $20 a day but was able to help put food on the table. Now, he doesn't know how the family will find their next meal.

Once curfew kicks in at 8 p.m., he said, around 20 armed officers patrol their village. Duterte had deployed the police and military to man checkpoints, telling them they could arrest anybody who disobeyed them.

"How will regular people eat? If they did a lockdown, they should be giving us assistance - like [in] other countries," he said. "If you walk down the street, you'll see fully armed soldiers. If you see the streets in Italy, it's all health workers. Here, it's like people are going to war."

"We're all the same here," Jamaica Rivera, 18, said from her small shack in Taytay, east of Manila. "Some people say, sure, we're saved from the coronavirus, but we're dying of starvation."

Rivera sold cigarettes for a living before the lockdown. Her live-in partner, Reggie Tranya, is a stevedore who hauled rice sacks and earned up to $5 a day.

Their baby, only a year old, had a cough that they had trouble treating. Health centers ran out of medicine and later closed after the lockdown.

They eventually took their baby to a hospital. "They told us to take care and not to go out much," Rivera said.

In her small and tightly packed community, almost everyone had lost their jobs to the lockdown. Rivera rents one of at least 20 makeshift houses on an unoccupied plot of land. She said that her family was unable to claim assistance from the local government because they did not have a residence ID.

"Is limiting [help] to people with IDs right?" said Rivera. "What about those who don't have it? We don't know how to register."

"Nobody will give us help," she added. "The only help we got was from the last election: bread that had almost expired." 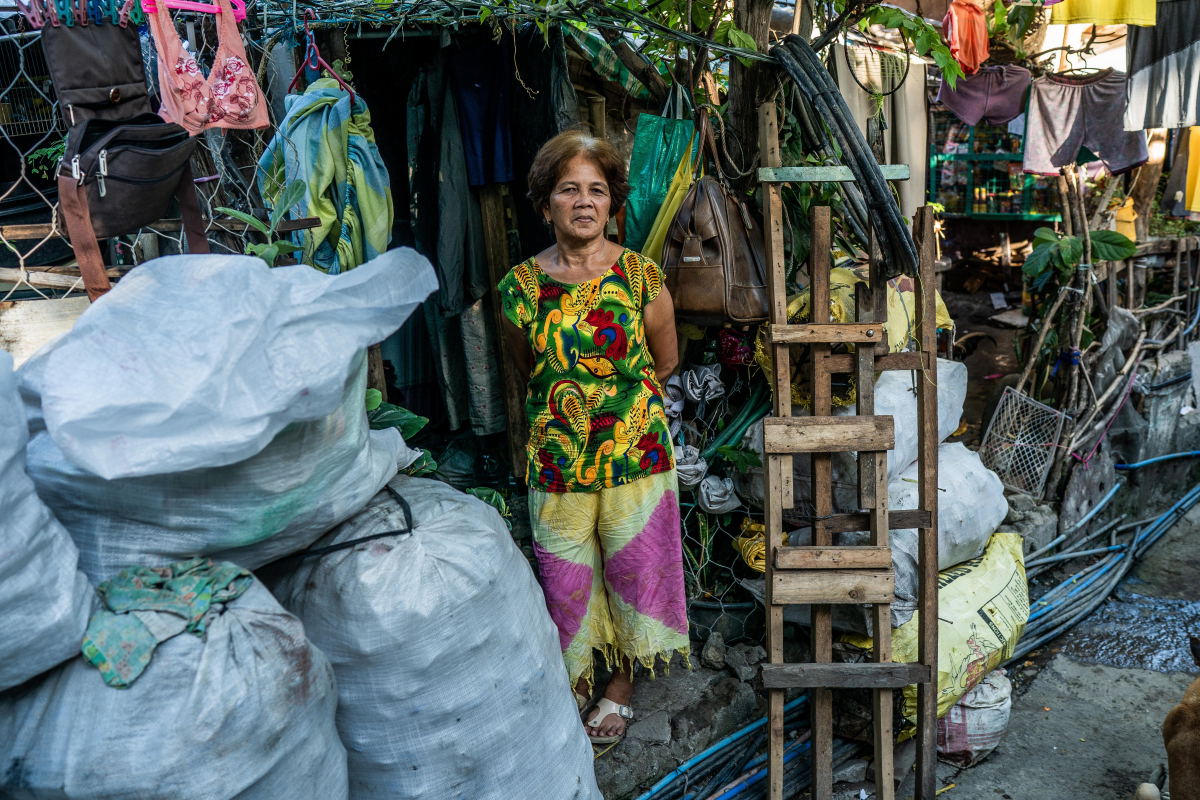 Luisa Cabatuan and her husband, Leonardo, both lost their jobs following the lockdown. She did laundry for another household that closed its doors during quarantine, and he was a construction worker.

Their 23-year-old son also lost his job at a carwash, and their youngest daughter is still in school.

They returned to a job they knew well: scavenging through garbage for items to trade. On the first day of the lockdown, they found that the junk shop was closed; since then, they have been storing what they can find, to sell when establishments reopen.

In the evenings, they see a friend who sells fish and vegetables at the public market - one of the few businesses still allowed to operate. She gives them her leftovers before she closes shop for the day, and they head home before curfew.

"The longer this lasts, we will really have a hard time," she said.

One week into the lockdown, Cabatuan, her husband and a handful of neighbors pore through trash boxes from a drugstore. But there is less garbage as more stores close.

They wear cloth masks but rummage through the trash without gloves. When they get home, they will wash their masks, dry them and spray them with alcohol. They have one bottle of alcohol left, a gift from a priest.

"You can avoid a virus," said Leonardo. "You can't avoid hunger."