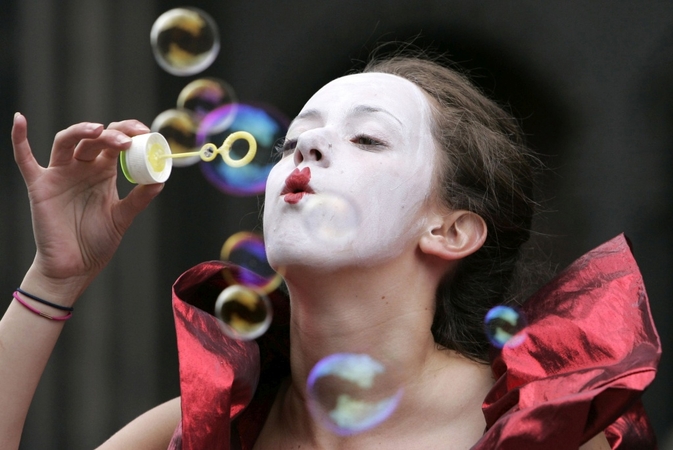 A 2007 file photo from the Edinburgh Festival Fringe. MUST CREDIT: Bloomberg photo by Mike Wilkinson.

The Edinburgh Fringe, which bills itself as the world's largest arts festival, became the latest event to be canceled because of the coronavirus pandemic.

Organizers said in a statement on their website that the gala, due to be held on Aug. 7-31, would not be held. They earlier had postponed the publication of the schedule until July in the hope the situation would improve. Refunds will be offered to participants who had registered.

"Today's decision that the Fringe will not go ahead as planned was not taken lightly," Chief Executive Shona McCarthy said in a statement on Wednesday. "However, in light of present circumstances it was unavoidable."

Together with an international arts festival and a book event the Fringe attracts tens of thousands of people to Scotland's capital, packing everywhere from spare rooms to hotels and restaurants. With its mix of cabaret, dance, comedy and street performers, the Fringe is an annual platform that's launched the careers of many artists. It started in 1947.

Economically, the last official estimate suggested the festivals were worth more than 300 million pounds ($348 million), though a report by the Centre for Economics and Business Research last year said it was more like three times that when income multipliers are taken into account.

Scottish First Minister Nicola Sturgeon said there were 2,310 confirmed Covid-19 cases in Scotland, up from 1,993 a day earlier, with 76 fatalities so far, up from 60 on Tuesday.

Canceling the Edinburgh festivals "is a heartbreaking decision, but the right one," Sturgeon told the Scottish Parliament in Edinburgh. "We will work with the organisers to ensure the festivals return even stronger next year."