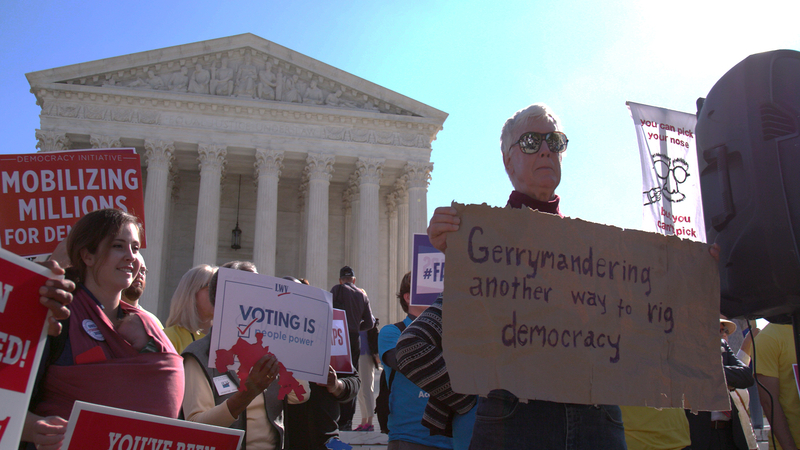 By Ann Hornaday and Michael O'Sullivan With at least 18 states having taken up the issue of gerrymandering in recent years - considering and, in most cases, passing legislation that would combat the partisan redistricting of political maps - the documentary "Slay the Dragon" comes at the peak of a populist wave.

Democratic and Republican voters alike seem to have grown sick of politicians dividing up voting districts in ways designed to favor one faction over the other. (Maps are redrawn every 10 years, at the time of the U.S. Census, typically by the party in power at the time.) In this stirring - and, more importantly for many, motivating - new film by Chris Durrance and Barak Goodman, we follow two such fights. The first takes place in Michigan, where activist Katie Fahey is shown leading the grass-roots anti-gerrymandering group Voters Not Politicians. The second battle takes place in Wisconsin, where a redistricting-reform lawsuit, spearheaded by married attorneys Nick Stephanopoulos and Ruth Greenwood, finds its way to the Supreme Court. You can easily Google the outcome of these stories, but it's well worth watching the film, not just for the way in which Fahey, Stephanopoulos and Greenwood personify the passion of these crusades, but for the way that "Dragon" lays out, lucidly and compellingly, the history and practice of gerrymandering, and the reasons it's worth taking up arms against it. PG-13. Available on demand and various streaming platforms. Contains brief strong language. 101 minutes.

Between Jennifer Kent's "The Babadook" and Julia Ducournau's "Raw," women are proving dab hands at the burgeoning genre of elevated horror. Add one more name to that list: Malgorzata Szumowska, whose moody thriller "The Other Lamb" evokes everything from "Picnic at Hanging Rock" to "Midsommar" and "Martha Marcy May Marlene" in its depiction of ritualized hysteria. Raffey Cassidy delivers an impressive turn as Selah, a teenager born into an all-female cult that worships a leader called Shepherd (Michiel Huisman); as she begins to question her own fealty, she befriends the group's most damaged and disobedient outcast, brilliantly played by Denise Gough. The slowly moving plot and studied mannerisms of "The Other Lamb" aren't terribly arresting or original, but Szumowska suffuses it with high style, tasteful flourishes and a gorgeous gray-and-indigo palette. It's a very pretty picture, even when things get ugly. Unrated. Available on demand and various streaming platforms. Contains nudity, disturbing images, violence and sexuality. 97 minutes.

"Coffee & Kareem," stars Ed Helms and Terrence Little Gardenhigh as the title characters: the first a bumbling Detroit police officer, and the other a foul-mouthed fifth-grader and aspiring rap star who is determined to scuttle a romance between Coffee and his mom, played by Taraji P. Henson. The bad-pun title says it all about a formulaic romp that hits all the expected action-comedy beats, with plenty of obscenity, jokes about police violence and pedophilia and cartoonish violence played for laughs. Betty Gilpin appears in a thankless and utterly unsurprising supporting role. TV-14. Available on Netflix. Contains crude language, slapstick violence and some mature themes. 88 minutes.

- "Almost Love" is a rom-com centering on a gay couple and their friends (Scott Evans, Kate Walsh, Augustus Prew, Michelle Buteau, Colin Donnell, Zoe Chao, Christopher Gray, John Doman and Patricia Clarkson) who are navigating the relationship jungle at the midpoint of marriages and other entanglements. According to the Washington Blade, "The appealing and diverse ensemble cast blends together seamlessly. It's an effective and inclusive combination of veteran character actors, rising stars and fresh new faces." Unrated. Available on demand and various streaming platforms. 92 minutes.

- The TruTV show "Impractical Jokers" featured four lifelong friends from Staten Island who competed to embarrass one another with hidden-camera stunts: Joseph Gatto, James Murray, Brian Quinn and Salvatore Vulcano (collectively known as the improve-comedy troupe the Tenderloins). The feature-length spinoff "Impractical Jokers: The Movie" follows the same basic premise, except that the four middle-aged antiheroes are competing against one another for three coveted tickets to a Paula Abdul concert. In the movie, Quinn proclaims he's having a blast with his buddies, saying: "I'm giggling with my friends. It feels pretty good." According to Variety, "That about sums up the appeal of this group of merry pranksters whose shenanigans, this film proves, are best enjoyed on the small screen." PG-13. Available on various streaming platforms. Contains suggestive content, language, some drug references and brief nudity. 93 minutes.

- The documentary "It Started As a Joke" explores the history of the alt-comedy event known as the Eugene Mirman Comedy Festival (in honor of its founder and curator, best known as the voice of Gene Belcher on "Bob's Burgers.") According to IndieWire, the film - which features interviews with Kristen Schaal, Wyatt Cenac, Ira Glass, Janeane Garofalo, Jim Gaffigan, Mike Birbiglia, Bobcat Goldthwait and others - is "too restless and scattershot to do full justice to any of the comics that it features (delightful as it is to watch the likes of Kumail Nanjiani and John Hodgman palling around backstage). The documentary becomes a much richer portrait when it eventually turns its attention to Mirman himself, and pries its way into his life just enough to use him as a prism." Unrated. Available on demand and various streaming platforms. 76 minutes.