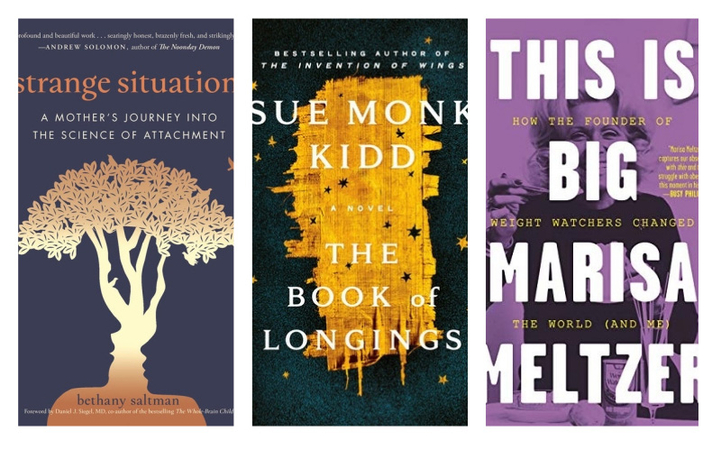 By Special To The Washington Post · Bethanne Patrick · ENTERTAINMENT, BOOKWORLD

We're living through strange times, and if the latest stay-at-home directives don't convince you of that, how about this: People are reading more than usual. They're buying more books than usual. Even if you can't browse your favorite local bookstore, consider supporting them by shopping online for gift certificates while you purchase a few of these titles in digital form.

A new short, lyric novel from the author of "How the Garcia Girls Lost Their Accents" and "In the Time of the Butterflies"? Yes, please, and thank you. Alvarez has her protagonist Antonia (who resembles her creator in age, background and temperament) face several dilemmas at once, including widowhood, a mentally ill sister and an unexpected, pregnant houseguest. You can read it in one afternoon.

Maybe this is the moment to finally write that novel you've always wanted to publish. In that case, Gannon and Larimer, both of whom work full time in the writing and publishing industries, impart what a sustainable writing career entails: networks and skills, not necessarily a swank study. The fact that this is such a lively, informative read means you can trust their expertise.

If you're looking for a transporting historical novel, Tanabe's smart thriller set in 1933 Indochina fits the bill. When an American woman arrives in Saigon, she knows her French husband, heir to the Michelin rubber fortune, plays an important role in the colonial capital. However, she has no idea how corrupt colonial lives can be and discovers she may be a pawn in a friend's hands.

Speaking of transporting historical novels, Zhang's triumph of a debut is a saga about an Asian American family set during our nation's gold rush. Siblings Lucy and Sam, whose Ma is gone, embark on a journey to bury their father; along the way, they encounter Western archetypes, both human and bestial, but these figures hold none of the romance and simplicity that they do in movies or on television.

Many readers understand how a powerful literary voice can change your life. Not many readers can articulate why the way this National Book Award-winning poet does in his new hybrid memoir about Walt Whitman's influence on Doty's life and work. Through close readings of Whitman's poetry, the author delves into his subject's obsessions and epiphanies.

We can't deny it: From Park Avenue to Nob Hill to Peachtree, every city has its "wealthy neighborhood," every enclave its "best street." The opposite is also true - "the wrong side of the tracks," "the slums." Mask, a Harvard-educated attorney, takes what might seem like a slim idea - street addresses - and turns it into a radical treatise on class divisions in a nation that too often insists none exist.

"This Is Big: How the Founder of Weight Watchers Changed the World - And Me," by Marisa Meltzer (April 14)

Jean Nidetch may be one of the most famous people you've never heard of, and that's because the founder of Weight Watchers didn't want to be identified with her groundbreaking program, fearing she would be branded as fat. Meltzer looks at her own pursuit of weight loss and uses it to illuminate our culture's relentless focus on thinness.

Another for fans of historical novels, particularly of, say, "The Red Tent," or, more recently, "Naamah." Kidd turns to Jesus of Nazareth and his disciples, focusing on a young Jewish woman named Ana and her views of the new Christian movement. While the sentences "I am Ana. I was the wife of Jesus" might shock some readers, Kidd uses her unexpected narrator to reveal new perspectives on an endlessly parsed era.

"Strange Situation: A Mother's Journey into the Science of Attachment," by Bethany Saltman (April 21)

When the author gave birth to her daughter, she loved her but didn't bond with her, leading her to wonder: Why does love between parent and child exist? Can it be lessened? Strengthened? In a beautiful but also research-driven book, one woman learns that neither she nor her ability to love is broken. Instead, our assumptions about maternal love need to change.

When a famed photographer dies, leaving behind a vast archive of images, letters and diaries, her son, Theo, hires Kate Aitken to sift through the materials. Kate becomes obsessed with the photographer, even while her attraction to Theo grows. This dark, thoughtful thriller will provide plenty of distraction right now.