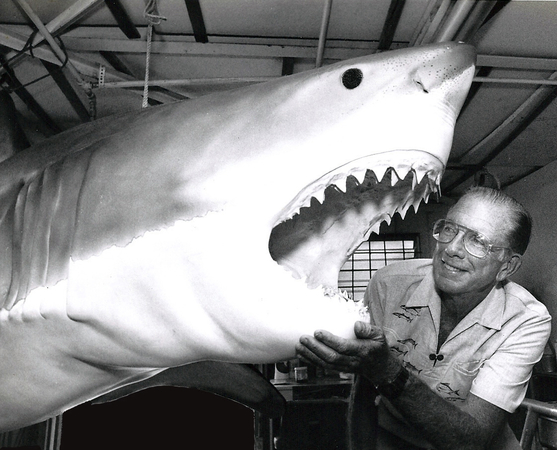 Jack Randall is pictured in 1991 with a model of a white shark at the Taronga Zoo in Sydney. MUST CREDIT: Photo courtesy of the Randall family

Jack Randall, a distinguished ichthyologist and coral specialist who discovered and named more species of fish than anyone in history, died April 26 in his home in Kaneohe, Hawaii. He was 95.

His daughter Lori O'Hara said the cause was presumed to be complications from cancer.

Following the tradition of naturalists such as Carl Linnaeus and Charles Darwin, Dr. Randall spent much of his career classifying organisms, engaging in the laborious and tedious branch of science known as taxonomy.

Based for more than a half-century at the Bernice Pauahi Bishop history and science museum in Honolulu, he spent countless hours poring over the minutiae of fish specimens, from scale counts to body-part measurements, to find the minute details that distinguish different species.

By the time of his death, he had described and named more than 830 fish. That number will rise in the coming years as his colleagues finalize numerous papers still in the works. His well-earned nicknames were "Dr. Fish" or "the Fish Man."

Melanie Ide, president and chief executive of the Bishop Museum, called Randall's contributions immeasurable. Everything in biology, ecology and conservation - even the hunt for blockbuster pharmaceuticals hiding in plain sight in living organisms - all depends on knowing what organisms you're looking at, she said.

Randall's early National Science Foundation-funded work on diet and behavior in Atlantic reef fish - he studied the contents of their stomachs - proved essential to understanding how those ecosystems have changed over time. And his 1958 foundational paper on the causative agent behind ciguatera poisoning, a foodborne illness experienced by tens of thousands of people annually, has been cited hundreds of times by fellow scientists.

Randall published more than 900 papers, wrote more than two dozen books and book chapters and dozens of popular-science articles. He won the highest honors in his profession, including the International Coral Reef Society's Darwin Medal.

It's considered in poor taste for a taxonomist to name a species after themselves, so instead, the genus and species they choose either refer to traits of the organism or to people they think deserve the honor of a creature bearing their name. Because of his standing, Randall has no less than 60 species - and two genera - that reference him.

"Fish everywhere in the world know Jack as one of their own," wrote Sylvia Earle, a preeminent marine biologist, on an online memorial to Randall.

John Ernest Randall Jr. was born in Los Angeles on May 22, 1924. His father, a contractor, hoped to encourage Jack to study architecture. But living near the ocean - and with a mother who took him fishing and with school visits to tide pools - he took an avid and early interest in exploring under the sea more than building on land.

After Army service stateside during World War II in the Medical Administrative Corps, he graduated with a bachelor's degree in zoology from the University of California at Los Angeles in 1950.

The next year, he married Helen Au, and she became his partner in life and science, often helping him on expeditions and preparing manuscripts. In addition to his wife, survivors include two children, four grandchildren and two great-grandchildren.

In 1955, he received a doctorate in ichthyology from the University of Hawaii and held positions at the University of Miami and the University of Puerto Rico before returning to Hawaii in 1965. In 1967, he started working for the Bishop Museum and, though he officially retired in 2009, he continued to describe species as an emeritus senior ichthyologist.

At his death, he was completing a memoir tentatively titled "Fish & Ships: The Life and Discoveries of an Ichthyologist," which included anecdotes about playing tennis with Emperor Akihito of Japan and scuba dives with novelist John Steinbeck.

Randall started diving years before the term "scuba" was coined, and dipped his long johns in latex to stay warm before the invention of neoprene wet suits.

He conducted his last dive in 2014 to celebrate his 90th birthday. At that point, he largely relied on a walker, as the nerves in his legs had begun to fail him. "I can swim better than I can walk," he mused to Hakai Magazine in 2016.