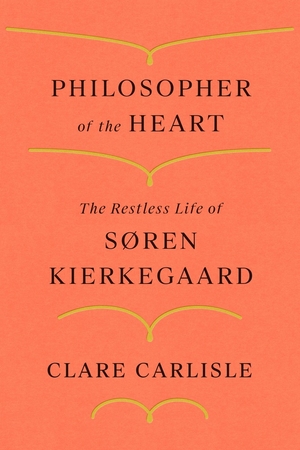 Philosopher of the Heart (Photo by: FarrarStraus and Giroux — handout)

By Special To The Washington Post · Sophie Madeline Dess

Philosopher of the Heart

In his trial before the citizens of Athens, Socrates famously compared himself to a gadfly - a pest, sent by god, perhaps, to "awaken and persuade and reproach" his fellow Athenians so that they did not "spend the rest of [their] lives asleep." If he was a gadfly, then piety, justice and intellectual orthodoxy were his nectar. Into these moral and ethical issues he would bite, until he sucked dry their illogic and laid bare the uncertainty at their base.

More than 21 centuries later, Socrates - or, at least, the Socratic method of laying bare - would come alive again, this time in the form of a brooding Dane, the self-described Socrates of Christendom, Soren Kierkegaard. Clare Carlisle, in her sparkling, penetrative new biography, "Philosopher of the Heart: The Restless Life of Soren Kierkegaard," explains how Kierkegaard ran against the philosophical grain of his time.

She does this in a novel way. In abiding by Kierkegaard's oft-quoted observation - that life must be lived forward, but can only be understood backward - Carlisle abandons standard chronology in favor of a three-part study. Part one begins in 1843, when Kierkegaard had just turned 30; we then move to "Life Understood Backwards," a backward consideration of the years 1848 to 1813, Kierkegaard's birth year. The final section, "Life Lived Forwards," brings us from 1849 to Kierkegaard's death in 1855. With this unconventional structure - a fittingly oblique approach for a famously dialectical man - Carlisle is better able to crack open the philosopher's life: What we get is a panorama of sorts, in which Kierkegaard's obsession with ex-fiancee Regine Olsen (a relationship whose breakdown inspired much of his writing), his preference for coffee (lots, and sugary), his maniacal work ethic, his variously warm and shrewd letters, his thoughts on God and the individual - these parts are rendered as a woven whole.

Carlisle does not sacrifice intellectual rigor for the sake of this larger picture. Her work is demanding in its comprehensiveness. From the beginning, for instance, she sets the broader intellectual scene well: Kierkegaard's 19th-century Copenhagen was steeped deep, like the rest of intellectual Europe, in the thought of Georg Wilhelm Friedrich Hegel. Under Hegel's philosophy, concepts that were largely considered frozen in basic binary forms (master/slave, masculinity/femininity, even living/dying) were freed from their Aristotelian, binary bonds; they were shown to be in a state of dynamic movement. And once these concepts became mobile, it became possible, Hegel thought, to see all of human history as engaged in a massive, if glacial, dialectical progression, whose ultimate end was "freedom." Lofty and forward-looking, Hegel's progressive theories were a perfect match for rapidly industrializing European cities, and they held Kierkegaard's contemporaries in thrall.

But not Kierkegaard, who rebelled against them. Like Socrates exposing the sophists of Athens, Kierkegaard "sought to expose" false teachers of grand schemes, the "pseudo-philosophers." Carlisle reminds us that in "Either/Or," Kierkegaard's first published work, he presents Hegel's thought as "nihilistic" and used the book, in part, to "depose Hegelian philosophy." The main issue was that Hegel's generalizations essentially erased what Kierkegaard considered supreme: the idea of the single individual. Hegelianism holds no space for the individual soul (or for the heart), he felt. The Kierkegaardian "single individual" is not to be confused with the (or seen as the proto-) "me" of "me culture." Rather, Kierkegaard's "single individual" has as its focus the individual's relationship to God and the individual's sense of spiritual fulfillment. This emphasis was emphatic, and unique. As Carlisle notes, it was this focus that would "inspire an entire generation of 'existentialists' to argue that human nature is not a fixed, timeless essence, nor a biological necessity, but a creative task for each individual life."

But how is it that the "Christian writer" Kierkegaard came also to be cited as the "father of existentialism" - a philosophy whose other famous progenitor is Friedrich "God is dead" Nietzsche, and whose intellectual spawn (Sartre, De Beauvoir, Camus) run the theistic gamut? The answer requires us perhaps God-weary modern readers (or at least this God-disinterested Jew) to broaden our vision: Kierkegaard must not be thought of as a pious Christian in the way we think of one today. He was no Bible-thumper and no pompous proselytizer. Just the opposite. In fact, toward the end of his life, Carlisle tells us, Kierkegaard "called on his readers to stop going to church; he no longer went himself, and was often seen in the Athenaeum, a private library, on Sunday mornings." Like Socrates - who proved his own ignorance along with that of his conversational victim - Kierkegaard did not consider it his duty to show fellow citizens the "right way" but rather to disabuse them of their illusion of knowing the right way at all. As he put it, his Socratic task was not to get the masses "to comprehend Christianity, but to comprehend that they cannot comprehend it."

This disabusing required gentle treatment. We see this in Kierkegaard's lifelong use of pseudonyms and a wide variety of writing styles, which, he felt, lent him various portals into his readers' souls. His style is so diverse, in fact, that in characterizing Kierkegaard as a writer it is hard to choose between philosopher, theologian, dramatist, psychoanalyst or something else entirely. Carlisle samples these approaches in her biography, which has the additional effect of showing how Kierkegaard's thought is centered, like that of Socrates, around not-knowing: You cannot know God as a fact, so you must repeatedly readdress your faith in a God whose existence is always uncertain. This continual confronting of the self and God amounts, ultimately, to an existential task.

Carlisle's book is an essential guide to those beginning or reembarking on their Kierkegaard journey. It is perhaps best paired with W.H. Auden's brilliantly selected collection of Kierkegaard's work, "The Living Thoughts of Kierkegaard," which also includes certain gems, such as Kierkegaard's eerie prevision of the Internet era: "There no longer exist human beings: there are no lovers, no thinkers, etc. By means of the press the human race has enveloped itself in an atmospheric what-not of thoughts, feelings, moods; even of resolutions and purposes, all of which are no one's property, since they belong to all and none."

We might replace Kierkegaard's "the press" for the Internet as a whole: One logs on and envelops oneself in a what-not of tweets, memes, Insta-feeds, a mishmash of love/goal/resolution-oriented articles ("Make Her Fall in Love With This Move After You Lose 10 Pounds in 3 Days!"). Today, the sense of living in abstraction is felt keenly. Anyone looking in any real way to become a lover, a thinker or a human being, take heed of Kierkegaard: He will tear you from your illusions, pull you down from your abstractions and then let you find your way.

Dess is a writer and critic living in New York.