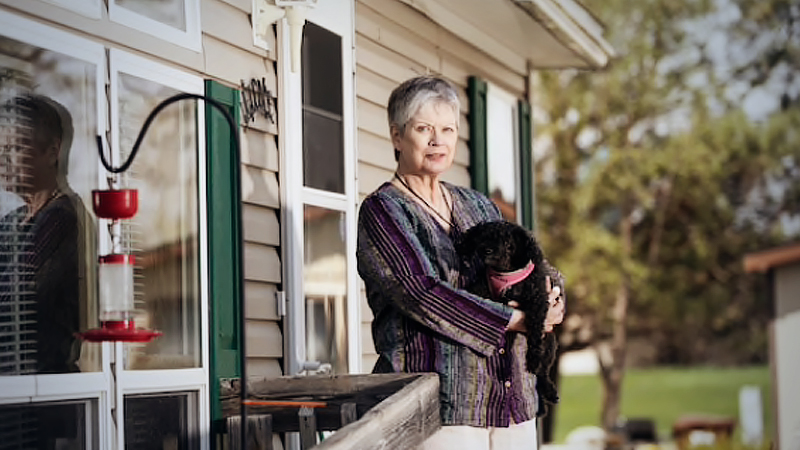 Gloria Jackson at home in Minnesota. She has health conditions that elevate the risk she faces from covid-19. MUST CREDIT: Photo by Jenn Ackerman for The Washington Post

By The Washington Post · As told to Eli Saslow · NATIONAL, HEALTH
Virus-Voices

I try to remember that I'm one of the lucky ones in all this. What do I have to complain about? I'm not dead. I'm not sick. I haven't lost my job or gone broke. I'm bored and I'm lonely, and so what? Who's really going to care about my old-lady problems? Lately, when I see people talking about the elderly, it's mostly about how many of us are dying off and how we're forcing them to shut down the economy.

I tell myself I should be more positive. I should be grateful. Sometimes I can make that last for an hour or two.

A day can drag on forever when you're isolated all by yourself. I sleep as late as I can. I try not to look at the clock. I go on Facebook and read about all the ways this country is going to hell in a handbasket. I turn on the TV to hear a bit of talking. It's been almost seven weeks since I've spent time with a real, live person. I haven't touched or really even looked at anyone, and it's making me start to think recklessly. The other day I went to Walgreens to pick up my medications, and I sat in the parking lot and thought about going inside. I was wearing my mask and I had my inhaler. I wanted run a normal errand, look at the chocolates, maybe find my way into a conversation. But I stayed in the car and went to the drive-through. I put on my gloves and handed my card to the clerk through a hole in the glass window. I took the medicines and gave a little wave.

If I get this virus, I'm afraid it would be the end of me. I'm 75. I've got all I can handle already with my asthma, fibromyalgia and an autoimmune disorder. The best way for me to survive is by sitting in my house for however many weeks or months it's going to take. But how many computer games can you play before you start to lose it? How many mysteries can you read? I realize time is supposed to be precious, especially since mine is short, but right now I'm trying every trick I know to waste time away.

Negative thoughts creep up like that. I start getting crabby. It's waves of anger and depression, and I beat myself up for it. People have it a whole lot worse. Obviously.

I've got two daughters out of town who call me and check in, but I don't want to guilt them. I've got a high school friend who dropped off groceries. I've got a dog and two cats that need to be cared for, which gives me something to do. I've got my own manufactured home with flowers blooming all over the house. A lot of people don't realize there's a big difference between a trailer park and a mobile home community. I've spent hours lately driving up and down every block of this neighborhood, looking at people's yards, checking out whatever might be poking through the dirt. One morning I drove my dog to the river. People were walking on the path, and I was worried about the droplets and all that. We sat in the car and cracked the windows and listened to the water.

It feels like everybody here is trying so hard to be cheerful, but boy does it take an effort. The other day was supposed to be the beginning of baseball season, and I love baseball, and the anchor came onto the local news and said: "Let's all try to look on the bright side! Let's find a way to celebrate opening day even though nobody is playing." He showed pictures of fans wearing their Minnesota Twins T-shirts, or rubbing hand sanitizer onto a baseball to play catch, and I thought: You know what I'd really like to do right now if I'm being honest? I'd like to find a bat and a ball and go break a few windows.

I apologize to God for feeling this way, but he made me how I am. I'm over this whole thing. I used to be an optimist, but I'm not anymore.

I've never been this angry, and it's an ugly way to feel. Maybe when you don't get to see anybody for weeks, emotions get bottled up and have nowhere to go. I get sucked into Facebook, and I keep scrolling down from one thing to the next, yelling at my computer as the posts get more and more insane. Mike Pence was just here in Minnesota, visiting patients at the Mayo Clinic, and he went against their policy and refused to wear a mask. It's like: "Really? How arrogant can you be?" Next it's someone posting pictures of people crowded together like sardines at a beach in California. "You idiots. Do you care about anyone but yourself?" Then it's the president's saying it might be a good idea to inject some kind of bleach or disinfectant. "No thank you, but you go right ahead if you want to poison yourself." Then it's a militia group taking over a state capitol. It's doctors who have to wear garbage bags instead of gowns. It's that we still don't have enough tests. It's how at least most of the deaths are people over 70 with preexisting conditions. "Oh, what a relief! Who cares about them?" It's some stockbroker or whatever saying the elderly are holding this country back from reopening, and maybe it's their patriotic duty to be sacrificed for the sake of the economy. "Sorry to be an inconvenience to your financial portfolio. Sorry I'm still breathing."

It enrages me. I spent my career working for the federal government at Veterans Affairs. I raised my kids by myself. I basically had to raise my ex-husbands. I marched and fought for women's rights. I volunteered for political campaigns. I pay taxes and fly a flag outside my house because I'm a patriot, no matter how far America falls. But now in the eyes of some people, all I am to this country is a liability? I'm expendable? I'm holding us back?

Sometimes, before I know it, I've been writing comments on Facebook posts for hours: "To hell with you then." "You idiot." "How dumb can you be?" "Moron." "Racist." "Selfish pig." "Idiot." "Idiot."

Everyone knows me as a kind person. I used to wear a peace necklace. I've gotten old enough that I just say whatever I think with no filter, but I don't always like what comes out. This isn't how I used to be.

There's a lot I don't recognize about what's happening now. This country is so completely different from the one I came into. My uncle was at the Battle of the Bulge the day I was born. I arrived right near the end of the war, and most of my life was American boom times. We were the leading country in everything when I was young. My dad left for a while to work as a chef on the Alaskan Highway, and he traveled through Canada so we could carve a road 2,000 miles over the Rockies in the dead of winter. We did whatever we wanted just to show that we could. That's how it felt. I graduated from high school and started working when I turned 18, and within about a year I was earning more than my parents. That's how it went. It was up, up, up.

And what are we now? We're mean. We're selfish. We're stubborn and sometimes even incompetent. That's the face we're showing to the world. It seems like some of these other countries almost feel sorry for us. New Zealand and South Korea beat this virus back in a few weeks. We've gone from ten thousand deaths to thirty thousand to sixty-some, so I guess we're still leading the world in that.

We can't get out of our own way. Are we shutting down or opening up? It's the states against the feds. It's conservatives against liberals. There's no leadership and no solidarity, so everybody's doing whatever they want and fighting only for themselves, which means everyone who's vulnerable is losing big. Minorities. Poor people. Sick people. Immigrants. Elderly. We're the ones who will die from this virus and the ones who will never recover. That's the truth I'm learning about this country, even if I should have known it earlier.

I don't like feeling this way. Maybe somewhere in this we'll see a great lightning strike of American ingenuity. I doubt it, but maybe. There's no choice but to be hopeful. I'm staying alive and sitting in my house and waiting. Where else am I going to go? I'll be here.