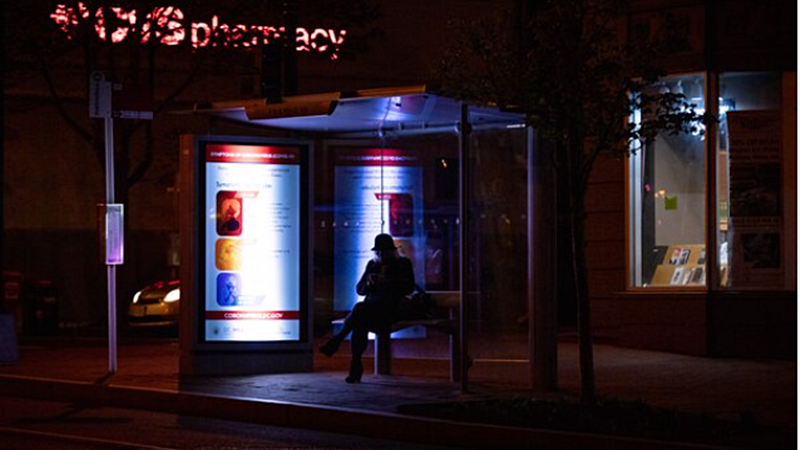 Isolation and economic upheaval caused by the coronavirus pandemic are already resulting in a sharp spike in people seeking mental health help. MUST CREDIT: Photo for The Washington Post by Amanda Andrade-Rhoades

WASHINGTON - Three months into the coronavirus pandemic, America is on the verge of another health crisis, with daily doses of death, isolation and fear generating widespread psychological trauma.

Just as the initial coronavirus outbreak caught hospitals unprepared, the country's mental health system - vastly underfunded, fragmented and difficult to access before the pandemic - is even less prepared to handle this coming surge.

"That's what is keeping me up at night," said Susan Borja, who leads the traumatic stress research program at the National Institute of Mental Health. "I worry about the people the system just won't absorb or won't reach. I worry about the suffering that's going to go untreated on such a large scale."

Data show depression and anxiety are already roiling the nation.

Nearly half of Americans report the coronavirus crisis is harming their mental health, according to a Kaiser Family Foundation poll. A federal emergency hotline for people in emotional distress registered an 891% increase in March compared with the same time last year. Calls and messages to the Substance Abuse and Mental Health Services Administration's hotline grew 338% in March from a month earlier, before state lockdowns began.

"People are really afraid," Talkspace co-founder and CEO Oren Frank said. The increasing demand for services, he said, follows almost exactly the geographic march of the virus across the United States. "What's shocking to me is how little leaders are talking about this. There are no White House briefings about it. There is no plan."

The suicides of two New York health-care workers highlight the risks, especially to those combating the pandemic. Lorna Breen, a top New York emergency room doctor, had spent weeks contending with coronavirus patients flooding her hospital and sometimes dying before they could be removed from ambulances. She had no history of mental illness, her relatives have said in interviews, but struggled increasingly with the emotional weight of the outbreak before she died. Days later, reports emerged that a Bronx EMT also killed himself.

Researchers have created models - based on data collected after natural disasters, terrorist attacks and economic downturns - that show a likely increase in suicides, overdose deaths and substance use disorders.

And yet, out of the trillions of dollars Congress passed in emergency coronavirus funding, only a tiny portion is allocated for mental health. At the same time, therapists have struggled to bring their practices online and to reach vulnerable groups because of restrictions on licensing and reimbursement. Community behavioral health centers - which treat populations most at risk - are struggling to stay financially solvent and have begun closing programs.

"If we don't do something about it now, people are going to be suffering from these mental health impacts for years to come," said Paul Gionfriddo, president of the advocacy group Mental Health America. That could further harm the economy as stress and anxiety become debilitating among workers and strain the medical system as people flock to emergency rooms with panic attacks, overdoses and depression, he said.

Just as the country took drastic steps to prevent hospitals from being overwhelmed by infections, experts say, it needs to brace for the coming wave of behavioral health needs by providing widespread mental health screenings, better access to services through telehealth, and a sizable infusion of federal dollars.

When diseases strike, experts say, they cast a shadow pandemic of psychological and societal injuries. The shadow often trails the disease by weeks, months, even years. And it receives scant attention compared with the physical symptoms, even though it, too, wreaks carnage, devastates families, harms and kills.

Mental health experts are especially worried about the ongoing economic devastation. Research has established a strong link between economic upheaval and suicide and substance use. A study of the Great Recession that began in late 2007 found that for every percentage point increase in the unemployment rate, there was about a 1.6% increase in the suicide rate.

Using such estimations, a Texas nonprofit - Meadows Mental Health Policy Institute - created models that suggest if unemployment amid the coronavirus pandemic ends up rising 5 percentage points to a level similar to the Great Recession, an additional 4,000 people could die from suicide and an additional 5,500 from drug overdoses.

But if unemployment rises by 20 percentage points - to levels recorded during the 1930s Great Depression - suicides could increase by 18,000 and overdose deaths by more than 22,000, according to Meadows.

"These projections are not intended to question the necessity of virus mitigation efforts," cautioned authors of the Meadows report, "but rather to inform health system planning."

Suicide experts and prevention groups have deliberately refrained from discussing too widely death projections such as those from the Meadows Institute. Research has shown reporting excessively or sensationally on suicide can lead to increases in suicide attempts, an effect known as contagion. And the factors involved in any suicide are often complex, they point out.

"Could the numbers go up? Yes, but it isn't inevitable. We know suicide is preventable," said Christine Moutier, chief medical officer for the American Foundation for Suicide Prevention.

Research has shown interventions make a marked difference, such as limiting access to guns and lethal drugs, screening patients for suicidal thoughts, treating underlying mental conditions and ensuring access to therapy and crisis lines to call and text. "That's why we need to act now," Moutier said.

On Wednesday, a coalition representing more than 250 mental health groups announced it was convening a national response to the problem of pandemic suicide - an effort that will include at least one federal agency, the National Institute for Mental Health.

"We're used to dealing with sick people and seeing terrible things, but what's devastating with covid is the sheer volume. It's like drinking from a poisonous fire hydrant," said Flavia Nobay, an emergency room doctor.

With infections soaring in March in New York, Nobay took leave from her duties at the University of Rochester Medical Center to volunteer as an ER doctor in Queens.

Weeks later, the experience haunts her: Watching families crumple in the ambulance bay knowing they may never see relatives again. Hearing the relentless alerts every few minutes of crashing patients and respiratory arrest. Sending patients home because they weren't quite sick enough, knowing they may be coming right back. Or even worse, the chance they may not make it back.

"It chips away at your soul," Nobay said. "You have to hold on to the positive and how you're helping in the ways you can. That hope is like medicine. It's as important and tangible as Tylenol."

A study of 1,257 doctors and nurses in China during that country's coronavirus peak found that half reported depression, 45% anxiety and 34% insomnia.

Pre-pandemic, doctors and nurses were already prone to burnout, research shows, because of the workload, pressure, chaos and increasingly dysfunctional health-care system.

"We're now hitting a period of uncertainty where a lot of people are asking themselves how long they can keep it up," said Liselotte Dyrbye, a Mayo Clinic doctor and leading researcher on burnout. "The teapot can only boil for so long."

This approaching wave of mental injuries will be met in coming months by a severely broken system.

In the United States, 1 in 5 adults endure the consequences of mental illness each year. Yet less than half receive treatment, federal statistics show. As suicide rates have fallen globally, the rate in the United States has climbed every year since 1999, increasing 33% in the past two decades.

In normal times, a heart attack patient rarely has trouble securing a cardiologist, operating table and hospital bed. But patients in mental crisis, studies show, struggle to get their insurance to pay for care. Even with insurance, they struggle to find therapists and psychiatrists willing to take that payment. Those who can afford it often end up paying out of pocket.

Experts warn that such parity and access problems may only worsen with the pandemic, which has upended the functions of hospitals, insurance companies and mental health centers.

In a joint letter Wednesday, leaders in mental health and substance abuse treatment pleaded for the Trump administration's help. The letter - signed by the American Psychological Association, the American Psychiatric Association, the National Alliance on Mental Illness and 12 other organizations - asked federal officials to save community mental health centers facing financial collapse.

The letter also asked the government to lift reimbursement restrictions that have prevented therapists from using phone calls to treat patients. On Thursday, the Trump administration indicated it would do so.

A survey of local mental health and drug addiction centers showed the pandemic has left many on the brink of financial collapse, preventing them from providing services that generate much of their reimbursement revenue. More than 60% said they would run out of funding in less than three months and had already closed some programs.

In a letter to Congress in early April, mental health organizations estimated that $38.5 billion is needed to save treatment providers and centers and that $10 billion more is needed to respond to the coronavirus pandemic. On Friday, the federal substance abuse and mental health agency said it had received less than 1% of the amount advocated by mental health groups - $425 million in emergency funding - and has awarded $375 million to states and local organizations.

While Congress recently authorized $100 billion in emergency funds for hospitals and medical providers, very little will reach mental health and addiction service providers because they mainly receive funding through Medicaid. Most of the emergency money provided by Congress is being distributed through Medicare.

"We are facing the loss of mental health centers and programs at a time when we are going to need them more than ever," said Chuck Ingoglia, president of the National Council for Behavioral Health, which represents 3,326 treatment organizations.

There are glimmers of hope, experts say, amid the gloomy outlook.

The sudden push into telemedicine could make services more accessible in years to come. And the national mental health crisis could spark reforms and movement toward better treatment.

And while almost everyone is experiencing increased stress, the effect for many will be transient - trouble sleeping, shorter fuses.

The difficulty is identifying and treating those who develop deeper, worrisome mental problems such as post-traumatic stress disorder and severe depression.

For years, Gionfriddo's nonprofit has offered questionnaires on its website - widely used in medicine - to help people screen themselves for mental health problems. Since the pandemic began, those daily screenings have jumped 60 to 70%. And since February, the number of people screening positive for moderate to severe anxiety and depression has jumped by an additional 18,000 people compared with January.

Speaking from her parents' home in Pittsburgh, Ananya Cleetus said she has felt the increased strain.

First came the closure of her school, the University of Illinois, bringing to an end her ambitious plans for the semester in computer engineering. Then came the loss of her therapist, forbidden by licensing rules from treating her across state lines. And social media didn't help - all those posts of people baking bread, picking up hobbies and living their best #quarantinelife, making hers feel all the more pitiful.

It was getting harder to even get out of bed, said Cleetus, 23, who has a bipolar disorder and helps lead a student advocacy group.

"It took me a few weeks and talking to friends to finally realize this wasn't just something wrong with me," Cleetus said. Since then, she has poured her energies into creating a daily routine and an online guide for fellow students struggling with the pandemic and mental health.

"This virus is messing with everyone. The anxiety, isolation, uncertainty, lack of structure," she said. "Everyone's struggling with it in one way or another."