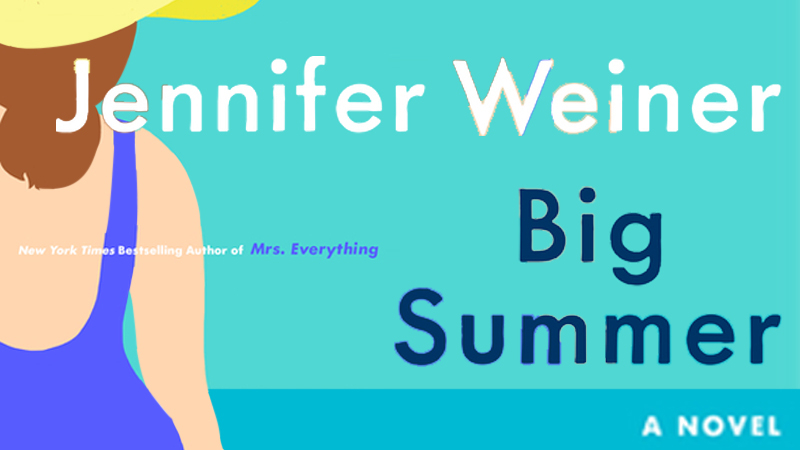 The cover of Jennifer Weiner's new novel, "Big Summer," is already lovely: splashes of turquoise, purple and cornflower blue. But imagine how much more it would pop with an Instagram filter like Mayfair or Lo-Fi, the blue becoming more electric, the purple as juicy as a ripe berry.

That would be but a mirage. As Weiner gracefully reminds, we're all less shiny than our sepia-tinted selfies.

In "Big Summer," Daphne Berg, a not-so-influential plus-size influencer, reconnects with her estranged former best friend, Drue Lathrop Cavanaugh. If you scrolled past Drue on Instagram, you'd be dazzled: good looks, expensive clothes, seductive smile. But lies of omission are standard operating procedure online - and it's easy to gloss over imperfections, especially the invisible kind that fester inside.

The novel, Weiner's 14th, was originally set to publish on May 19, but when the coronavirus pandemic hit, Simon & Schuster bumped up the release by two weeks. The sooner readers had this dose of summer fun in their hands, the better - and it delivers. Weiner takes a breezy romp through online influencer culture, leveling an "I see you" gaze at the Instagram fake-it-till-you-make-it crowd. It's deliciously fun: frothy entertainment with surprising depth.

Years ago, Drue - a familiar high school mean girl - humiliated Daphne at a bar, tricking her into a setup with a man who could barely disguise his disgust. After summoning a rare shot of courage, Daphne stood up for herself and delivered an Oscar-worthy tell-off that would later go viral. Then she fled the scene, as Drue screeched, "You're a fat little nobody. ... You're lucky I ever even talked to you!"

That night, Daphne "decided to stop being a girl on a diet and just start being a girl." First, though, she'd drop "a hundred and seventeen useless pounds" by vowing to never see Drue Lathrop Cavanaugh again. Six years later, Daphne has evolved into a #fiercefatgirl: a 20-something Instagram influencer who's cultivated a following through body acceptance hashtags like #mybodyisnotanapology.

Weiner gets readers invested in the pair's relationship - which is magnetic but unhealthy - through revealing flashbacks. When Drue reenters the picture, begging forgiveness and claiming she's changed, it's with a big ask: She's getting married and needs a bridal party, which is what happens when you make a hobby out of hurting people. Will Daphne be her maid of honor?

Soon, the pair is in picturesque Cape Cod for the society wedding of the summer. Drue is marrying Stuart Lowe, who starred in "All the Single Ladies" - a hilarious spoof of "The Bachelor." The couple outdid themselves soliciting sponsors that wanted to pay to be featured on wedding-related social media posts (hashtagged #drueandstu). At the rehearsal dinner on the beach, for example, guests could recline on a king-size bed outfitted with selfie sticks - and hashtags for the mattress company and linen supplier.

From there, the plot careens into slightly over-the-top whodunit territory, with a splash of steamy romance.

Weiner's appraisal of Instagram culture, and our fixation with likes and followers, will resonate. Even as Daphne enjoys the perks of influencer status - clothing from hip brands, a community of women who make her feel seen - she's alert to its pitfalls. "In space, nobody could hear you scream; on the Internet, nobody could tell if you were lying," she muses, adding that her confidence and self-love weren't totally faked for Instagram - just "considerably amplified." "Even if things don't get better, you can always make them look good on the Internet," she counsels a young friend, which is as 2020 as advice gets.

Of course, Weiner isn't the first to be inspired by our collective fixation with social media. But she stands out as implicitly getting it. Female friendships have always been complicated, in ways echoed and exacerbated by online pressures. When your 60,000 Instagram followers think you're the luckiest girl in the world, that's what you channel, on the Internet and off. When you nurture a certain persona and broadcast it to a rapt audience, it sticks. Glide a thumb over a photo; apply a filter; become untouchable. It breeds an insidious cycle of envy, comparison and impossible standards.

Even with a side of romance and mystery, this is a story about friendship - and the damage we do when we're not authentic with ourselves and each other. "Big Summer" is big fun, and then some. It's empowering and surprising - a reminder to put down the phone and enjoy each moment for what it is, rather than what it could look like on Instagram.