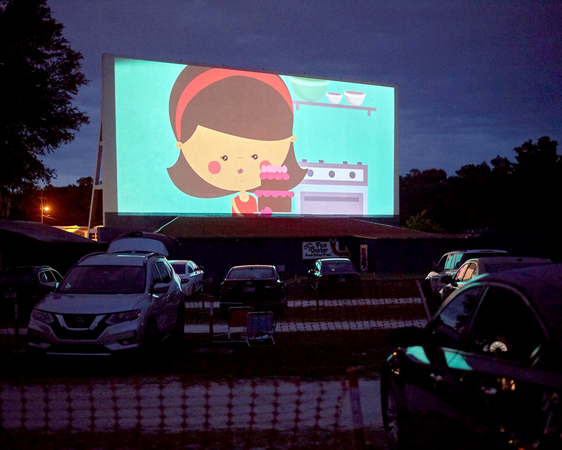 Daniel Fuller inflated a camping mattress, tossed it into the back of his pickup and settled in with his wife to watch "Trolls World Tour" at the Coyote Drive-In in Fort Worth, Texas.

The Friday night show was the first time the 37-year-old had been to a drive-in movie since he was a kid. The couple isn't ready to face the risk of indoor theaters, and the Coyote was one of the few options to get out of the house and break the lockdown routine. So they drove 30 miles to see the animated tale of mythological creatures uniting musical tribes, which played out against the glowing backdrop of Fort Worth's night skyline.

"This is probably our first date night since before the pandemic started in February," said Fuller, who works at the restaurant chain Chili's Grill and Bar. "It's a fun experience. It's different."

"You're safe at a drive-in," said John Watzke, owner of the Ocala Drive-In Theater 80 miles north of Orlando, Florida. If at least one good thing can come out of the deadly pandemic gripping the nation, he says, it might just be the popular rebirth of this particular piece of Americana.

More than 300 drive-in theaters - basically parking lots equipped with a giant outdoor movie screen - are currently in business across the U.S., down from about 4,000 in 1958. With lockdowns beginning to ease across the nation this month, the drive-ins are drawing a whole new corps of customers from the pandemic generation.

Open-air movies were among the first businesses cleared for opening by New York Gov. Andrew Cuomo on Monday. Websites for the theaters promote their outdoor advantage, while stipulating new rules such as wearing masks if you leave your car, tickets that reserve two spaces instead of one, and new apps for ordering concessions from your car.

Cars formed a long line for the May 5 opening of Donna Saunders's Tiffin Drive-In Theater in Ohio.

"Everyone that drove up said, 'We are so happy to get out of our house and have something fun to do,' " said Saunders, who bought the outdoor theater in 2011. "I assume there were smiling faces behind those masks they were wearing - because we were all wearing masks - but everybody seemed to be in a jolly mood."

In Florida, Watzke has been turning away customers on weekends. Even with every-other-space parking cutting capacity in half, he deemed it an "exceptional night" for this time of year.

Watzke made some other adjustments for the pandemic, fencing in a 70-foot walkway at the concession stand and laying light strips to mark six-foot intervals where customers should stand. He's using more to-go packaging and hired extra workers to deliver food to customers who prefer to order over the internet.

For now, Watzke doesn't want to pass along those extra costs to customers, though they trim his profit margin by about 20%.

Another obstacle is the lack of new releases, which studios are withholding until indoor theaters are open. Watzke is showing a mix of older movies, such as "Wonder Woman," and independent films, including IFC's "How to Build a Girl" and "The Wretched." A few weekends ago, he screened Harry Potter movies.

"I don't think people care as much about what they're coming to see,'' he said. "They just want to get out of their house.''

All three screens at the Coyote Drive-In were sold out Friday night as Texans seized the chance to get out of their homes. Maribel Rodriguez, 45, loaded up her three kids to see "Trolls World Tour" after spending weeks confined to their house. She wasn't sure how her children would react, but she thinks the drive-in made some new fans.

"I think we will come out more often," she said. "It brings us all together as a family."

The renaissance for drive-ins should last at least through the summer, said Chris Aronson, president of domestic distribution at Paramount, a unit of ViacomCBS Inc. The outdoor venues will have almost a monopoly on moviegoing at least through June, as most indoor theaters remain closed and customers seek alternatives to closed spaces.

"I think people are going to be very comfortable with outdoor, out-of-home entertainment," Aronson said.

Proprietors are hoping their new customers will stay loyal even after virus risks ease.

If so, it will be another evolution for a peculiarly American tradition.

The nation, with its wide-open spaces and devotion to the automobile, has always been an innovator in devising things that can be done without leaving the car. America gave the world drive-thru windows, which dispense about two-thirds of fast food in the U.S., and the drive-thru pharmacy. In Louisiana you can get a drive-thru daiquiri and Arlington, Texas, once had a drive-thru pawnshop.

Drive-ins boomed during the 1950s and 1960s as a nighttime hangout - and make-out - spot for teenagers and a cheap option for families who paid by the car instead of per person. They got two movies for the price of one if they stayed for the double-feature.

As air-conditioned, indoor multiplexes showing movies throughout the day took over the market in the 1970s and 1980s, drive-ins began to fade. The industry took another hit in 2013 when studios switched to digital, forcing drive-ins to buy new $75,000 projectors for each screen.

Now the pandemic is redefining the drive-in as a community gathering place. The natural social-distancing available in the large parking lots has made them useful for other events besides movies, including church services and graduation ceremonies.

The Sandell Drive-In in Clarendon, Texas, outside Amarillo has been repurposed as a drive-in church by a minister, who stands before the big screen with a microphone to preach to parishioners parked in front of him. In a video livestreamed on Facebook, horns honked enthusiastically to punctuate the sermon instead of the usual "Amen!"

John Knepp in Ohio has booked more than 20 high-school graduation events at his Mayfield Road and Midway Twin drive-ins. The schools will screen a 90-minute video of students receiving their diplomas.

"They'll see themselves on the big screen," Knepp said, and then they'll watch old movies.

Josh Frank, owner of Austin's Blue Starlite Mini Urban Drive-In, had already begun reimagining the modern outdoor theater before the pandemic hit. His concept for a smaller-footprint, pop-up style drive-in allows him to operate in the city. He keeps costs low with a Blu-ray projector and by showing cheaper "comfort food classics," such as "Raiders of the Lost Ark" and "The Goonies."

The theater had a hipness factor that made it a hot ticket among Austinites, and he opened a second location at the end of February. Both are now reopened for business after locking down for a few weeks.

"People are just so grateful that's there's a business model for having a cinematic experience that not only is so different from any other, but is literally the safest thing you can go to do right now," he said.