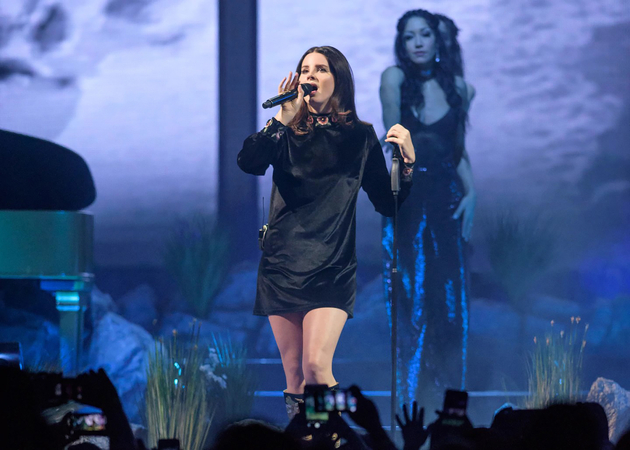 Lana Del Rey announces a new album, but nobody is talking about it

In a dramatic instance of burying the lede, Lana Del Rey announced an upcoming album in the wee hours of Thursday morning by uploading to Instagram a lengthy preamble in which she lashed out at critics who have allegedly accused her of "glamorizing abuse" through her music.

"Doja Cat, Ariana (Grande), Camila (Cabello), Cardi B, Kehlani and Nicki Minaj and Beyoncé have had number ones with songs about being sexy, wearing no clothes ... cheating etc," the Grammy-nominated singer-songwriter wrote. "Im fed up with female writers and alt singers saying that I glamorize abuse when in reality I'm just a glamorous person singing about the realities of what we are all now seeing are very prevalent emotionally abusive relationships all over the world."

Backlash to Del Rey's post arrived swiftly. Without denying that double standards exist within the music industry, critics found fault with her decision to name a largely black roster of female artists before stating that "there has to be a place in feminism for women who look and act like me." Pieced together, her claims seemed to insinuate that these artists hadn't faced the same level of criticism in their careers.

"Lana Del Rey really threw a bunch of black women under the bus before saying that feminism needs to accommodate women like her," writer Zito Madu tweeted. "It's art."

Without naming the singer, writer Fariha Róisín tweeted, "thinking about how white women seem to be not as threatened or enraged by gatekeepers, or successful white men, or the countless disparities of capitalism - but by successful black and brown women that they really want to bring down, humiliate and dismiss."

Del Rey addressed the backlash in the comments section of her post Thursday evening, writing that it "is sad to make it about a WOC (woman of color) issue when I'm talking about my favorite singers."

"And this is the problem with society today, not everything is about whatever you want it to be. It's exactly the point of my post - there are certain women that culture doesn't want to have a voice it may not have to do with race I don't know what it has to do with," she continued, adding in another comment: "when I said people who look like me - I meant the people who don't look strong or necessarily smart, or like they're in control etc. it's about advocating for a more delicate personality, not for white woman - thanks for the Karen comments tho. V helpful."

Themes of abuse are woven throughout Del Rey's work, most notably in the title track of her 2014 album "Ultraviolence," which references the Crystals' 1962 single "He Hit Me (and It Felt Like a Kiss)" in the chorus. (The album title could also be interpreted as a reference to Anthony Burgess's 1962 novel "A Clockwork Orange," in which "ultraviolence" is a term that refers to unprovoked, brutal violence.) Some critics at the time did express concerns over Del Rey's handling of abuse: Time magazine, for instance, wondered whether the song glorified domestic violence and quoted a 2013 Fader interview in which pop singer Lorde referred to Del Rey's previous record as "so unhealthy for young girls to be listening to."

In her Instagram post, Del Rey wrote that this assessment characterized reviews of her work "up until recently," a reference to the critical success of last year's "Norman F------ Rockwell." But she still found fault with the coverage of that album, and stirred controversy by publicly refuting NPR writer Ann Powers' claim - in a largely positive review - that Del Rey adopts a persona in her music.

"Here's a little sidenote on your piece - I don't even relate to one observation you made about the music," Del Rey wrote in response to Powers tweeting the review. "There's nothing uncooked about me. To write about me is nothing like it is to be with me. Never had a persona. Never needed one. Never will."

The tweet sparked conversations on social media about the purpose of music criticism, and who it serves. Powers, for her part, told the Los Angeles Times she respected Del Rey, and that "it is a critic's responsibility to be thoughtful and honest to herself in responding to artists' work, and an artist's prerogative to disagree with that response."

Perhaps Del Rey will feel differently toward reviews of her upcoming album, due for a Sept. 5 release. She concluded her Instagram post by stating that it would include "tinges of what I've been pondering."