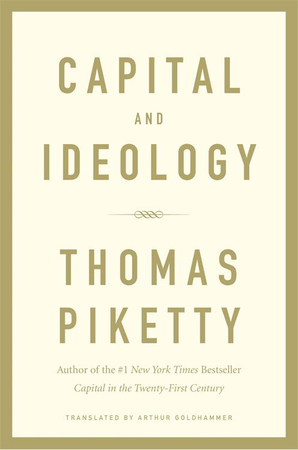 By Special To The Washington Post · James Kwak · ENTERTAINMENT, BOOKWORLD

The Democratic Party is the most important political party in the world today. It is the only organization in a position to defend what was once the world's flagship democracy and economic power from a president who has re-engineered his own party to justify racism, misogyny and xenophobia. Yet the party of the donkey is hardly up to the task. Over the past decade, as Republicans have further embraced an ideology of resentment unmoored by facts, Democrats have lost hundreds of seats in state legislatures, 22 seats in the House of Representatives and control of the Senate - while losing the White House to the most toxic candidate in history.

In his new book, "Capital and Ideology," economist Thomas Piketty explains why. The Democratic Party - like left-leaning parties throughout the world - failed to come up with a compelling response to the global conservative resurgence of the 1980s. Like New Labour in Britain and the Socialist Party in France, it abandoned the working-class voters who were once its base: "Improving the lot of the disadvantaged ceased to be its main focus. Instead, it turned its attention primarily to serving the interests of the winners in the educational competition." By 2016, according to the post-election surveys that Piketty analyzes in depth and across several countries, the Democrats were the party of not just the highly educated but even the highly paid.

The Western world stands at a crossroads. For most of the past century, politics in prosperous democracies was primarily oriented by the division between rich and poor. Today, that axis is being overshadowed by clashes over national or ethnic identity, between anti-immigrant nativists and pro-immigrant cosmopolitans. Examining the data over several countries and decades, Piketty identifies the turn toward identitarian politics as a direct consequence of the left-wing parties' conversion to market capitalism: "The disadvantaged classes felt abandoned by the social-democratic parties (in the broadest sense) and this sense of abandonment provided fertile ground for anti-immigrant rhetoric and nativist ideologies to take root."

But the future is not preordained. Piketty's earlier blockbuster, "Capital in the Twenty-First Century," was best known for its claim that r > g: that the rate of return on investments (r), in most periods of history, is higher than the rate of economic growth (g), and the very rich will become inexorably richer - as has indeed been occurring for most of our lifetimes. One of the most trenchant critiques of that book was that r > g is not an ineluctable law of nature but a result of specific economic and political institutions. Change the institutions, and the course of history changes.

"Capital and Ideology" is Piketty's response. The book is both a history of the world and a theory of history. Every society is unequal, and therefore constitutes an "inequality regime" maintained not solely by force but also by ideology: "Each inequality regime is associated with a corresponding theory of justice. Inequalities need to be justified; they must rest on a plausible, coherent vision of an ideal social and political organization." Most of the book is a history of how those ideologies have helped bolster social structures characterized by extreme inequality, from feudal and slave societies through colonial regimes to the hypercapitalist world of today.

Where Marx consigned ideology to the "superstructure" of a system driven by economic class conflict, Piketty claims for it a central role. At key points in history when one regime breaks down, he argues, what comes next depends on the ability of different political actors to formulate a new vision of how society should be organized.

Therein lies today's challenge. After the widespread dislocation caused by the financial crisis of 2008, and with increasing awareness of the scale of global inequality (thanks largely to Piketty and his collaborators), the prevailing economic orthodoxy - that market competition is the source of all good things, and public policy must be restricted to making markets work better - rings hollow to many people left on the wrong side of the income distribution. The bleakly unequal impact of the coronavirus pandemic on rich and poor may reinforce that discontent.

In short, the time is ripe for a new vision of society. After his earlier book's seemingly pessimistic message - that wealth naturally tends to concentrate - the Piketty of "Capital and Ideology" proclaims himself an optimist. To overcome both extreme inequality and virulent nationalism, he calls for a "social-federalist" ideology combining economic justice and cross-border cooperation, and for an economic order that embraces the ideas of equal investment in each young person's education, worker participation in management, a safety net guaranteeing everyone's basic needs and circulation of capital through progressive taxation.

But who will champion this cause? In the United States and elsewhere, the onetime parties of the left responded to the conservative revolution with a chorus of "me, too." Since the rise of the New Democrats in the early 1990s, the Democratic establishment has sworn its fealty to market competition, the private sector, small government, fiscal austerity and financial deregulation. Beginning with Bill "The era of big government is over" Clinton, party leaders actively repudiated what they saw as an embarrassing legacy of industrial unions, welfare programs and redistribution. Having repeated for decades that public policy must bow to the iron laws of economics, the Democrats "remain unable even today to perceive alternatives to the situation they themselves created."

The result is that economic elites in the United States have their choice of two party ideologies: one favoring educational achievement and rationality, the other entrepreneurialism and wealth. Both assume the primacy of competitive markets and justify their outcomes as the natural workings of a meritocratic system. Compared with earlier belief systems that conferred advantages based on birth or race, this shared ideology of meritocracy has the distinct advantage of justifying inequality as a pure product of natural (market) forces operating on a presumed starting point (however fictional) of equal opportunity.

But, as Piketty writes, "if redistribution between the rich and the poor is ruled out . . . then it is all but inevitable that political conflict will focus on the one area in which nation-states are still free to act, namely, defining and controlling their borders." And so, in the United States, a pro-market party that claims to defend rural, white, Christian America faces off against a pro-market party that embraces the image of a diverse, cosmopolitan, urban America. To the half of the population that has known only stagnant incomes and increasing economic insecurity, one party offers modestly beneficial economic policies bestowed by a technocratic elite; the other promises to restore their faded glory by winning trade wars and expelling immigrants.

In Piketty's story, now is the time to build a new coalition on the basis of a new ideology. In the United States, he nods approvingly at proposals by figures such as Bernie Sanders and Elizabeth Warren to increase taxes on the rich, implement a wealth tax and establish Medicare-for-all. Since the publication of the book, however, the Democratic primary electorate rejected its progressive wing, betting that Barack Obama's vice president, Joe Biden - a man who promised wealthy campaign donors that "nothing would fundamentally change" - stands a better chance of defeating President Trump than a full-throated call for economic justice.

Perhaps. But as long as the Democratic Party muddles along with the same old ideology of market-driven growth and supposed equality of opportunity, our political system will remain defined by two parties dominated by competing segments of the economic elite. The regime of inequality under which we live will not fall until one of those parties decides to stand up for economic justice and the 99%, not hypercapitalism and the 1%. And you can bet it won't be the Republican one.

Kwak is a professor at the University of Connecticut School of Law and the chair of the Southern Center for Human Rights. His most recent books are "Take Back Our Party: Restoring the Democratic Legacy" and "Economism: Bad Economics and the Rise of Inequality."

James Kwak is a professor at the University of Connecticut School of Law and the chair of the board of the Southern Center for Human Rights. His most recent book is “Take Back Our Party: Restoring the Democratic Legacy.”