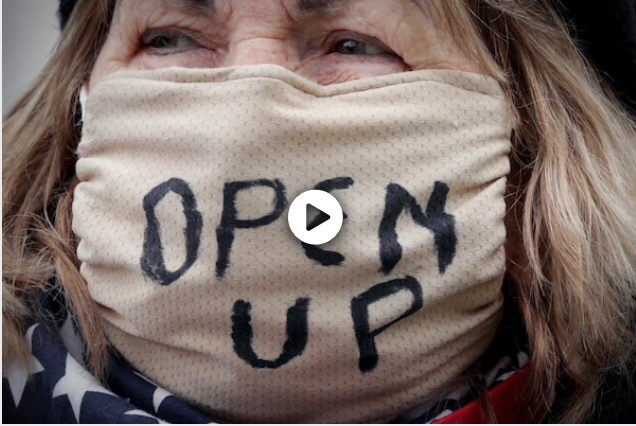 As coronavirus lockdowns loosen and some Americans flock to restaurants, beaches and other outdoor spaces for Memorial Day weekend, the question of reopening too quickly is striking an eerily familiar echo.

As coronavirus lockdowns loosen and some Americans flock to restaurants, beaches and other outdoor spaces for Memorial Day weekend, the question of reopening too quickly is striking an eerily familiar echo.

The global flu epidemic of 1918 remains the deadliest on record. According to the Centers for Disease Control and Prevention, the pandemic killed an estimated 50 million worldwide and over half a million in the United States. J. Alexander Navarro of the University of Michigan's Center for History of Medicine is one of the organizers of the "Influenza Archive," a collection of information cataloguing and studying the effects of the 1918 pandemic in 43 major U.S. cities.

The research sought an answer to a key question: Was social distancing effective in 1918 as a way of slowing the spread of the disease and saving lives?

Navarro said cities that closed schools and banned public gatherings fared better against the flu. "They had both lower peak and total overall morbidity and mortality cases and deaths," he said.

Current research tracking the success of social distancing efforts to ease the spread of the novel coronavirus point to the same conclusion.

But varying levels of enforcement combined with World War I created a variety of outcomes in 1918. That fall marked the disease's second and deadliest wave in the United States.

"The pandemic started in military camps first and foremost. So the military worked to try and control those epidemics in the camps," Navarro said. "The average Joe in the fall of 1918 was very much preoccupied with things like the Liberty Loan drives."

Philadelphia's infamous decision not to cancel its Liberty Loan parade in late September resulted in 1,000 deaths in the span of 10 days, making the city one of the hardest hit by the epidemic.

Other cities such as Denver lifted restrictions that November on Armistice Day to celebrate the end of the war, only to experience a deadlier spike.

"Pretty much every city that we examined reported on huge crowds immediately congregating downtown in stores and cafes and theaters and bowling alleys," Navarro said, adding that the crowding happened on the very day social distancing orders were lifted.

Navarro notes that the main difference between 1918 and the current coronavirus pandemic is the vastly different economic landscape - particularly the role of retail, restaurants, movie theaters and other small businesses. "They could shut down places of public amusement and not have the same type of impact on the local economy in 1918 because the manufacturing sector was so dominant," Navarro said. "This is an economy that's built on the service sector. So I think we're in for a much greater and more severe economic impact today than we were in 1918."

As states continue to grapple with the pandemic, many are easing restrictions and pushing to revive lagging economies. But leading health experts warn of a second wave of infection. Navarro is cautious about which lessons to draw from the past, noting advances in medical science and technology, but points to a worrying parallel in human behavior.

"Even though the historical context changes, there's going to be a great clamoring to get back to life as normal," he said. "There could be really terrible public health consequences as a result."