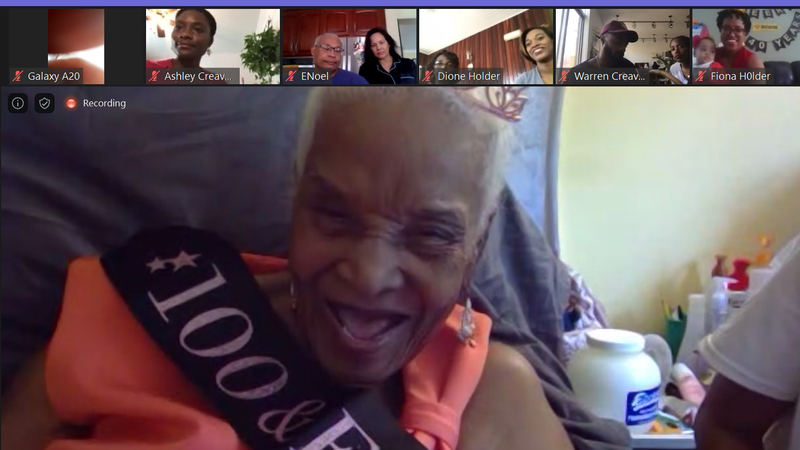 Victorine Creavalle laughs as her relatives congratulate her on her 100th birthday Sunday, May 24, 2020. MUST CREDIT: Washington Post photo by Julie Zauzmer

Victorine Creavalle has a life full of birthdays.

Add all the friends whose birthdays she has kept written in a tidy little book, and all the spouses of her children and grandchildren and great-grandchildren, and Creavalle has somebody to call and sing "Happy birthday" to almost every day of the year.

On Sunday, the woman of so many birthdays marked her own for the 100th time.

And many of her 83 descendants gathered on Zoom and in cars outside her Maryland home to wish a happy birthday to the woman who never forgets theirs.

"Lots of love and kisses, Mom." "Happy birthday, Granny!" "Hi, Auntie Vicky! Happy birthday!" "Queen Victorine!" more than 45 participants on the Zoom call said, filling the video frames with all the names that Creavalle has responded to in her life.

She wore a sparkly sash and a tiara that said "100," and balloons bobbed behind her head. In the video feeds, she saw her family wearing birthday hats and T-shirts they had made with her face on them.

Outside the window of the Springdale home where Creavalle lives with her daughter, Joy Creavalle, even more relatives drove into their balloon-festooned cul-de-sac, honking their horns and pulling down their masks to eat candy bars - 100 Grands.

Thelma Anthony, a friend, lamented on the call that she could not be with Creavalle in person, as she had imagined she would be on the day she became a centenarian. "You are an awesome inspiration to all of us for something we could achieve: to be 100, live a good life and raise an awesome, beautiful family," she said.

Creavalle raised her eight children in the South American country of Guyana, then watched as they moved one-by-one to the United States. In 1984, according to her daughter June Williams, Creavalle followed and settled in the Washington area, where Williams had moved to attend Howard University and several of her siblings had followed.

Today, Creavalle's descendants live all over the world: many of them in Maryland and Virginia, but others in Canada, England and Vietnam.

Creavalle was a teacher and then an elementary school principal before retiring and moving to the United States, and she has spent a century emphasizing the importance of education to her descendants. She takes tremendous pride in their accomplishments: the dozens of college degrees and PhDs among her children and grandchildren, and the great-grandchildren currently in college and medical school.

Before the coronavirus pandemic, her family visited often, with five or six cars filling the cul-de-sac every weekend. Joy usually cooked for them, carrying on Creavalle's tradition of making Guyanese specialties every day until she was 88 and baking bucketloads of pastries to give to friends and neighbors.

"If you ever went to her house, something had to be put in your hand before you left," Williams recalled. "You don't leave without a meal."

Creavalle has enjoyed the closeness of her children in the Washington area, especially since her husband died more than 20 years ago.

She stopped walking at 95 and relies on a wheelchair now. Dementia has robbed her of much of her short-term memory, though not her favorite old stories.

She spends her time, many days, watching Steve Harvey and "Shark Tank" on television while sitting beside two blankets that Joy has inscribed with the names of all 83 descendants. (When a second great-great-granddaughter was born a few months ago, Joy found more room to squeeze in another name.)

A birthday during a pandemic meant the family could not have the huge celebration that it might have otherwise. The party for Creavalle's 90th birthday drew more than 200 guests.

But when Joy brought out a sunflower cake, the dozens of well-wishers watching from their separate homes sang "Happy Birthday."

Creavalle was, of course, the first to start singing.